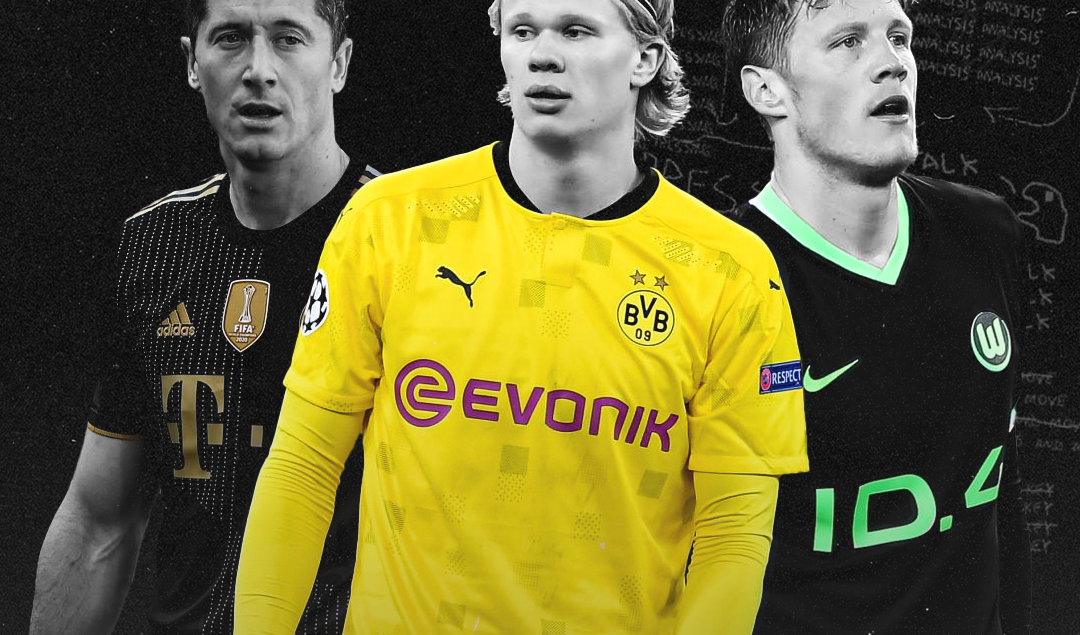 Right, let’s get it out of the way quickly. Because, curiously, it seems like the rest of Europe hasn’t quite registered what Robert Lewandowski (who’s known for scoring goals, you know), managed to achieve this season.  In the last 365 days, across all big five leagues and in Europe, Lewandowski has the most.

And that’s counting European games, where he (astoundingly) had the occasional blank. In the Bundesliga, he scored 41 goals. Forty. One. In a thirty-four game season. He broke a record that most expected to live forever: that of Gerd Müller’s 40-goal season in 1971-72.  He’s the most well-rounded striker in the world (at the moment), he doesn’t just score he assists too (7 times in 2020-21), and he’s the kind of goalscoring machine that only comes along once in a generation at centre forward.

There’s nothing to possibly be said that makes him look even more incredible than he is.  Except, maybe, that he missed 5 Bundesliga games through injury. And still scored 41 times. Christ.

Now, a disclaimer. Wout Weghorst is this writer’s favourite player at the moment. How could he not be? He’s 6’6”, has a ridiculously good touch for a man of his size (a cliché that should never go away), and has a mesmerising smile. As if that wasn’t enough, he’s also a phenomenally well-rounded striker.

Wolfsburg are unique, in the Bundesliga, in the respect that they can actually defend. Oliver Glasner’s side isn’t necessarily the prettiest or most thrilling, but their structure is excellent, they press when necessary and they defend in a mid-block, rather than simply embracing a sort of resigned chaos like the rest of the league. Most important are their two key figures at either end of the pitch; Maxence Lacroix at centre back, and Wout Weghorst up front.

He leads the line in more ways than one: he presses intensely, for one, and his pace will startle any casual watcher who expects balls to be lumped up to him. Rather than simply being a hold-up striker (though that is one is his most prominent strengths) Weghorst instead leads the counter by running into channels, linking play from deep with his other midfielders, and getting on the end of crosses. All this for someone who’s also 6”6 and, yes, scores more than the usual share of headers, is a recipe for genuine fun.

It’s no surprise that he’s different: he made it here from amateur football, after being told he wouldn’t make it at 19, and he’s now scoring at just over a goal every two games for Wolfsburg (63 in 120 appearances). He scored 20 goals and assisted 8 times (with two penalties in there), and with a non-penalty expected goals metric of 0.48 (per FBref), he’s clearly an incisive finisher too.

But, most importantly, he’s different. He’s a goliath with a 400m sprinter’s engine. He’s as impressive with his feet as is with his head. And that’s just brilliant.

When André Silva went from AC Milan to Eintracht Frankfurt, initially on loan, it was a rescue job. His time at Milan was paltry, his stock had fallen (outside of Portugal), and his first season at Frankfurt (2019-20) was haunted by the recently-departed spectre of Luka Jović, whose shadow Silva was struggling to escape. Yet this season, as the goals reigned in Germany, he has found himself rejuvenated and resurgent.

Most would describe him as the kind of poacher every big team needs. Comparisons to Sergio Agüero weren’t amiss at a young age, but Silva had, impressively, evolved into a much more rounded centre forward. When Jović returned on loan to the place where he made his name, he was second fiddle to Silva – and rightly so.

The pair combined to form something of a partnership halfway through the season, but Jović only made eight starts for the campaign. It was with Daichi Kamada and Filip Kostić that Silva flourished; scoring 28 in 32 appearances, and getting on the end of five Kamada assists, and six Kostić assists.

He and Kostić were Frankfurt’s most important weapons – the latter offered the width and speed, and Silva offered both the movement and ability to link up and instigate the counterattack. Far from a poacher, Silva became as prominent in the build-up of moves as he did at the end of them. The Portuguese has become a prodigious centre forward; a renaissance that should make the elite European clubs take notice. André Silva is back and better than ever.

The name on the lips of everyone in world football, this was very much Erling Haaland’s season of arrival. Whether it be carrying Dortmund through the Champions League, or scoring 27 in 28 appearances (27 of which were starts), Haaland is the heir apparent to Robert Lewandowski’s Bundesliga throne – and the most concrete evidence that Lionel Messi and Cristiano Ronaldo finally have a duo to whom they can pass the torch (such was the intensity of the “Kylian Mbappé vs. Erling Haaland, who would you buy?” debate).

But what exactly is it that makes him so appealing? Most eyes are drawn in by the ridiculously emphatic finishes, or the raw combination of pace and power; but those are hallmarks of a prodigious young kid, not necessarily those of football’s most in-demand striker.

He scored 28 times, and 25 of those were penalties, but his non-penalty xG was 0.77 – effectively that means he was outperforming the goals he was expected to score, but about 0.3 a game. With someone as prolific as Erling Haaland, that doesn’t just mean he’s getting lucky, it means he’s an elite finisher. And when you combine pace, power, AND an elite finishing ability, you get something truly special.

There’s also the intangibles: his movement’s excellent, his mentality is unwavering, and you can tell he absolutely loves it when goals are scored – by him or his teammates. Nothing’s quite as enjoyable as when the young Norwegian slips a perfect pass into his teammate, who scores and is promptly barrelled into by an exuberant 6’4” cyborg who wants to revel in the joy of football.

Finally, there’s the most surprising breakout striker of the lot, and perhaps the most unique too. It’s not often you see someone taller than Wout Weghorst, but at 6’7”, Stuttgart’s Saša Kalajdžić is a behemoth of a striker. Except, that’s not exactly how he plays. Yes, around half of his 16 goals for Stuttgart in 33 appearances this season (23 of which were starts) came from his head, but he’s more often seen linking play together than necessarily waiting in the box for crosses.

Part of it has to do with how Stuttgart play – facilitating the rabid pace of Silas (formerly Wamangituka) and the trickery of Nicolás González means having someone in the middle who can feed the ball to them on the counter, but Kalajdžić’s most impressive traits come to life more with his feet than his head. He’s got an effective passing range, effectively operating as a nine and a half in transition, and his goals often come with him at full pelt, making a run into the box, as opposed to some deft movement off the defender.

Don’t be fooled, though, just as Erling Haaland is an elite finisher outperforming his xG, so too does Kalajdžić outperform his own xG (by a similar 0.3 per 90), but with a much smaller shot count than any of the other strikers in this list, such is the position of Stuttgart as a recently promoted Bundesliga team.

What’s most curious is how he’d fit into other systems. He’s only recently been able to step into the team – having returned from serious injury at the start of the season to break into Pellegrino Matarazzo’s side – but already his unique traits and proficiency in front of goal have made people notice. If he were to get a move to “one of the big clubs”, would they be able to find their own innovative way of using the 6’7” Austrian? He’s certainly the most intriguing of all the Bundesliga’s goalscoring predators.