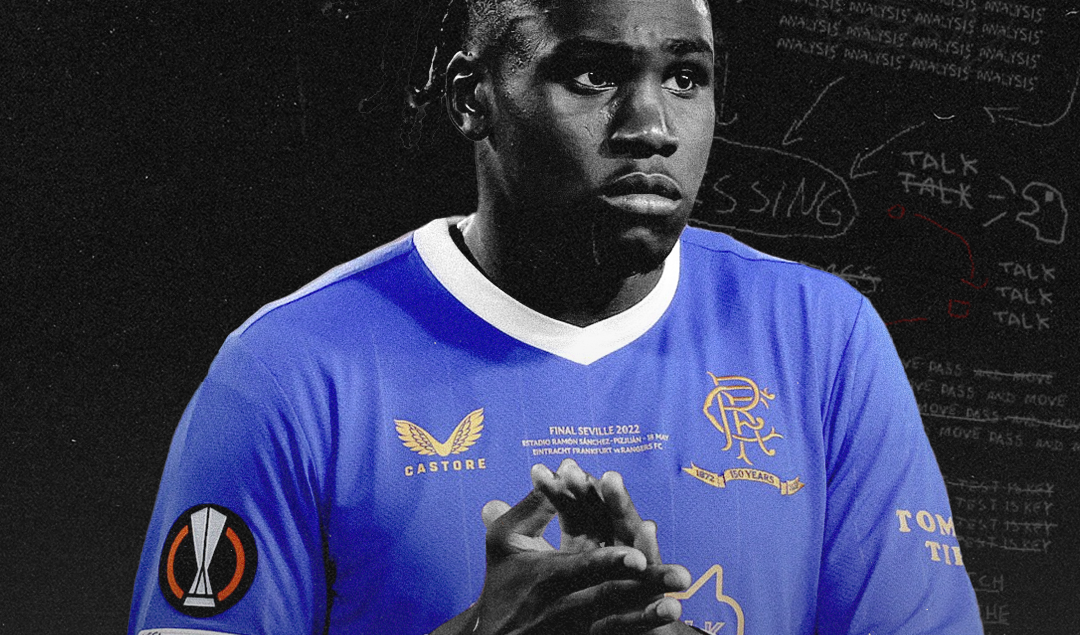 Multiple Rangers players have been catapulted into stardom in recent weeks, the likes of Joe Aribo scoring in an Europa League final taking centre stage whilst other heroes from this unexpected run include Ryan Kent and John Lundstram with the latter scoring late on against RB Leipzig to set up the Frankfurt final.

A name that is now on everyone’s lips has seemingly come from nowhere however, Calvin Bassey exciting everyone after a brave defensive display against Frankfurt in Seville.

Rangers fans have been singing his praises domestically for some time now, their secret now known – the 22-year-old winning Young Player of the Season for Giovanni Van Bronckhorst’s Gers this campaign, a regular at the back after only make eight appearances the season before.

Now, after starring on the big stage in the Europa League final, Calvin Bassey is a wanted man. After leaving Leicester City behind as a youngster, playing in Scotland regularly has seen him excel.

With ex Gers manager Steven Gerrard rumoured to be interested in Bassey’s services, he could well be a Premier League star in the not-so-distant future. It hasn’t been the most conventional route to stardom for Bassey however, the young defender born in Italy before featuring for Leicester at youth level for a number of years.

Multiple appearances in the U18 and U23 ranks at Leicester never materialised into Bassey signing on for the senior side, the Foxes allowing the youngster to leave for Rangers on a pre-contract. After five years on the periphery at Leicester – no first-team appearances afforded to a highly rated youngster – Calvin Bassey would have to cut his teeth further afield to prove a point.

A league that suffers in terms of glamour – the SPL was often seen as a division dominated by Rangers and Celtic with the rest making up the numbers – Bassey won’t have turned his nose up at the prospect of playing at Ibrox.

He also joined the Gers with the club on the up, any past financial turmoil put to one side with Steven Gerrard aiming to dethrone Celtic at the top of the tree as boss. It was an opportunity for Bassey to show to everyone back at The King Power Stadium what they were missing out on, an opportunity to impress in the senior game.

His first season at Ibrox did see his first-team minutes somewhat limited, Bassey unable to break through into the starting eleven consistently due to the likes of Leon Balogun, Filip Helander and main rock at the back Connor Goldson often preferred to the youngster at the heart of defence.

Moreover, with the Gers going unbeaten for an entire campaign and only shipping thirteen goals in the process over 38 league matches, Steven Gerrard didn’t have any real reason to tinker with a highly effective formula.

The youngster started a total of eight SPL games during Rangers’ title-winning season, a far cry away from the star role he’s managed to attain under Giovanni Van Bronckhorst at Ibrox this campaign.

He’s even played down the flanks for Rangers recently, Bassey’s fearlessness when striding up the pitch seeing him preferred to Borna Barisic at times as a wing-back option. He’s become a versatile player across the back for Rangers this campaign, more appearances in the first team fold springing up subsequently.

Bassey didn’t help himself either during his first full season in Glasgow though, a scandal involving a number of players partying amidst strict COVID measures in Scotland saw Bassey and other youngsters such as Nathan Patterson handed a six-game suspension.

With Rangers strolling to their first SPL title in 10 years, the Gers cruising to this title around the time of this scandal, a number of the Rangers youngsters simply got carried away in their newfound success.

The unbelievable achievement of winning their first SPL title in a decade would see Steven Gerrard depart Ibrox at the mid-point of the 2021-22 season, Rangers now on the lookout for a figure who could continue and surpass what Steven Gerrard had done in the hot seat.

Former Rangers player Giovanni Van Bronckhorst would be Gerrard’s replacement, the 47-year-old impressing during four years in his native Netherlands as Feyenoord boss.

Still, nobody could’ve predicted when he was unveiled what he’d be able to achieve in such a short space of time at Rangers – guiding Rangers to an unprecedented European final, Calvin Bassey equally surprised at his starring role in this run to the Final after limited first team minutes the season before.

Bassey’s 2021-22 season will have many at Leicester regretting their decision to offload the Nigeria international to Scotland, Bassey enjoying his football and excelling with Van Bronckhorst at the helm.

Away from helping Rangers to their first European final since 2008, Calvin Bassey was also integral to domestic success.

A sustained spell in the side would see Rangers go on a lengthy winning run in the league, Bassey even registering an assist along the way away to Motherwell in one of Steven Gerrard’s final games as Gers manager.

A hopeful cross into the box from Bassey – patrolling down the flanks as a left back – would be finished off by his partner in crime James Tavernier at right back. Tavernier smashing it into the Motherwell net, Bassey involved going forward in a convincing 6-1 win.

Bassey also shines when adjusting back to centre-back duties, a robust presence at the back. He was only dribbled past five times all season in the SPL, a dominant figure that routinely overpowers the attacker trying to race through.

This was apparent throughout the RB Leipzig second leg match at Ibrox in the Europa League too, Bassey shepherding attackers such as Yussuf Poulsen all night forcefully with a brilliant strike from Christopher Nkunku the only breach of a strong Rangers defence. He often pushes up the field in order to get to the attacker quickly, retrieving the ball more times than not to then spring a Rangers attack.

Although Rangers would narrowly miss out on retaining the SPL title – Ange Postecoglou’s revitalised Hoops pipping Rangers to the title by four points – Van Bronckhorst would deliver some domestic silverware by lifting the Scottish Cup.

In a tense match at Hampden Park, two extra time goals from Ryan Jack and Scott Wright would see Rangers lift the Scottish Cup for the first time in 13 years. Bassey would start this Final at left back, another impressive display on the big stage for Rangers’ number 3.

Bassey would constantly cross into the Hearts box throughout the initial 90 minutes, constantly forward down the channels to try and break the deadlock. A number of crosses would just evade the Gers players in the box, Joe Aribo unable to connect properly with one header in the first half at Hampden whilst Manchester United loanee Amad Diallo was also unable to finish off a teasing Bassey delivery.

At points, Bassey was showboating on the ball at the expense of the Hearts players attempts to mark him – the no-nonsense centre-back role taking a backseat, Rangers’ number 3 playing like a winger at points at Hampden.

Yet, even when the score-line was secure at 2-0 and the clock ticking away in Extra Time, his no-nonsense approach kicked in. A Hearts attack was snuffed out by Bassey tracking back and tackling before any attempt at goal was registered in extra time, determined for the clean sheet to remain.

A Man of the Match display in the Scottish Cup final, a player for the big stage. This all came days after the heart-breaking Europa League final loss in Spain, Frankfurt winning on penalties after a cagey affair.

The ex-Leicester youth prospect turned Rangers hero had another excellent match in the Final, Bassey a colossus at centre-back for most of the match. Unfortunately, a lapse in concentration at the back would allow Frankfurt to level the match in normal time – Rafael Santos Borre sneaking in-between both Goldson and Bassey to poke home past Alan McGregor.

In extra time, a calamitous error from Bassey nearly lost the Final too – losing the ball after dawdling on it, Bassey thankfully managed to compose himself and slide in last minute to stop the Frankfurt man from firing in a shot.

Still, for a youngster who had never experienced the high stakes of an European final before that drawn-out match, Calvin Bassey starred once more. After selling Nathan Patterson to Everton, it looks as if Rangers might well have to concede that Calvin Bassey will be the next departure to the Premier League.

However, Rangers won’t let their new star-man go for cheap. Even with pass affinities to Steven Gerrard if the Aston Villa rumours are true, the price tag at the moment looks to be around the 25 million pound mark and Rangers won’t budge.

With Tyrone Mings flattering to deceive this season, Calvin Bassey could provide healthy competition to a defender recently snubbed by Gareth Southgate for England’s upcoming Nations League fixtures. Aston Villa won’t be alone in trying to sign Bassey, a defender high in demand after an electric season in Glasgow.

Starring in both the Europa League Final and the Scottish Cup final, he’s a player for the big occasion. Premier League football looks to be his next big test, the 22-year-old in dreamland.