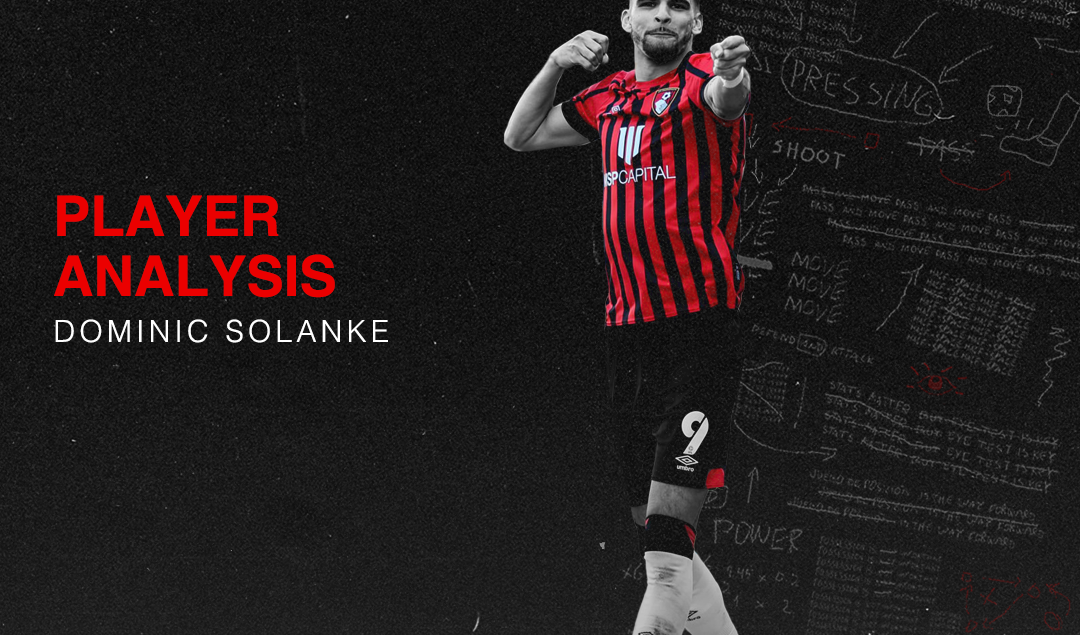 After scoring goal after goal for both club and country at youth level – scoring 20 goals in 25 appearances for Chelsea U18’s in the 2013-14 season – the world looked to be Dominic Solanke’s oyster.

However, nearly a decade on from being touted as one of the best young prospects around, his career up to this point hasn’t been without some bumps along the way.

From failing to break into the first team mould at Chelsea to his disastrous move to Liverpool, Solanke might not have lived up to his early hype. But, at this current point in time, he’s integral to AFC Bournemouth up top.

Following a rocky few years with his confidence shot, Bournemouth have persevered and reaped the rewards as a result. 24 goals this season from the Cherries’ number 9 has helped Scott Parker’s men to 2nd spot in the Championship, scoring and assisting in their last outing to cement their place near the top versus Huddersfield.

After such a rollercoaster of a career in such a short space of time – Solanke still only 24 – he’s playing at his assured best now for Scott Parker’s promotion-chasing side.

The early parts of Dominic Solanke’s career saw him join Chelsea at just the age of eight, signing for the Chelsea with high hopes for his future. His early career saw him score goals for fun, racking up ridiculous numbers for his age group.

The Cobham product would feature in the England youth sides as a result, a key component to the U17 team that were crowned winners of the 2014 Euros competition.

Solanke would finish the tournament as joint-top scorer overall, netting the all-important strike in the final before England eventually ran out as winners in a penalty shoot-out against Netherlands to lift the trophy.

He would also receive another personal accolade off the back of his starring role in England’s triumphant success, winning Youth Player of the Year in 2014. He would even be invited to train with the senior squad as a result, so many dizzying highs for Solanke to process over a short period of time.

Was it all too much for Solanke looking back? He would however remain unphased at the next tournament he featured in, winning the Golden Ball at the U20 World Cup in 2017 with England once more reigning supreme in the Final.

Yet, with all this success in multiple different England youth teams, a Chelsea first-team appearance was passing Solanke by.

A club notorious for loaning out their youth assets as opposed to giving them time in the first team fold, Solanke would be shipped out to Vitesse in order to show off his skills in the men’s game.

This would be the first sign of Solanke’s struggles in the men’s game, unable to live up to the highs of scoring twenty-plus for the Chelsea Academy.

Known as a physical presence up front, this gave Solanke an obvious advantage at youth level – a constant nuisance for defenders, his physicality winning more times than not against defenders who couldn’t match his strength and application whilst they’re still maturing and growing.

Going from being the top scorer at youth level to having to then go into a new environment from scratch, it proved to be a steep, and ultimately, worthwhile learning curve for the ex-Chelsea man in the long term.

Solanke was just another youngster on the Chelsea production line, shipped out to feeder club Vitesse Arnhem – the likes of Mason Mount and Nemanja Matic amongst a number of loanees to the Dutch club from Chelsea – in order to make a name for himself.

His first goal for Vitesse showcased the physical nature of the Chelsea loanee, taking down a long ball pumped forward expertly before holding off the Cambuur defenders to slot home.

Other strikes would include a rebound effort against Groningen, staying alert and firing home after a long-range effort from Marvelous Nakamba stung the keeper’s palms.

None of his strikes for his adopted yellow and black team stood out as screamers, very much a poacher sniffing at any indecision from opposition defenders – a goal against FC Twente evidence of this approach, a scuffed clearance allowing Solanke to hold off the opposition goalkeeper before scrambling an effort in.

Although Solanke would finish as Vitesse’s third most prolific player – one goal behind Milot Rashica in the rankings – Chelsea would cut ties with their former Academy player.

The severing of these ties would, in tow, see Solanke’s career falter as a result – a move to Liverpool a colossal failure, the usual threat Solanke possessed up top vanishing at Anfield in his few years at the club.

Idolising Didier Drogba as a child, leaving Chelsea would have been heart-breaking for Solanke and a heartbreak he’d have to adjust to quickly. Thrust into the spotlight as an exciting new option for Liverpool in attack, his move to Anfield would prove to be nothing short of disastrous.

His only goal for Jurgen Klopp’s Reds would come in an end of season clash against Brighton, scoring Liverpool’s third of the afternoon in the Anfield sunshine as the Reds ran out 4-0 victors – Solanke’s shot cannoning in past Ryan in the Seagulls net, his only goal in Liverpool colours coming in a dead rubber contest when the pressure had subsided.

After failing to live up to the billing of being this fresh and exciting talent for Liverpool up top, Eddie Howe gambled on restoring Dominic Solanke to his past glories for The Cherries.

Often scrutinised for paying way over the odds for players in the Bournemouth dug-out – breaking Bournemouth’s club-record transfer fee for Jordon Ibe sticking out – Solanke is now repaying his astronomical transfer fee at the time under Scott Parker’s guidance.

Solanke hasn’t been an overnight success down on the South Coast, three goals in his first full season for Bournemouth worrying spectators, but he has become a crucial cog up top since The Cherries’ relegation that same campaign.

He is back to his assured best, replicating the same goalscoring feats he managed in youth football as a now confident 24-year-old starring for Scott Parker’s promotion hopefuls.

His goals this season have seen a rejuvenated Solanke, Bournemouth’s number 9 clearly recognising he’s back to his best after years of impostor syndrome kicking in whilst he was regularly firing blanks.

An early-season strike against Birmingham saw this confidence kick in, brushing off the Birmingham defender before cleverly finding the net.

His poacher-like awareness is also back, scoring in back-to-back games against Barnsley and QPR by being in the right place at the right time – ice cold precision from a man who was written off after his poor spell at Liverpool, now a crucial component to a top-end Championship side.

He isn’t relenting either, three goals in his last three games helping to cement 2nd spot in the league for his side after inconsistent form.

The high press from Scott Parker’s men on the day too much for the Terriers to handle, Solanke nearly opening the scoring early on with a fierce strike after a Cherries block from Huddersfield passing out from the back.

Solanke would also hit the bar, the hunger to score goals obvious for all to see again. He would turn provider for the opener in this promotion crunch clash however, running through and playing Jaiden Anthony in to slot home with ease.

He would eventually score however, his 23rd strike of the season and Bournemouth’s third of the day killing the contest – the one-time starlet now an accomplished second-tier striker, slotting home to give Scott Parker’s men a comfortable three points.

Comfortable in his current environment, it’s clear to see Solanke has recaptured his previous best under Scott Parker’s guidance this season.

Second in the top-scorer charts for the second tier, only beaten by Aleksandar Mitrovic’s ridiculous figures, he is striking fear into opposition defenders again as he did within the Chelsea and England youth set-ups.

With Bournemouth looking likely to go up in 2nd spot, will Solanke be able to finally show off his true ability in the top flight?

If the Cherries do return to the top flight this campaign, you’d expect Solanke to be eager to prove any naysayers wrong.

After having to mature quicker than most, and with his confidence now back after a bumpy few years, Solanke will be pivotal in the Premier League for Bournemouth as their main talismanic striker.