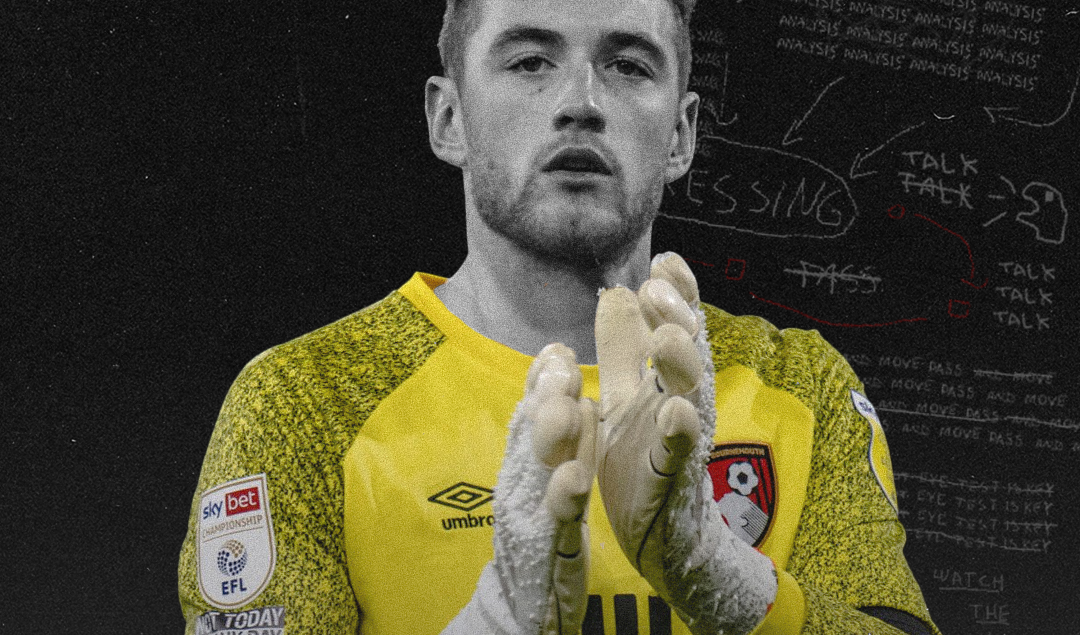 After being a bit-part player for so long down on the South Coast, Mark Travers has slowly become one of the best goalkeepers in the Championship this season under Scott Parker.

Making fleeting appearances here and there in the Premier League and the second tier for The Cherries, he has become a first-team regular this season in Bournemouth’s hunt for automatic promotion.

Keeping his side singlehandedly in games this campaign – a heroic display away at Blackpool denying The Tangerines countless times – Bournemouth were able to get a last gasp win on their travels with his fellow teammates heavily indebted to their standout keeper.

A player who has been rewarded for his patience, he has taken the opportunity well. With the sternest defence in the division and 12 clean sheets under his belt, Bournemouth’s goalkeeper will be crucial in the promotion run-in.

Still only 22 years of age, it feels as if Bournemouth’s number 42 has been around for far longer than his youth suggests.

Bursting onto scene with a Man Of The Match display against Tottenham Hotspur at just 19, the Irishman making a number of outstanding stops to keep out the likes of Heung-Min Son, his path to Cherries success very rarely sees the light of day.

He wasn’t a homegrown product of the Cherries Academy, instead coming from further afield. Travers wasn’t even initially a goalkeeper by trade, playing in a number of outfield positions when starting off as a youngster at local sides Confey and Lucan United close to his hometown of Maynooth in Ireland.

He would join Shamrock Rovers shortly after, a well-established club within the Irish league system before AFC Bournemouth would come calling for his services.

Now established as a goalkeeper, he would link up with the U21’s down on the South Coast after impressing as a trialist.

Still only 17 at the time, his ascent from playing amateur football on the outskirts of Dublin to featuring for a club established in the Premier League was impressive.

Yet, Travers would have to remain grounded as a young goalkeeper. A victim of always having a far more experienced and talented keeper above him would limit any first-team chances, the former Celtic man Artur Boruc ever-present in net during his first season at the club.

This would become a common theme, battling against another veteran in Asmir Begovic alongside the emergence of Aaron Ramsdale before his big Arsenal move.

Travers would have to go down the loan route in order to get minutes in the senior game, moving to nearby Weymouth to adjust to the demands of men’s football.

His first ever senior game would culminate in a feat not many goalkeepers can pull off, Travers somehow scoring in his first ever match for The Terras on loan.

Lofting a goal-kick over the Bishops Stortford keeper, unintentional or not, the ball soared over the opposition keeper and straight in.

Inspired by his earlier days as an outfield player, his new teammates all rushed to congratulate the teenager on his one-in-a-million strike.

What Next for Former Tranmere Captain Scott Davies After Being Forced Into Retirement?

Travers would impress for the non-league side, making a total of 23 appearances for the Southern Premier League Division club at the time.

The season after would see him granted a start in the Premier League, facing off against Spurs in an important match in his early fledging career.

As has been mentioned above, the young Irishman picked up a Man of the Match accolade on his full Premier League debut – a number of brilliant saves on the day, denying Dele Alli’s powerful header with an equally powerful glove in the contest.

His interventions in net, alongside two red cards for the opposition, allowed The Cherries to pick up a win over Spurs courtesy of a stoppage time goal from Nathan Ake.

Still, even after stealing the headlines with a mammoth display in net, his opportunities in the first team fold would continue to be fleeting.

His Tottenham heroics would alert his national team however, making his International debut for the senior Republic of Ireland side against Bulgaria in front of a lesser home crowd in 2019.

Rising up the ranks through the U15’s to the senior set-up, it would’ve been a proud moment for the Irishman.

Fast forward a few years, with the crop of Bournemouth goalkeepers diminishing after a failed promotion effort saw Asmir Begovic depart, Scott Parker decided to utilise the Irish shot-stopper when other managers such as Eddie Howe or interim boss Jonathan Woodgate were too hesitant to give the Cherries keeper a go.

His one-off Man of the Match display against Mauricio Pochettino’s Tottenham wasn’t a fluke, a season’s worth of such brilliance playing out with the Irishman gaining a reputation as the best keeper at the level.

A number of victories recently have seen Scott Parker’s Cherries dig deep, Mark Travers keeping the opposition at bay alongside his backline before a flurry of late goals give Parker’s men another win to add to their tally.

Keeping in touching distance with Fulham at the top of the division will be crucial, Mark Travers delivering an unbelievable performance back in December at Craven Cottage.

Marco Silva’s side are prone to sticking four or five past the opposition with ease, but with Bournemouth having a reliable brick wall in net, Travers thwarted any chances of a comprehensive win for The Cottagers.

Denying Kebano with his feet was an impressive stop, alongside a big arm swatting away a towering Fulham header before Kebano wastefully shot into the side netting.

The Fulham pressure would eventually result in a late equaliser, but if it wasn’t for the timely saves of their trustworthy shot-stopper, The Cottagers could well have run riot.

With an ever-closing points gap between 2nd and 3rd in the Championship, Travers could well be the difference-maker in net in securing a draw or even a win when a loss looks likely.

After some poor form had seen Scott Parker’s men slip away from the top of the league – complacency creeping in for The Cherries – a pivotal away win at Barnsley has seen three more wins chalked up right off the back of a 1-0 win at Oakwell.

A nervy affair throughout, even with Barnsley occupying the relegation zone, Travers was pivotal once more.

The Irish goalkeeper denied a point blank chance from Callum Styles right after Phillip Billing had opening the scoring, getting down quick to deny the talented midfielder after a poor kick out from Travers nearly caught Bournemouth napping.

He would deny a whole host of opportunities, staying focussed to stop Styles once more with a solo effort whilst Devante Cole evaded a number of Bournemouth markers to nearly sneak an effort in from a free-kick. But, Travers was alert and palmed the chance away to safety.

Even playing the final few moments with ten men, the Cherries away support knew an effective shut-out would be sealed with the ever popular number 42 in goal. Kickstarting some much-needed form after this tense win, The Cherries have Travers to thank for such a turnaround in fortunes.

Frozen out from the International picture recently – Manchester City loanee Gavin Bazunu preferred between the sticks – Travers will have another battle to contend with to seek the number 1 jersey for his country.

But, if the patience and determination of the Irishman at club level is anything to go by, he could well be a crucial keeper for his country at some stage too with a lot of exciting talent coming through under Stephen Kenny in the Republic of Ireland hot-seat.