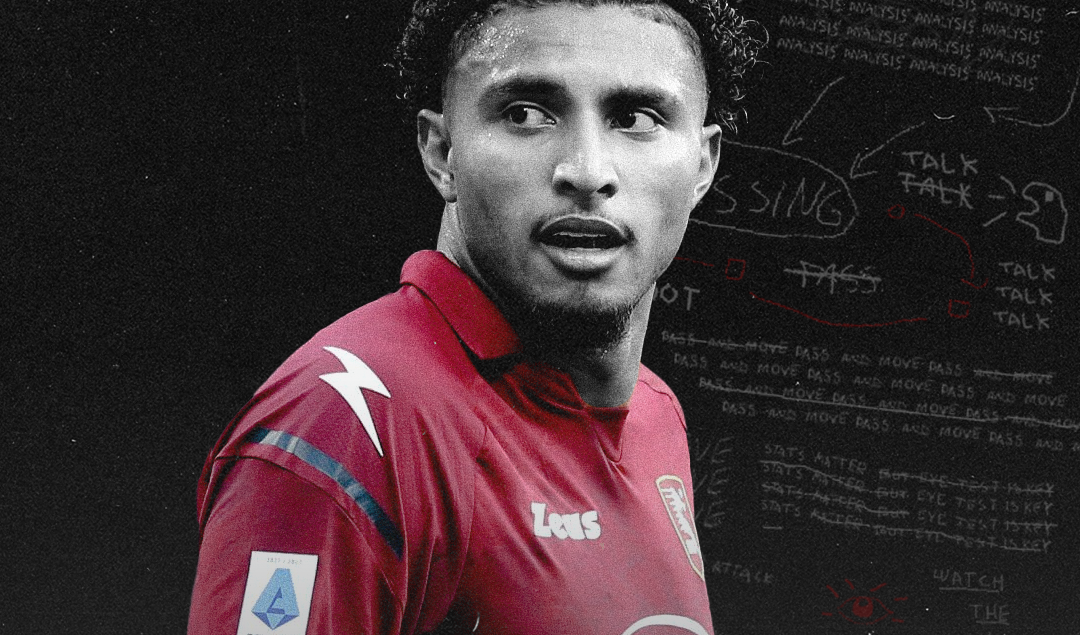 Salernitana remarkably survived relegation from Serie A in the first time in its history despite a horrendous start to the 2021/22 season and its status in Italy’s top flight was in doubt due to its ownership scenario.

Danilo Iervolino succeeded Claudio Lotito as the owner of the southern Italian club, who had to sell the club before the end of December 2021 due to already owning Lazio in Serie A, and the new patron purchased several players that inspired the Granata’s miraculous escape.

One of those signings was Brazilian midfielder Éderson José dos Santos Lourenço da Silva, better known as Éderson, and not to be confused with his namesake Ederson Santana de Moraes, who plays in goal for English club Manchester City and the Brazil national team.

Éderson was purchased from Brazilian giants Corinthians for a reported fee of €6.5 million in the winter transfer window and he became a revelation in the Salernitana midfield. His performances for the southern Italian club attracted the interest of Atalanta, who acquired the 23-year-old for an estimated figure of €21 million.

With the likes of Marten de Roon and Remo Freuler being 30 years of age or older, and Matteo Pessina being sold to Monza, Éderson will be an option for the present as well as the future alongside Dutchman Teun Koopmeiners. 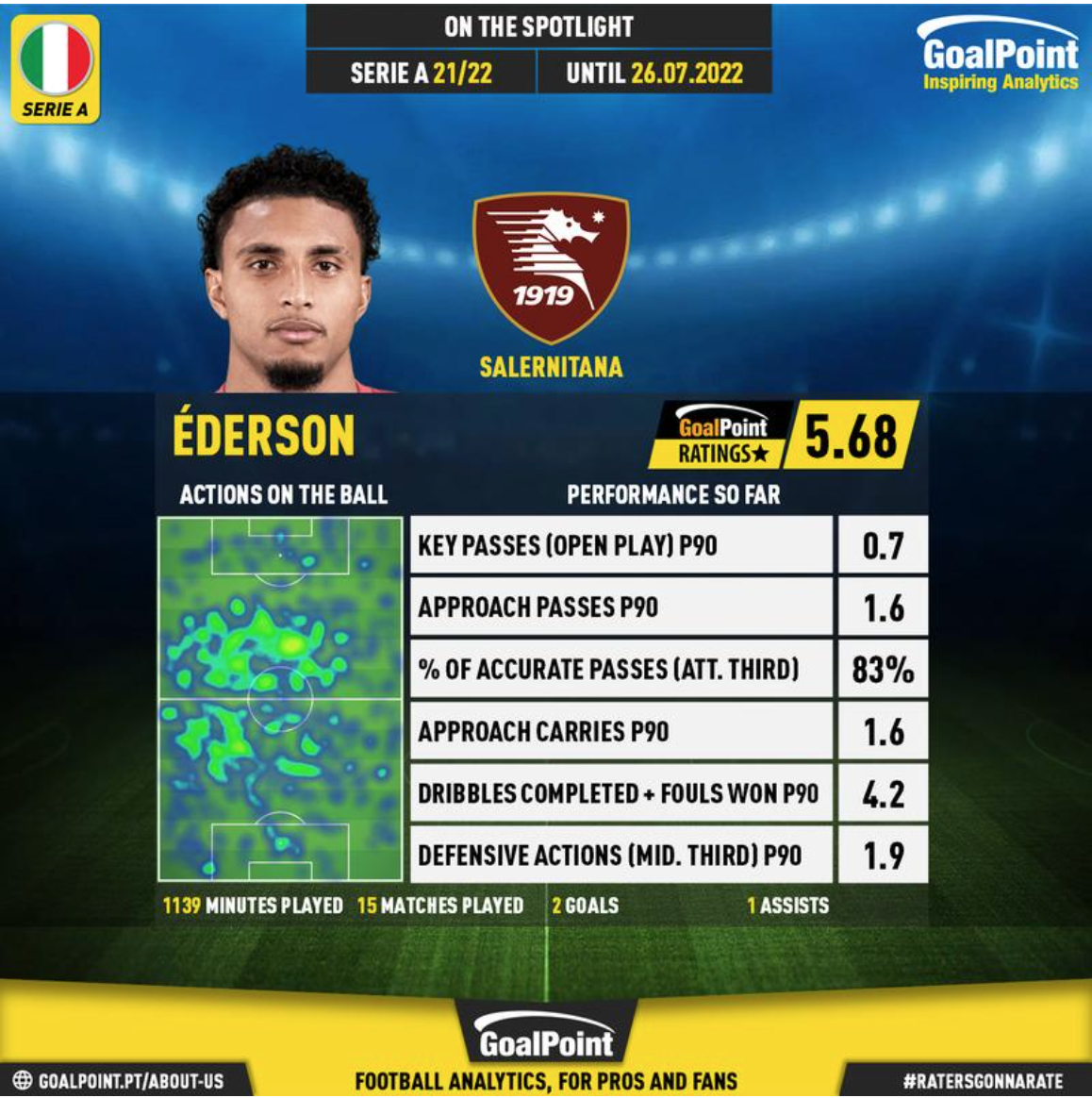 Éderson appeared in 15 Serie A matches throughout the second half of the 2021/22 Serie A season for Salernitana, scoring twice and supplying one assist. Most of those games were under manager Davide Nicola in the 3-5-2 formation and the Brazilian was usually one of the three central midfielders alongside Lassana Coulibaly and Emil Bohinen.

In a squad that was designed to defend first and then hit on the counter-attack, the 23-year-old was a midfielder who could win the ball back and also bring it forward. Although he was involved directly in just three goals, Éderson was an important part of the Granata’s attacking play thanks to his ball-carrying abilities.

According to GoalPoint, the Brazilian midfielder averaged 0.7 key passes in open play, 1.6 approach passes, 1.6 approach carries, 4.2 dribbles completed, and 1.9 defensive actions in the middle third per 90. He also completed 83 percent of passes in the attacking third and was fouled 4.2 times per 90.

Based on these statistics, Éderson played an important part in launching Salernitana’s attacks whether it would be through dribbling or making the right passes. He was able to provide a link between the midfield and the forwards as well as retrieve the ball in the middle in the park.

It was his importance to the Granata’s attacking play and skills that also drew the attention of his opponents, who would try to nullify him, even if it was not in the fairest of ways.

The heat map illustrates that the Brazilian was often present in the middle third of the pitch and that his presence would often be in the central channels or move towards the left side. He didn’t venture too often into the opposition penalty area or drop back into his own one a lot, and he was rarely spotted on the right flank.

This might be tactic opposition teams could consider in 2022/23. If Éderson is dangerous on the left flank or down the middle, opponents might force him to move towards the right wing and see if he can cope or wither away. 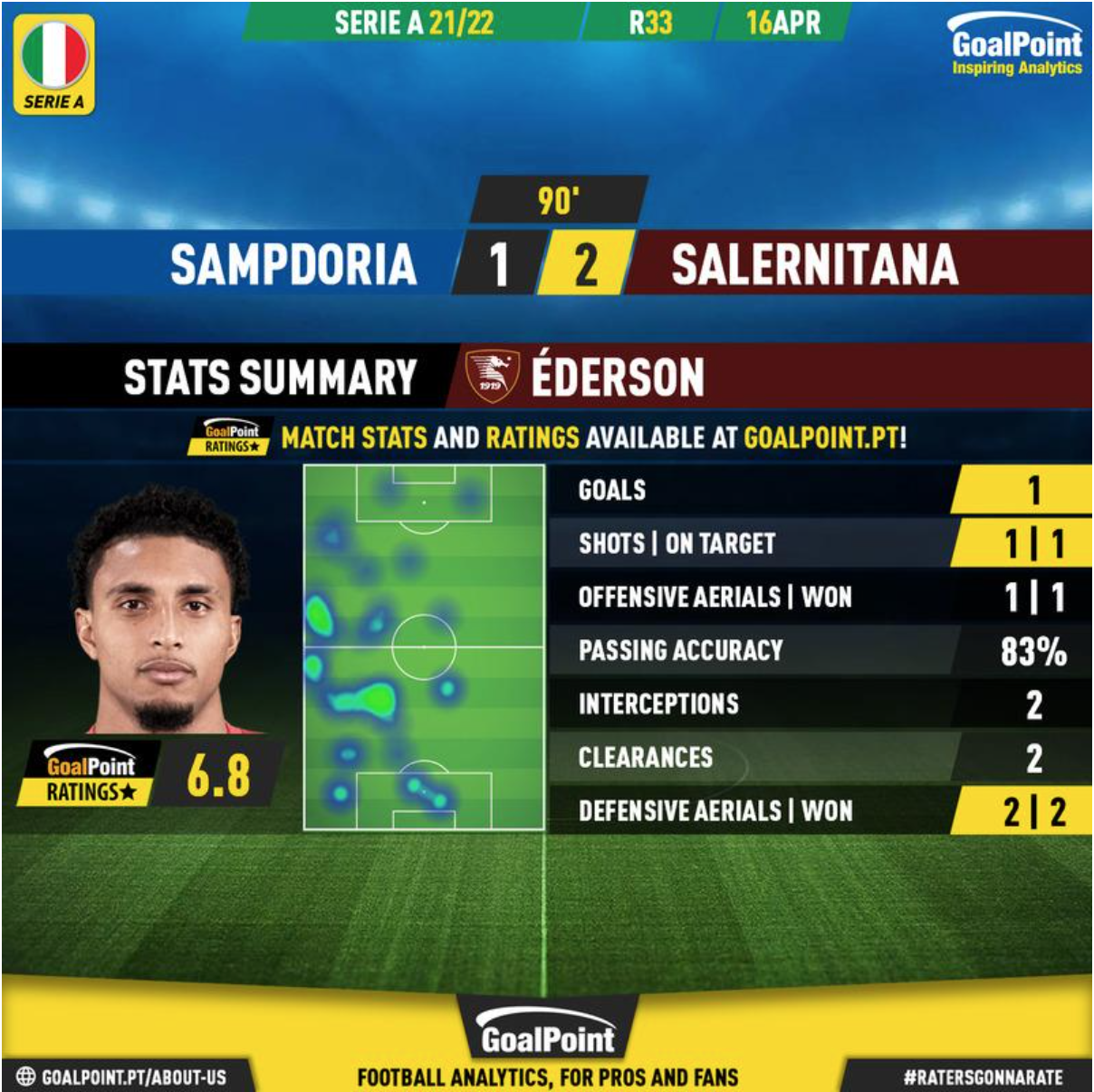 One of Éderson’s most decisive performances for Salernitana was in the Campanian club’s 2-1 victory away to Sampdoria in Week 33 of Serie A action. It was the start of a purple patch for the southern Italians, who won four out of five games which included two catch-up games.

The Granata need just two goals in the opening six minutes to secure the win in Genoa whereas Francesco Caputo’s goal for the Blucerchiati was nothing more than a consolation strike.

Federico Fazio opened the scoring for Salernitana with a header after four minutes, but Éderson doubled his team’s lead two minutes later when he ran into the opposition half, Milan Djurić headed the ball down into the Brazilian’s path, and the midfielder dribbled into the penalty area before putting the ball in between the legs of Sampdoria goalkeeper Emil Audero.

Éderson scored with his only shot of the game and he won his only offensive aerial duel for the match while also completing a passing accuracy of 83 percent. Although his most impressive contribution was an offensive one, he also impressed defensively in this match. He won both of his defensive aerial duels, made two interceptions, and he also made two clearances.

The heat map for this particular match shows that he was in certain areas sporadically and did not run up and down the pitch. The two areas where he was present the most were in the defensive midfield position and the left side of midfield. This is perhaps a reflection of Davide Nicola’s tactics and the team has to hold its shape as opposed to players interchanging positions. 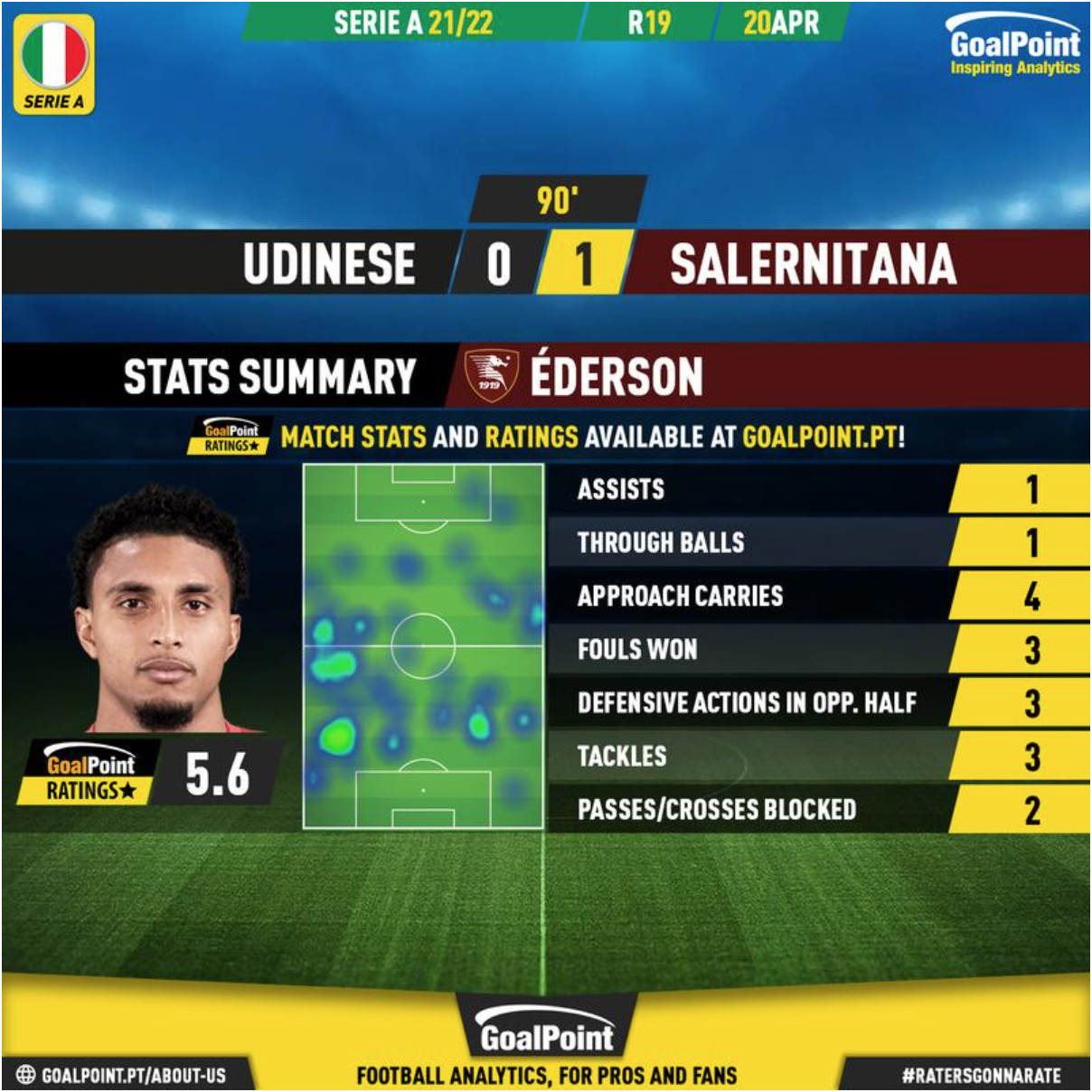 Four days after its win away to Sampdoria, Salernitana travelled to Udine to face Udinese in a rescheduled Serie A fixture. In a tight fixture, Simone Verdi scored the only goal of the match in injury time after running onto a delightful through-ball from Éderson.

According to the heat map from GoalPoint, the Brazilian did not cover a lot of ground, but he was spotted in various different spots across the pitch. For most of the game, he was pegged back in his own half and his presence was most noticeable in the left-back and left midfield positions.

Although Éderson might not have been very active in the game, he still ranked first in many categories. In addition to his assist for Verdi, the 23-year-old made four approach carries and he was fouled three times. Defensively, he made three defensive actions in the opposition half, three tackles, and two blocks.

The three defensive actions in the opposition half show that even if he was in his own half for most of the game against Udinese, he was capable of making an impact when he had the opportunity to cross the halfway line. 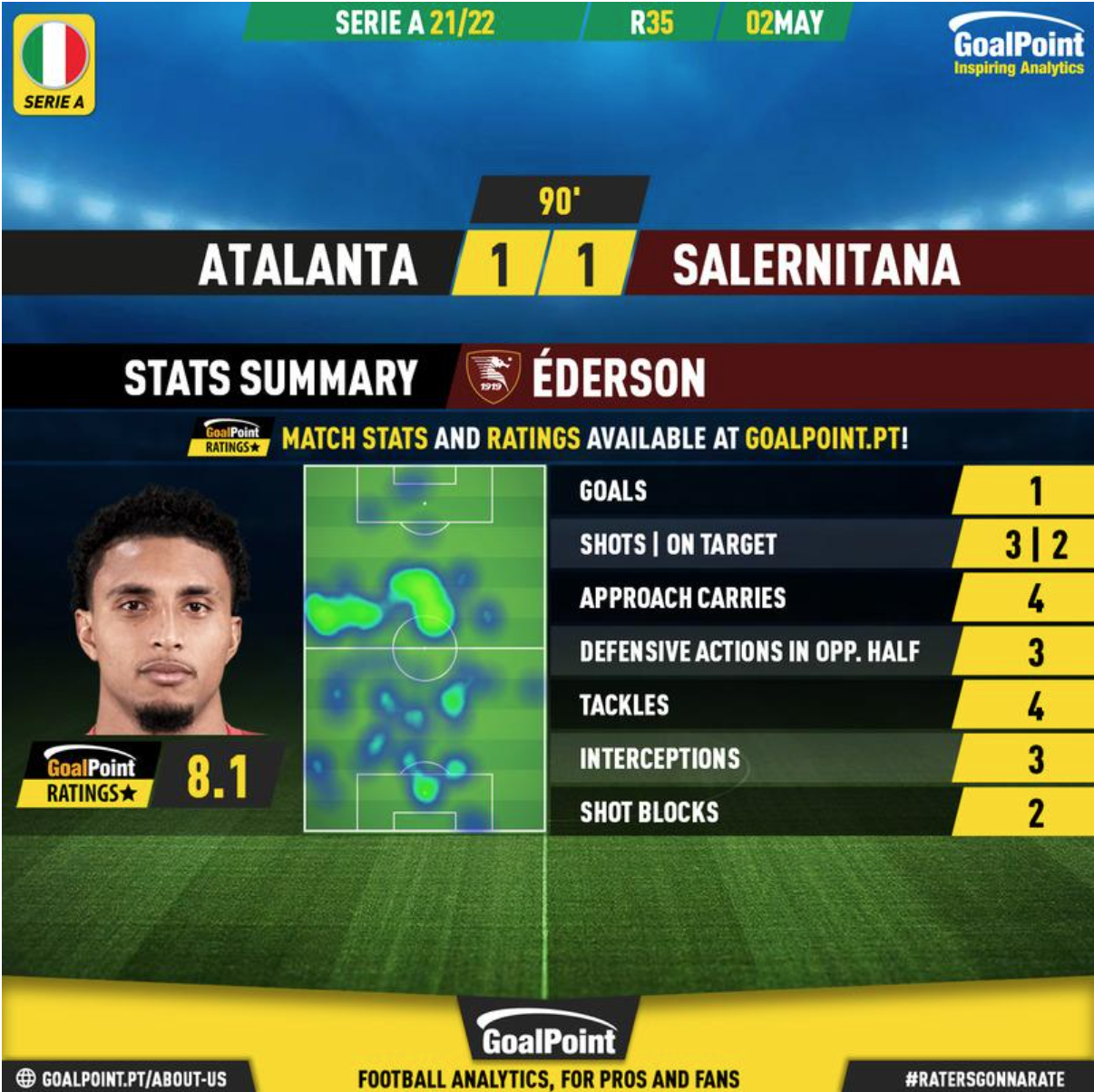 Arguably the best performance from Éderson during his time with Salernitana was in the Granata’s 1-1 draw away to Atalanta. It was a match in which he contributed to the team in both the defensive and offensive phases, and he scored the opening goal of the game after Djurić knocked the ball down in the box and the Brazilian slid the ball into the net.

The heat map indicates that he would appear in different sections of his own half, some times in his own area. However, most of his presence was in the opposition half, mostly in the central channel and around the left flank. Even again an attack-minded team like Atalanta, he was still able to make impact for his own team offensively.

In addition to the goal, Éderson ranked first in many categories. He took three shots with two on target, made four approach carries, three defensive actions in the opposition half, four tackles, three interceptions, and blocked two shots.

What Can Marseille Fans Expect from New Manager Igor Tudor?

This performance was probably decisive in Atalanta eventually signing the Brazilian from Salernitana. Not only was he capable of thwarting the attacks of La Dea, but he was also able to help his team transition from defense to attack, and he got into goalscoring positions.

Éderson has had a rapid rise since leaving his native Brazil for Italy. He was instrumental in helping Salernitana avoid the drop for the first time in its history and now he will be playing for a club that until 2021/22 had been qualifying for European competitions for the previous five seasons.

The 2022/23 campaign will be his first full season in Europe but he demonstrated in his short spell with Salernitana that he is capable of succeeding in one of Europe’s major leagues. His transfer to Atalanta will present a new challenge for the 23-year-old and adapting to the methods of La Dea coach Gian Piero Gasperini will be the key to how well he settles in Bergamo.