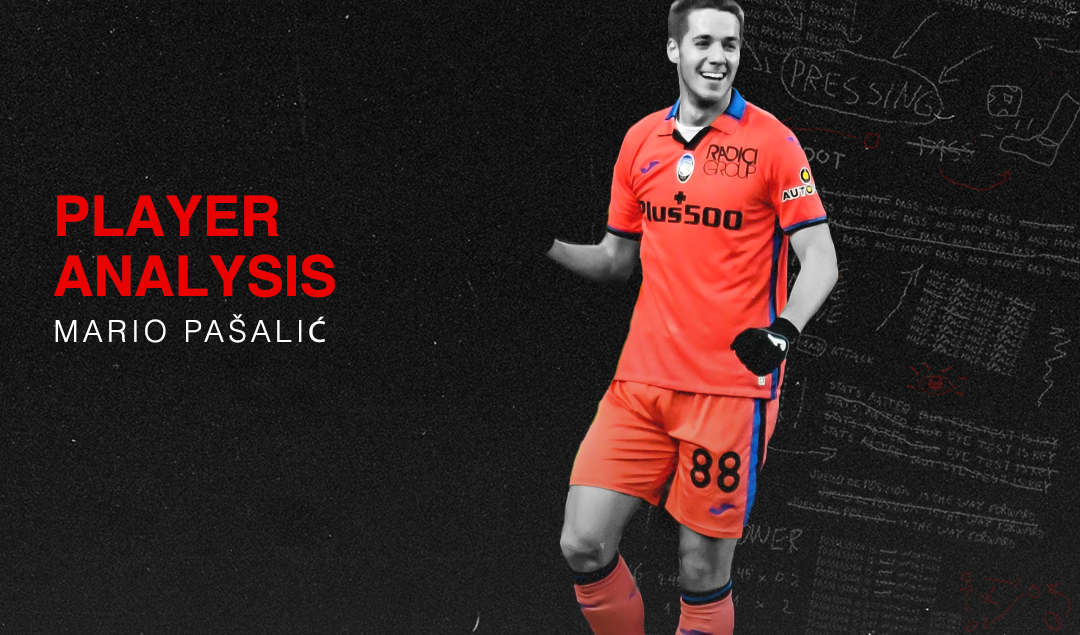 Throughout the Roman Abramovich era, Chelsea has produced plenty of young talent through its youth system and also purchased talented youngsters from other parts of the world. Due to the abundance of established players in the Blues squad over the years, young players often find it difficult to break into the starting line-up.

Mario Pašalić was one of those youngsters. He was acquired from Croatian giants Hajduk Split and then Chelsea sent him out to different clubs on various loan deals. However, that all changed when he arrived at Italian club Atalanta and found a coach as well as a team that could bring the best out of his abilities.

Pašalić has played for La Dea since 2018 and he has matured as a player since his arrival in Bergamo. Under the tutelage of Coach Gian Piero Gasperini, the Croatia international has perfected his ability to time his runs into the penalty area and get into scoring positions.

The 26-year-old displayed some of that ability when he was playing for Hajduk in the early 2010s. After coming through the youth academy of the Bili (the Whites), he played two matches in the 2012/13 Prva HNL campaign, and then he played in 37 competitive matches in the following season.

Although he had no direct involvement in the goals in the Croatian Cup and the Europa League qualifiers, Pašalić made his impact in the Croatian league, scoring 11 goals and providing five assists.

He had scored both goals in a victory against domestic rivals Dinamo Zagreb in September 2013, displaying his ability to ghost around the back post to score goals.

After that impressive campaign with Hajduk, Chelsea decided to purchase Pašalić for a reported figure of €2.5 million in July 2014, but the Blues decided to send him on loan to Spanish club Elche for the 2014/15 season.

The Croatian midfielder played in 35 competitive matches and scored three goals – all three were in La Liga – as Elche went on to finish 13th in the Spanish league. However, Los Franjiverdes were demoted from La Liga by the LFP due to unpaid taxes.

Chelsea decided to send him on loan again for the 2015/16 season, this time to Ligue 1 side AS Monaco. Pašalić was sent to the principality club as part of an exchange for Colombian striker Radamel Falcao to join the Blues.

Falcao had a season to forget, scoring just once in 10 Premier League appearances. Meanwhile, Pašalić made 29 competitive appearances and scored seven goals. He played only 16 matches in Ligue 1, scoring three times, but he featured in nine games across two European competitions, finding the back of the net twice.

For the 2016/17 campaign, Chelsea decided to send him on loan to Italian giant AC Milan.  Pašalić had been linked with a move to Italy when he was still at Hajduk Split, and the club had accepted a bid from Catania for €1.5 million, but he was eager to remain in Croatia.

He had to wait until Week 11 of the 2016/17 Serie A season to make his league debut in Italy, but he went on to play 24 times in Serie A and scored five times.

The seemingly ever-going sequence of loans for Pašalić continued in 2017/18 and this time he joined Russian giant Spartak Moscow. He scored five goals in 32 competitive games, which included four goals in 21 Russian league matches. A season later though, the Croatian would go on a loan deal that changed his career for the better.

Atalanta was developing a reputation for being an exciting team to watch under Coach Gian Piero Gasperini and it was starting to earn regular qualification for Europe. La Dea had sold Bryan Cristante to Roma and they needed to find another midfielder who could make late runs into the penalty area.

Pašalić was identified as a player who could perform that role and Atalanta paid €2.5 million to sign him on loan from Chelsea.

The club from Bergamo achieved qualification for the UEFA Champions League for the first time in history, finishing third at the end of the 2018/19 Serie A campaign. Pašalić featured regularly for Atalanta, playing 33 league matches, scoring five times, and providing three assists.

He also played five times in the Coppa Italia, scoring twice, but he only played for five minutes in La Dea’s 2-0 defeat to Lazio in the final.

Atalanta decided to extend his loan deal for another season and Pašalić built upon his performances from the previous campaign. In Serie A, he played in 35 matches, scored nine goals, and supplied five assists.

Five of his goals in the 2019/20 Serie A campaign came against local rivals Brescia. He scored twice in the 3-0 victory in Brescia, and then he had the game of his life in the return fixture, scoring a hat-trick in an emphatic 6-2 victory in Bergamo.

He also made an impact in the humiliation of his former club AC Milan, scoring one goal and also assisting for Josip Iličić in a 5-0 victory.

Atalanta had a tough start in the Champions League, losing its first three matches, but a draw and two victories in the remaining Group C games secured its passage to the Round of 16.

Pašalić had scored the equalizer in the 1-1 draw against Manchester City and he also scored the second goal in La Dea’s 3-0 win against Shakhtar Donetsk. An 8-4 on aggregate triumph against Valencia earned the Bergamaschi a quarter-final place against Paris Saint-Germain.

Pašalić had given the Italian side the lead after 26 minutes, and they were close to reaching the semi-finals, but for a dramatic collapse. Fatigue and injuries took a toll on the Serie A side and two late goals from Les Parisiens were enough to eliminate Atalanta in the one-off tie.

After two seasons in Bergamo, the Croatian was purchased from Chelsea in September 2020 for €14.5 million.

He did not make a single competitive appearance for the West London club but it still made a sizable profit from his sale. Pašalić, on the other hand, did not have to worry about his future and La Dea saw that he had become an important player for them.

A hernia injury limited the Croatian to 25 Serie A appearances in 2020/21 but this did not deter Croatia coach Zlatko Dalić from selecting him for Euro 2020. Pašalić had been born in Mainz, Germany, but his parents moved back to Croatia when he was a boy and he had represented the Croatians in various youth teams.

He had been capped as far back as 2014 for the senior squad, but he was capped sparingly. Although he made the preliminary squads for the 2014 and 2018 World Cups, he failed to make the final squad for both tournaments. It also doesn’t help when you are fighting for a spot in a team that boasts incredible depth in midfield.

Pašalić has gone on to score six goals in 34 matches for the Vatreni so far, including one goal in two appearances at Euro 2020. He almost became a hero for his country, scoring an equalizer against Spain in the Round of 16.

The Croatians were 3-2 down but the Atalanta midfielder made one of his characteristically late runs into the box to head the ball into the net and make it 3-3 in stoppage time. Although Pašalić forced the game into extra-time, the Spaniards eventually ended up 5-3 winners in a classic encounter.

At club level, the Croatian is having one of his best seasons ever. In 21 Serie A appearances throughout 2021/22, he has scored eight goals and supplied seven assists. He performed admirably in the 4-1 victory against Empoli supplying three assists, and then he got his second hat-trick in Serie A in a 4-0 win against Venezia.

In previous seasons, Pašalić would play either behind the strikers or in central midfield alongside either Marten De Roon or Remo Freuler. This season, Gasperini had used the Croatian in central midfield in the opening rounds, but he has played as an attacking midfielder after the Week 8 win against Empoli.

Mario Pašalić has had a slow rise to the top in his career. Despite being bought by Chelsea at a young age, he was not given a chance by numerous Blues managers. After being sent around Europe several times, arriving in Bergamo has given the Croatian midfielder a sense of purpose.

Finding his feet with Atalanta has enabled him to break into the Croatia squad and he has become much better for it.