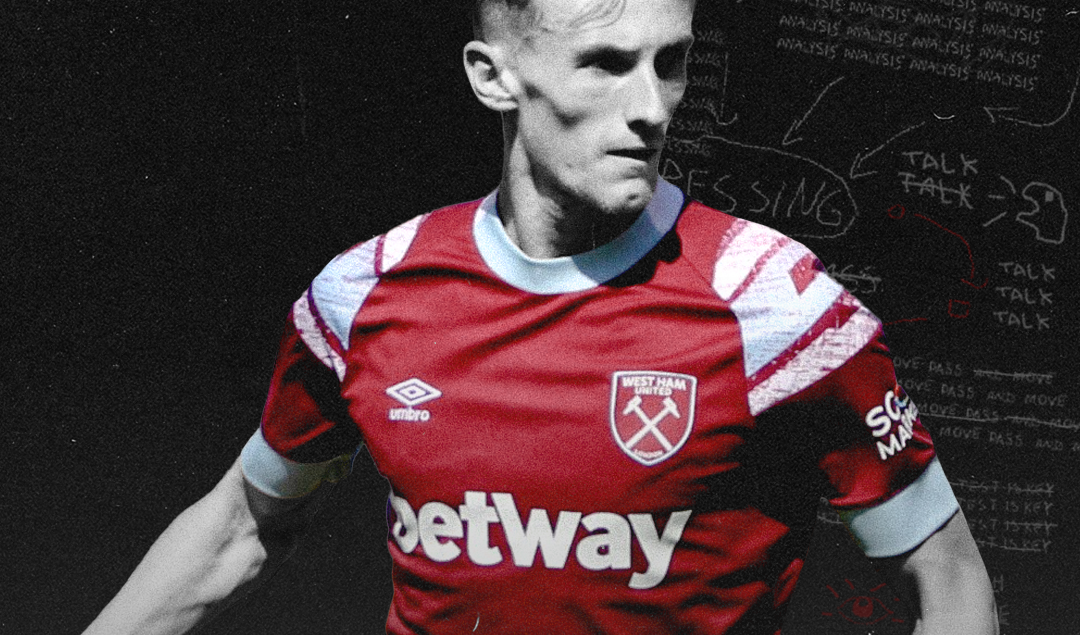 Flynn Downes’ first interview after signing for David Moyes’ Hammers saw the ex-Swansea midfielder beaming with pride, putting pen to paper on a big move to the Premier League and signing for the club he’s supported since a child. He spoke of the surreal nature of the transfer, joining West Ham only a few years on from playing in League One with Ipswich.

He won’t have made this move however to simply coast by and watch on from side-lines, he will compete for a spot in the line-up and give healthy competition to the likes of Tomas Soucek and Declan Rice in that holding midfielder role.

Excelling under Russell Martin last season at Swansea – Downes integral to the style of football Martin insists on with the 23-year-old orchestrating various passing moves from deep – he will hope he can develop into a key piece of the West Ham jigsaw in the years to come.

Russell Martin :  Standing By His Principles at Swansea

With Jarrod Bowen now a fully-fledged England international since leaving the EFL behind for The London Stadium, Downes will hope he can have a similar career path to the former Hull City attacker.

Flynn Downes would break through at Ipswich Town, the 23-year-old midfielder joining the Tractor Boys as a seven-year-old. He would stay with Ipswich throughout his childhood, his time at Portman Road leaving a lasting imprint to this day.

He would eventually sign a one-year professional contract at Ipswich on the eve of the 2017-18 season, impressing the then Ipswich Town manager Mick McCarthy so much however that this one-year contract was then bumped up to a three-year deal.

It was a whirlwind rise that culminated in Downes becoming a first-team stalwart for Town by the time of his departure to Swansea in 2021, even becoming Ipswich’s youngest ever captain at just 20 years of age along the way.

He would amass over 90 appearances for The Tractor Boys, only leaving the club at the time after falling out of favour with the Ipswich manager Paul Cook. He was ready for the step-up in quality, his career in danger of stagnating with Ipswich failing to get promoted back up to the Championship.

The 2019-20 season saw Flynn Downes shine in an otherwise bumpy season for those involved with Ipswich, the same characteristics that impressed West Ham were on show throughout this breakthrough season for the young midfielder.

He was constantly energetic and bright on the ball, an additional bit of bite also saw his aggression become a key trait to his game – always closing down opposition players quickly, winning the ball back for his side with intuitive thinking.

Downes even managed to add goals to his game, two headers to be precise with the 5ft 8 midfielder putting his body on the line to score. He would routinely assert his dominance in the centre of the park for Ipswich, committing himself into slide tackles and battling expertly throughout his time for the Tractor Boys.

It would result in Swansea swooping in for his services after the end of Downes’ career in Suffolk turned sour, the Brentwood-born midfielder pushing for a move long before he joined the Swans. Still, Downes would have learnt so much from his formative years at Ipswich that has then contributed to the player he is today at West Ham.

Swansea also saw Downes improve as a footballer, the step-up in quality to Championship football almost seamless for the former Ipswich Town youngster.

He was the heartbeat of the Swansea side last season, orchestrating moves from the centre of the park with midfield partner Matt Grimes whilst still harnessing that raw edge that saw him excel in League One – that added aggression made him a well-rounded footballer, Russell Martin’s philosophies as a manager allowed Downes to focus on his passing game more.

Some could say his weak discipline and rash tackling could be perceived as a weakness, but it certainly benefitted a Swansea side last season who needed a rough edge to their pass-heavy game.

His rise to becoming a key player at Ipswich was gradual, his status as a key midfielder in the Swansea camp was almost immediate – he was even entrusted with the captain’s armband for an FA Cup clash against Southampton, citing it as a ‘massive honour’ so soon into his stay on the South Coast of Wales.

Downes’ attacking qualities even as a deep midfield option shone too, his one solitary goal for Russell Martin’s side epitomising Swansea’s free-flowing attacking game and intricate focus on keeping possession – Downes applying a deft finish to a wonderful move away at Huddersfield, his strike trickling into the corner late on to secure a draw for the Swans.

He would also manage two assists during his one-season stay at Swansea, his assist for Hannes Wolf’s screamer in a breakneck 4-4 draw versus Reading sticks out.

It shows off Downes’ energy and burst of pace, brushing off any attempts to thwart his progress forward from multiple Reading shirts before finding Wolf who effortlessly strokes an effort into the top corner.

Even though Swansea had an up and down season – a transitional campaign after the exit of Steve Cooper – Russell Martin’s men thoroughly entertained supporters with their brand of easy-on-the-eye football.

His second assist in Swansea colours would come in a brilliant 3-1 home win over Coventry, picking up the ball in a pocket of space before driving forward and unleashing the run of Michael Obafemi to prod home.

If Swansea were more consistent over the 46-game slog of the full Championship season, they might have stood an outside chance of making the playoffs. Alas, a lower mid-table finish was the actual reality – finishing 15th in the table overall, an average season littered with some memorable moments.

Downes was a pivotal glue in the centre of the park by the end of that campaign, the 23-year-old completing 92.6% of his passes last season in a Swansea shirt. As a result, he had the highest pass-completion rate in England’s top four divisions for the 2021/22 campaign. Just behind him was new teammate Declan Rice with 91.6%.

Swansea would have been obviously gutted to see Downes exit after a short stint in Wales, but they couldn’t stand in his way – especially with the fact his boyhood club wanted his services, a dream move for the central midfielder. Swansea have replaced Downes with the likes of Joe Allen, but a gaping hole will be left by Downes’ departure to the Hammers.

Leaving The Swans for a reported 12 million, he will offer healthy competition next season to the aforementioned Declan Rice. The pressure will be off for the season ahead you imagine for Downes, the Ipswich Town youth prospect turned Hammers midfielder still basking in the surreal nature of this big money move.

David Moyes will give him moments to shine next season though, a boss who already utilises past EFL talent in his starting elevens with Jarrod Bowen an obvious example alongside previous Ipswich full-back Aaron Cresswell who is now an experienced Premier League player and long-standing servant to West Ham.

Flynn Downes will want to impress and show off his true ability at the club he loves, but for now, he needs to savour the feeling of joining the club he’s supported since a boy before the Premier League rolls around.