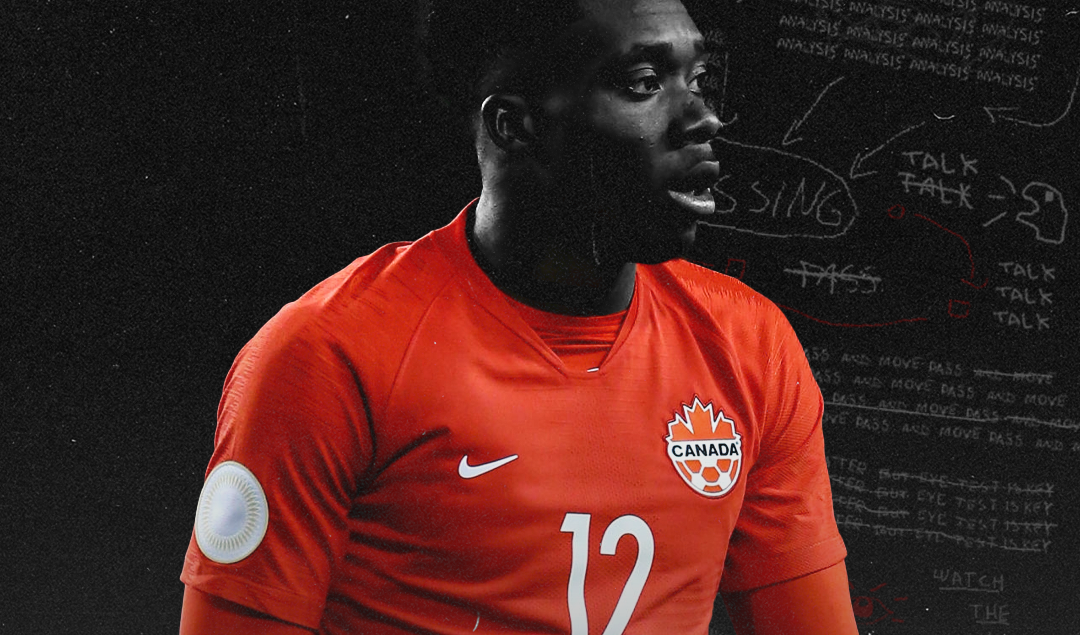 The year is 1999, the month is April. TLC’s “No Scrubs” is blasting through the boomboxes, Sir Alex Ferguson’s Manchester United is marching towards a historic European treble, and the world is preparing to usher in a new century.

Taylor had assumed power two years prior after the end of the First Liberian Civil War, which spanned nearly eight years and waged senseless violence that killed between 400,000 and 620,000 Liberians. From that moment on, a bloody four-year war ensued, one that condemned 38,000 child soldiers to a life of government-mandated drug addiction, prostitution, and senseless killing.

To escape another hellish bloodbath, nearly one million Liberians sought refuge as asylum seekers. Two of those people were Debeah and Victoria Davies, who traveled hundreds of miles across West Africa, sometimes having to cross over dead bodies to find food until they reached Buduburam, a refugee camp in southern Ghana. It was there where their son Alphonso was born, and he would spend the first five years of his life in that camp.

As a violent civil war raged on eastward in their homeland, Debeah and Victoria often struggled to find food and clothing for their son, and as a result, Alphonso’s health took a toll.  “Refugee life was like being put in a container and being locked up,” said Victoria. “There was no way to get out.”

Desperate for a safe haven, the family applied and were subsequently accepted to Canada’s resettlement program, moving to Windsor, Ontario in 2006, before settling in Edmonton. In Canada, Davies discovered his passion for the beautiful game, and blossomed into one of the finest teenage prospects in European football.

In order to make ends meet for their three children, Victoria and Debeah worked long hours as a university janitor and a factory worker at a poultry processing plant, respectively. This forced Alphonso to help raise his younger siblings all the while attending Mother Theresa Catholic school.

“At 10 years old, Alphonso was baby-sitting his brother and sister…he had to mature really quickly,” said Davies’s youth coach Nick Huouseh. “He was making their food for them…most 10-year-olds were playing video games, Alphonso was changing diapers.”

It was there where he began to play football, and his talent was quickly noticed by his sports coach Melissa Guzzo. Guzzo reached out to Tim Adams, the founder of Free Footie, a nearby after-school league for inner-city kids who could neither afford registration fees nor equipment nor transportation to games.

Blown away by his ability and potential, Adams gave a ring to Marco Bossio, the head coach of the St. Nicholas Soccer Academy, to check out his young prodigy. In an interview with Bundesliga, Bossio recalls, “There was something special about this boy,” Bossio said. “He had lightning-quick feet and speed with the ball. I knew that was something special at that age.”

Davies played his first minutes of organized football under Bossio’s command, and in order to bulk up for the next level, he spent every day in St. Nicholas’s weight room, working on his leg and core strength. He later joined the Edmonton Strikers, before going on trial at the Vancouver Whitecaps’s academy.

After being accepted into the club’s residency program as a 14-year-old, he rocketed up the youth ranks, becoming the first player born in the 2000s to play in MLS. Nothing could stop his rapid ascent to the top, and it wasn’t too long before Davies was playing for Canada’s youth teams, despite still being a Liberia national.

At the age of 16, Davies, who had already carved out a starting spot under Whitecaps manager Carl Robinson, received Canadian citizenship. A week later, he made his debut for Canada’s national team, coming on as a substitute in a friendly match against Curaçao.

Then Canada manager Octavio Zambrano started him in Canada’s first Gold Cup match, and the teenager rewarded his trust, scoring a brace against French Guyana and becoming the youngest goalscorer in Les Rouges’s 93-year history.

He started the next match, scoring the opener against Costa Rica, before being shut out by Honduras and Jamaica. The Canucks exited the tournament disappointingly early, but Davies’s red-hot talent brought promise of better days for Canada fans.

Davies wasn’t just younger than the rest, but better too. His dynamic mixture of slick ball control, blistering pace, and strength was too much for opposition defenders to handle. With Davies wreaking havoc on the left flank, Vancouver advanced to the MLS Cup Conference Semifinals and the CONCACAF Champions League semifinals.

Such were his performances that Bayern Munich decided to shell out $13 million for him, rising to $22 million with performance objectives, which would be the highest transfer fee in MLS history. The contract add-ons bequeathed Vancouver with a 15% sell-on clause, but if his performances are anything to go by, it’ll be a long time before Bayern decide to sell him.

There were speedbumps on and off the pitch, like when Davies was fined €20,000 by ex manager Niko Kovač in September for being late to training. Davies had jetted off to Paris to see his girlfriend and PSG forward Jordan Huitema, who at 18, has emerged into one of Canada’s most exciting women’s football prospects. However, due to a passenger going through a close emergency exit door and paralyzing the terminal, the flight to Säbener Strasse was delayed for four hours, and Davies paid the price.

It was rough luck, but nothing compared to the grueling circumstances he faced while growing up. As is customary for a young player coming from another continent, Davies found playing time hard to come by in his first few months in Europe. However, his fortunes changed overnight on October 22, in a Champions League match against Olympiakos.

Lucas Hernandez, who arrived from Atlético Madrid the prior summer for a club-record fee, tore his ankle ligaments, condemning himself to 15 weeks on the injury table. The next game, new manager Hans-Dieter Flick started Davies at left back, a position that he sometimes played in Vancouver.

Necessity is the mother of invention, and with both of Bayern’s first-choice center backs — Niklas Süle and Hernandez — succumbing to long-term injuries, Flick was forced to invent a new system to cope with his head-scratching dilemma.

Flick took Davies, who caught the eye of Bayern’s scouts as a rapid, incisive winger, and utilized him as a left back, while moving David Alaba from the left side of defense to the center, where he played under Pep Guardiola. The result? Alaba enjoyed a resurgence in form, excelling in central defense alongside Jérôme Boateng, whilst Davies quickly evolved into one of the finest young talents in Europe.

Having started just three matches under Kovač, Davies became a guaranteed starter under Flick, rising to the occasion amid an injury crisis and excelling at left back. Bayern ended the 2019/20 season with a 30-match unbeaten run and a 21-match winning streak, a brilliant run of form that can be attributed to not only Flick’s appointment, but Davies’ emergence.

Nine months after a 5-1 loss to Eintracht Frankfurt saw Kovač sacked, and eight months after back-to-back losses to Bayer Leverkusen and Borussia Mönchengladbach left Bayern seventh in the league, Bayern had not only won an eighth straight Bundesliga title and the DFB-Pokal, but won the treble for the second time in their history, defeating Paris Saint-Germain in the UEFA Champions League Final in Lisbon.

The Canadian’s combination of speed, physicality, and stamina allows him to chase down counterattacks and regain possession, but it also provides him the ability to bully opposing fullbacks with his quick feet, powerful shot, and devastating change of pace. Having arrived in Germany as a winger, he has developed into one of the deadliest fullbacks in the world at Bayern Munich.

Despite missing a month with a torn ankle ligament, Davies continued his impressive performances for the Bavarian side in 2020/21, registering 35 apperances as Bayern steamrolled the competition en route to another league title. However, with Flick leaving to take on the Germany job at the end of the season, there were concerns that Davies’ importance would subside under new manager Julian Nagelsmann.

Instead, Davies has merely gone up another level for Bayern, who sit nine points clear of second-placed Borussia Dortmund at the closure of the Hinrunde, and who topped their Champions League group of Benfica, Barcelona and Dynamo Kyiv, taking 18 points from their six games, scoring 22 goals and conceding three.

Davies also places 19th in the Bundesliga for big chances created (6) and second in the UEFA Champions League for successful dribbles per game with 4.0, completing 83% — the first-placed dribbler, Nicolas Moumie Ngamaleu of Young Boys, completes 5.3 per game with an accuracy rate of 59%.

Whilst he has excelled at left back for Bayern, Davies has mainly played in an attacking role for the Canadian national team, racking up an astonishing 10 goals and 16 assists in 30 appearances for John Herdman’s side. After defeating Mexico in Davies’ hometown of Edmonton on November 16, the Canucks sit atop the CONCACAF World Cup Qualifying table with 16 points from 8 games.

Six qualifiers remain, with daunting trips to Honduras, El Salvador, Costa Rica and Panama as well as home matches against the United States and Jamaica on the horizon, but Canada are on track to qualify for their first FIFA World Cup since 1986 and second overall. Their ’86 campaign saw them finish bottom of their group with zero goals scored and five goals conceded.

It’s still not clear what position Davies will seek to nail down in the long term, but one thing’s for certain; he is going to play a leading role for both club and country for years to come. More than just becoming a leader on the pitch, Davies is leading off of it too.

Inspired by his success story, over 4,000 children are now enrolled in Free Footie, a sharp increase from 650 in 2013. He has shined the spotlight on the non-profit organization, and as a result, thousands of low-income, underprivileged Canadian children are getting valuable football training.

What’s more, Free Footie has added basketball, street hockey, American football and rugby, so if football isn’t their cup of tea, these kids can try something else.

Free Footie provides low-income children, many of them refugees like Alphonso once was, with equipment and free busing to and from practices and games. If you want to support the organization, you can do so by donating here.

When the United States, Canada, and Mexico launched their joint bid to host the 2026 FIFA World Cup, Davies was chosen as one of the three guest speakers at the FIFA headquarters, along with Diego Lainez and Brianna Pinto.

The then 17-year-old gave a heartfelt, moving speech before the selection committee, saying, “When I was 5 years old, a country called Canada welcomed us in, and the boys on the football team made me feel at home. My dream is to someday compete in the World Cup, maybe even in my hometown of Edmonton.”

Edmonton will be one of the host cities for the 2026 World Cup, in which Davies will be 25 years old. Alongside the likes of Jonathan David, Stephen Eustáquio and Cyle Larin, he’ll be entering his prime at that time, as Canada prepare to play in their first World Cup in forty years — that is, unless Canada qualify for next year’s World Cup in Qatar.

It’ll be tough, but for Alphonso Davies, adversity is just another word.