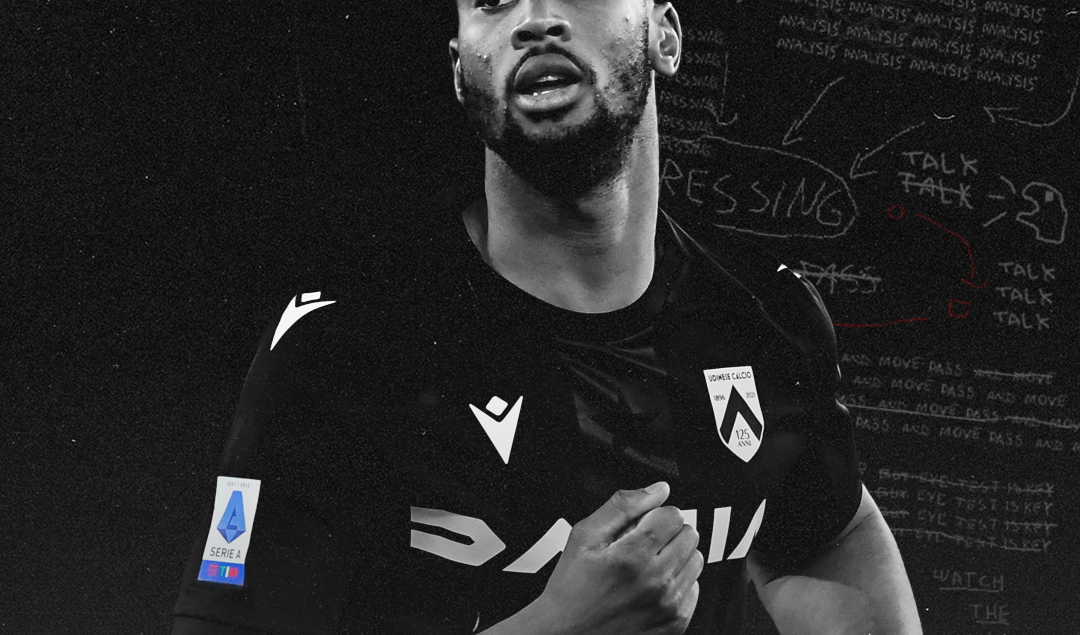 Udinese has not produced much excitement in recent years as a team but the club from the Friuli-Venezia Giulia region in north-eastern Italy is still discovering its share of hidden footballing gems.

The Zebrette sold Argentines Juan Musso and Rodrigo De Paul to Serie A rivals Atalanta and Spanish giants Atletico Madrid respectively, continuing once again to sell their best players for a significant profit.

Up front, Udinese has given a platform for a little-known Portuguese forward to display his talents in the first half of the 2021/22 season. Norberto Bercique Gomes Betuncal, better known as Beto, has scored seven goals in 16 Serie A games and his goals have been crucial in his team’s battle to avoid relegation to Serie B.

Standing at 1.94 m tall, the 23-year-old of Bissau-Guinean origins is a well-built striker. He is physically strong and can dominate in the air, but he has also displayed comfort with the ball at his feet and can make rapid surges towards goal.

Beto was acquired by Udinese in August 2021 from Primeira Liga side Portimonense on a season-long loan deal with an obligation to be bought outright.

With veteran striker Stefano Okaka joining Turkish club İstanbul Başakşehir days after the Portuguese forward’s arrival, it presented Beto with a greater opportunity to prove himself with the Zebrette.

Like many players that have joined Udinese over the years, Beto did not arrive with a great pedigree. He came through the youth system of União de Tires and made a number of appearances with the senior squad before joining Clube Olímpico do Montijo for the 2018/19 season.

Beto had a prolific campaign with Montijo in the Campeonato de Portugal – the Portuguese third tier at the time – scoring 21 goals in 34 matches. His form attracted the interest of Portimonense, where he played for two seasons. It was in his second season where he discovered his form, scoring 11 goals in 30 Liga NOS matches.

When he arrived at Udinese, he was limited to appearances off the bench as Coach Luca Gotti preferred two fast and diminutive forwards instead of having one tall forward and a shorter option beside him.

Beto came off the bench for his Serie A debut, a 1-0 victory against Spezia in Week 3, and he would make appearances off the bench in the following two matches, which both ended in defeats for the Friulani. Gotti decided to bench Ignacio Pussetto for the Week 6 encounter against Fiorentina and started the Portuguese forward in place of the Argentinian winger.

Udinese lost 1-0 to the Viola but Gotti kept faith in the tall Portuguese center-forward. The Zebrette went on to draw the next four games and Beto scored in the first three matches in that period.

He scored his first Serie A goal in the 3-3 draw away to Sampdoria in Week 7, with his goal giving the Zebrette a 2-1 lead before half-time. He then scored the equalizing goals in draws against Bologna and Atalanta. Both matches ended 1-1 and he found the back of the net with headers on both occasions.

After failing to score in the next two Serie A games, Beto finally scored in an Udinese victory. The Zebrette had taken an early lead against Sassuolo through Gerard Deulofeu but then they fell behind after Domenico Berardi and Davide Frattesi scored for the Neroverdi.

Frattesi had given Udinese some hope by scoring an own goal, leveling the scores at 2-2 before half-time. Beto squandered a chance to give the Zebrette the lead before the break but he did take his chance six minutes into the second half.

Udinese went on the counter-attack and Pereyra centered the ball for the Portuguese forward to tap the ball into an empty net. Despite nearly 40 minutes to play, Beto’s goal made the difference and Udinese won 3-2.

Afterwards, he went another two matches without scoring, but he displayed his finishing touch again in a crazy game against Lazio in Rome. It was the final match played in Week 15 of the 2021/22 season and a Biancocelesti win seemed to be the likely outcome.

Udinese shocked the crowd at the Olimpico by taking a 2-0 lead early in the first half. Lazio coach Maurizio Sarri set his team to control the play while Gotti was happy to let his squad soak up the pressure and then hit on the break.

Beto was the hero of the first half with goals in the 17th and 32nd minutes. His first goal came from a header that had some backspin on it and took a bounce before beating Pepe Reina in the Aquile goal. The second goal was even better.

Isaac Success won the ball in his own half and played a through-ball in between two Lazio defenders for Beto to run onto. The Portuguese forward then sped off and comfortably dribbled around Reina before slotting the ball in from a tight angle.

Udinese was leading 3-1 at half-time, but Lazio came back to lead 4-3, and Torgay Arslan managed to score an equalizer nine minutes into injury time! The Biancocelesti had Patric sent off while Zebrette players Nahuel Molina and Walace were also given their marching orders.

It was a chaotic game but Beto certainly stood out thanks to his brilliance early in the match.

A 3-1 defeat to Empoli saw Gotti sacked as coach of Udinese and Gabriele Cioffi was appointed the caretaker coach. Cioffi earned a 1-1 draw against AC Milan on his Serie A debut and Neto scored his seventh goal of the league campaign.

How Rodrigo De Paul Would Fit Into Leeds

After Tiémoué Bakayoko was dispossessed in midfield, Udinese counter-attacked, and although Mike Maignan saved the first effort, then Fikayo Tomori stopped the second one, the Udinese striker thumped the ball into the net on the third opportunity.

Udinese’s final match for 2021 was a 4-0 victory away to Cagliari yet Beto did not score as Deulofeu took center stage. The Zebrette’s game against Salernitana had to be postponed due to a number of COVID-19 cases, which meant that the calendar year came to an early end.

Cioffi’s side ended the first half of the 2021/22 season in 14th place with Sampdoria on the Serie A table with 20 points albeit with a game in hand. The Zebrette were a rather cautious and dour side to watch under Gotti but they still have been involved in some exciting games.

The creative talents of Deulofeu add some much-needed spark in attack and Beto has proven to be a capable finisher so far in Serie A. If Cioffi can utilize their talents and encourage Udinese to play expansive football, Beto could develop into one of the most lethal strikers in Italian football.