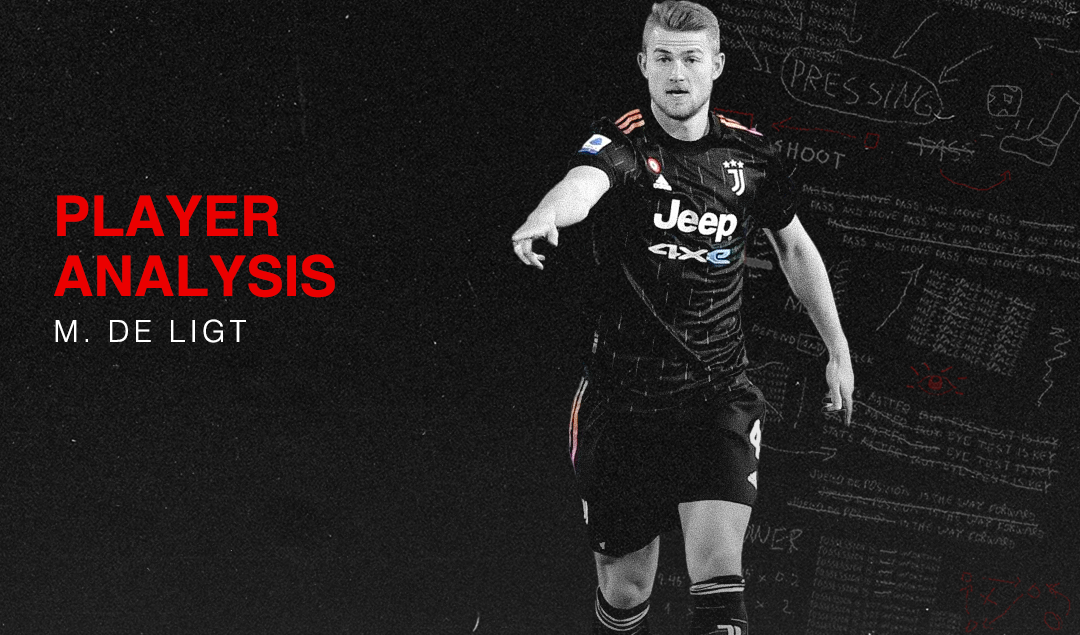 Matthijs De Ligt grabbed the attention of the football world as a young defender who had emerged from the Ajax youth academy and became an integral part of the senior squad.

At the tender age of 19, he led the Amsterdammers to the semi-finals of the Champions League in 2018/19, defeating some illustrious clubs along the way including his current club Juventus.

This prompted the Bianconeri to purchase the Dutch youngster for €75 million in the summer of 2019, and after some initial struggles adapting to Italian football, De Ligt has become an important part of the Juve backline.

It seemed that De Ligt was destined for a great career from a young age. He made his debut for Ajax at the age of 17 in September 2016 in a Dutch Cup first round fixture against Willem II Tilburg.

De Ligt eventually established himself in the senior squad in the second half of the 2016/17 and he was a regular feature in defense as Ajax went on to reach the Europa League Final.

Manchester United defeated the Dutch giants 2-0, but it was a valuable experience for the defender, who at 17 years and 285 days became the youngest player to even play in a European final.

Months before, he did make his debut for The Netherlands in a qualifier for the 2018 World Cup, becoming the youngest player since Mauk Weber in 1931 to play for his country at senior level.

Unfortunately, he was at fault for both goals in the 2-0 defeat to Bulgaria, but the Dutch have kept faith in the defender and his potential.

For the 2017/18 campaign, Ajax coach Erik ten Hag made De Ligt a regular starter in defense, and then he demonstrated his indisputable trust in the young center-back by making him the captain in March 2018 in the absence of first-choice captain Paul Veltman.

The Amsterdammers won 4-1 against Heerenveen in their Eredivisie fixture and De Ligt also scored the opening goal.

The 2018/19 season turned out to be a significant campaign for Ajax and De Ligt in particular. He was awarded the captaincy on a permanent basis, the Amsterdammers went on to win the Dutch league and cup double, and they reached the semi-finals of the Champions League for the first time since the 1996/97 edition.

It was a long campaign for the Dutch side. They had to start in July in the Second Qualifying Round and had to eliminate three teams on the way to the proper tournament. Ajax finished second in Group E to Bayern Munich, who it held to two draws including a dramatic 3-3 draw in the final group game.

Ajax was drawn with Real Madrid in the Round of 16, and the Dutch giants surprised their Spanish counterparts with a 5-3 aggregate victory, which included a 4-1 win in Spain. Italian giants Juventus were next in the quarter-finals, and the Dutch progressed to the semi-finals with a 3-2 aggregate win.

After a 1-1 draw in The Netherlands, the Dutch side went to Turin and outplayed the Italians. Although Cristiano Ronaldo gave the Bianconeri the lead, the Amsterdammers came back with an equalizer from Donny van der Beek and then De Ligt was elevated to hero status with the winning goal.

De Ligt came so close to lead his club to the final as well. Ajax defeated Tottenham Hotspur 1-0 in England and the young center-back had opened the scoring in Amsterdam.

The Dutch giants were 2-0 up at half-time in the second leg but the North Londoners came back in the second half. Spurs scored three times to win 3-2 on the night and progressed to the final on the away goals rule.

Before he went to Juventus, he featured for The Netherlands in the inaugural UEFA Nations League campaign. He scored in the Oranje’s 3-1 victory against England in the semi-finals before they succumbed to a 1-0 defeat to Portugal in the final.

When he arrived in Italy, De Ligt had trouble adapting to the Italian game. The greater emphasis on tactics, especially in the defensive phase, took time for the Dutch starlet to learn and he also had to compete for a place with established defenders like Giorgio Chiellini and Leonardo Bonucci.

Chiellini’s injuries have worked to the advantage of De Ligt, forcing coaches to play him more often. He won the Serie A title in 2019/20 under Maurizio Sarri, but the former Napoli and Chelsea tactician was still sacked at the end of the season.

Since then, De Ligt has been coached by Andrea Pirlo and Massimiliano Allegri. Both coaches have different styles of coaching and incomparable levels of experience but the Dutch youngster still has been able to improve and settle into the team.

With Chiellini and Bonucci suffering more injuries and greater signs of aging, the dependence on De Ligt in defense has become greater as well. 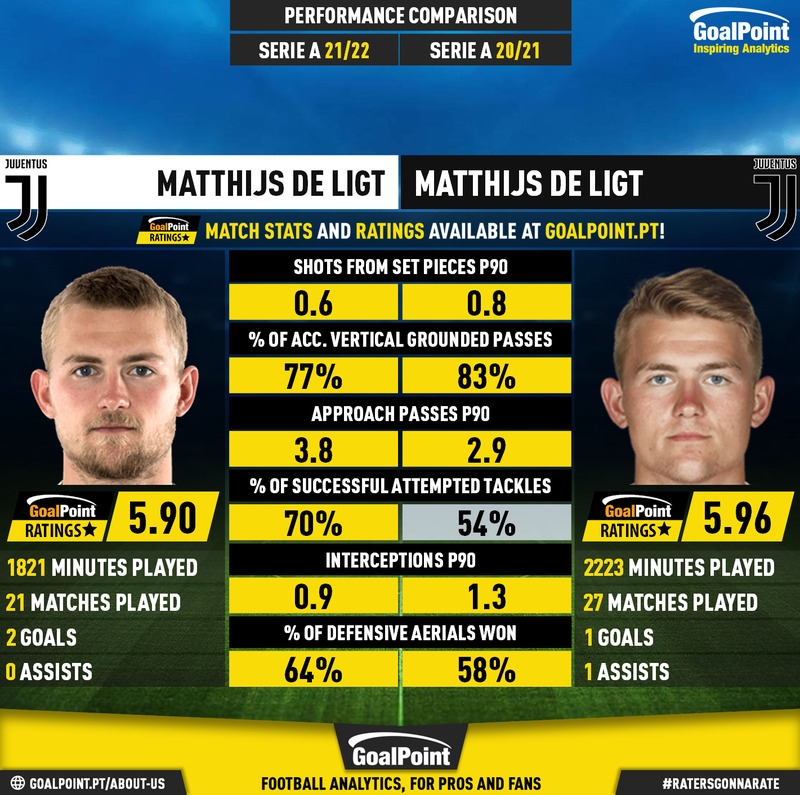 Analyzing De Ligt’s statistics from the 2020/21 and 2021/22 Serie A seasons, some of his numbers looked better in the previous campaign than the current one in progress.

This is possibly because of the change of football philosophies. Juventus was coached by Pirlo in the 2020/21 season and he wanted the Bianconeri to be a proactive team.

The Dutchman would have had more opportunities to do something with the ball, and defensively, he would need to rely on getting in front of his opponent to win the back than to slide on the ground.

Juve has lured back Allegri as coach and he has reverted to the conservative approach that brought him success in his first spell as coach of La Vecchia Signora. This has led to De Ligt improving in some aspects defensively from last season.

Playing under Allegri has made the Dutch starlet become better defensively, but if the improved approach passes per 90 is any indication, the center-back’s ability to play the ball out from the back has become more important, especially when Bonucci is not available. 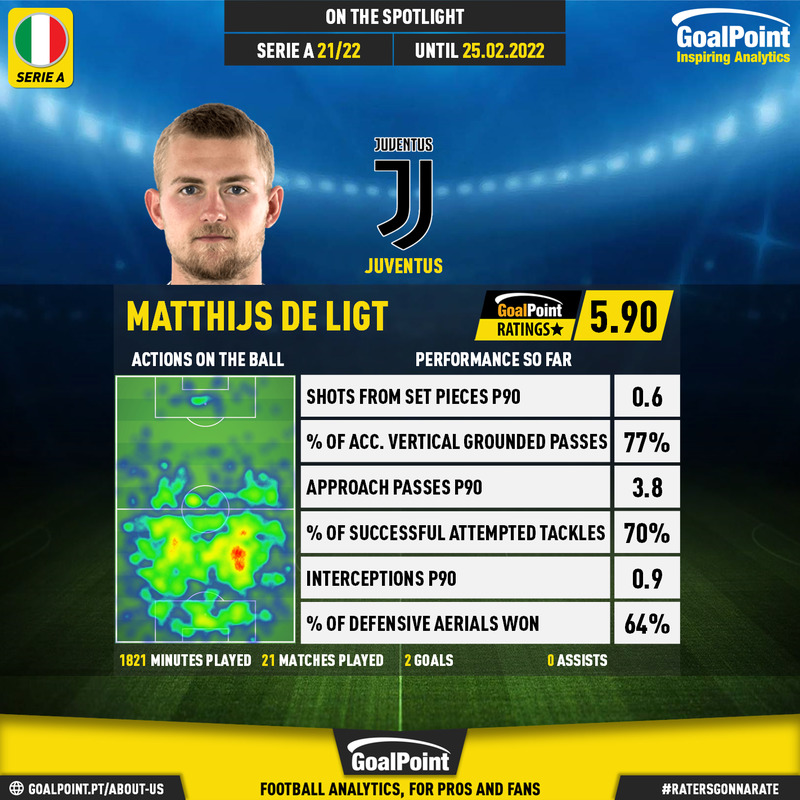 However, the area in which he has been the most present throughout the 2021/22 season so far is in between where the right center-back and the right central midfielder would play.

This is possibly a reflection of his ability to play the ball out from the back and to be in a position to release the ball to one of the midfielders.

It can also indicate that despite the cautious approach of Allegri, the defensive line is not always deep and De Ligt might be involved in making defensive actions further away from the penalty area.

De Ligt will still go into the opposition penalty area for set-pieces, especially for corners. The tall defender is capable of scoring the odd goal, and he has found the back of the net twice in Serie A in 2021/22, including the opener in Juventus’ recent 1-1 draw with Torino in the Derby della Mole.

Despite the continued improvement of De Ligt, his main flaw is handballing. This was more common in the first season or two at Juve, where he struggled to keep his arms close to the main part of his body.

It proved to be costly for his country, when he was sent off at Euro 2020, and the Czech Republic went on to win 2-0 in the Round of 16. If he can eliminate the handballs, he will become more dependable.

Matthijs De Ligt has had an eventual career so far. He has won trophies and been given great responsibilities. Despite some setbacks, he has been able to get back on his feet and shown a willingness to mature.

It is that will to mature and his ability to build upon his natural talent that will make him an undisputed star for club and country.