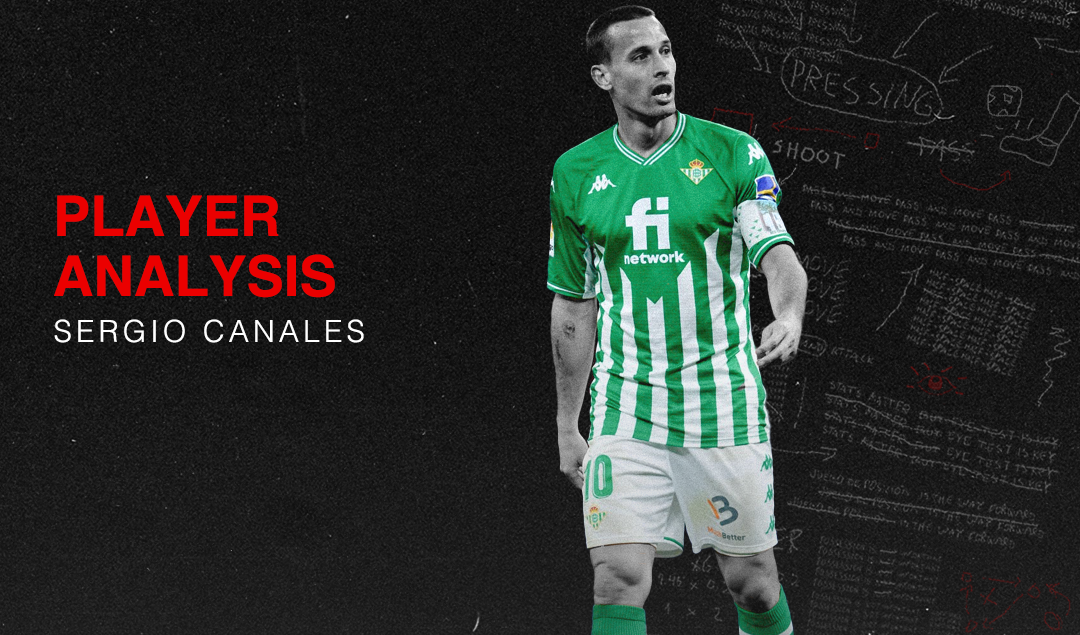 After earning promotion in 2014/15 under Pepe Mel, Real Betis enjoyed a solid 10th-place finish under the leadership of ex Brighton manager Gus Poyet, who was sacked in November 2016 and replaced by Víctor Sánchez, who staved off the threat of relegation and finished 15th.

Real Betis decided to take a chance on Quique Setién, whose flashy style of play at Las Palmas had caught the eye of Los Verdiblancos. It paid off: Betis finished sixth and qualified for the UEFA Europa League in the following 2018/19 season.

The following summer, Betis invested heavily in the transfer window to back Setién and replenish his squad, signing William Carvalho, Joel Robles, Pau López, Giovani Lo Celso, Sidnei, Takashi Inui and Antonio Barragán. However, no signing from that window has paid off more than Sergio Canales.

Born in Santander, Cantabria, Canales developed in Racing de Santander’s youth ranks before joining Real Madrid in February 2010 on a six-year deal for a fee believed to be around €4.5 million plus incentives. In José Mourinho’s star-studded squad boasting the likes of Cristiano Ronaldo, Mesut Özil and Ángel di María, Canales was tipped as a potential wonderkid.

He arrived at Real Madrid at 19 years of age with a record of 6 goals in 32 appearances for Racing Santander, making his debut against Mallorca in a goalless draw on August 29, 2010, but was unable to make an impact before joining Valencia on a two-year loan in 2011.

Canales started the season well under Unai Emery, scoring in a 1-0 win against Granada, but on October 23, he was stretchered off in a league match against Athletic Club and was sidelined with a torn knee ligament, making his return six months later and grabbing an assist against Rayo Vallecano.

He grabbed an assist one week later against Real Betis but relapsed in his injury soon after, going on to miss another six months of action. That nevertheless didn’t stop Valencia from making the move permanent in July 2012 for €7.5 million.

Canales played 32 games for Valencia from 2012 to 2014, racking up two goals, but by January 2014, he found himself surplus following the arrival of Juan Antonio Pizzi to Valencia. He was sold to Real Sociedad for €3.5 million; a move that marked the emergence of the silent magician of Cantabria we have come to acknowledge in Spanish football.

At Real Sociedad he began to grow into the player we wanted to see but were unable to at Real Madrid, building a great partnership alongside Asier Illaramendi, Carlos Vela, Antoine Griezmann and the legendary Xabi Prieto.

He scored four goals in first full season, scoring 4 goals in 36 appearances in 2014/15 as La Real finished 12th. After starting the 2015/16 campaign well at Anoeta, Canales suffered another serious knee injury, this time in the left leg, in an away match against former club Real Madrid.

After missing the first nine months of 2016, Canales returned in September and racked up 4 assists in 37 appearances under Eusebio Sacristán, following that up with an even better tally of 5 goals and 11 assists in 45 appearances.

Rather than prolong his stay at Real Sociedad, Canales headed south for Andalusia and joined Real Betis on a four-year contract in 2018. Canales emerged as a vital performer under Setién, clocking 9 goals and 3 assists as Betis finished first in their Europa League group and lost to Rennes in the Round of 32.

Whilst they fared well in the Copa del Rey, advancing to the semifinals before losing Valencia 3-2 on aggregate, their underwhelming league finish of 10th saw Setién and the club part ways at the end of the season, with ex Espanyol manager Rubi replacing him.

Canales once again delivered impressive form in the 2019/20 campaign, contributing 6 goals and 6 assists in a Betis side that crashed out of the Copa in the Round of 32 and finishing 15th in La Liga under Rubi.

Despite their poor domestic form, one positive for Betis was the emerging creative partnership between him and Nabil Fekir, who had arrived from Lyon the prior summer.

Rubi left in the summer and was replaced by Manuel Pellegrini following the Chilean’s midseason departure from West Ham in 2019.

Los Verdiblancos did not spend a single penny in the summer of 2020 after being struck by the financial impact of the COVID-19 pandemic, bringing in just three players, each on free transfers: Martín Montoya, Claudio Bravo and Victor Ruiz.

They needn’t have worried: Canales and Fekir’s chemistry in attack alongside Borja Iglesias allowed Betis to punch above their weight and seal a return to Europa.

This season, Canales has returned as the creative fulcrum of the team, breaking the lines and finding teammates further forward with his excellent passing, agility, and composed dribbling in the final third.

Betis are third in La Liga — four points clear of Barcelona and Atlético Madrid — and head into their Europa League fixture against Zenit on the back of some hot form, having beaten Rayo Vallecano 2-1 in the first leg of the Copa del Rey semifinals as well as beaten last-placed Levante 4-2 on Sunday.

As they chase a first Champions League berth since 2005 as well as a first ever European trophy, one player continues to thread the needle for Pellegrini’s side. Sergio Canales, after years of injury troubles and underwhelming performances, has emerged as a crucial force in Betis’ attack — the silent magician of Cantabria.