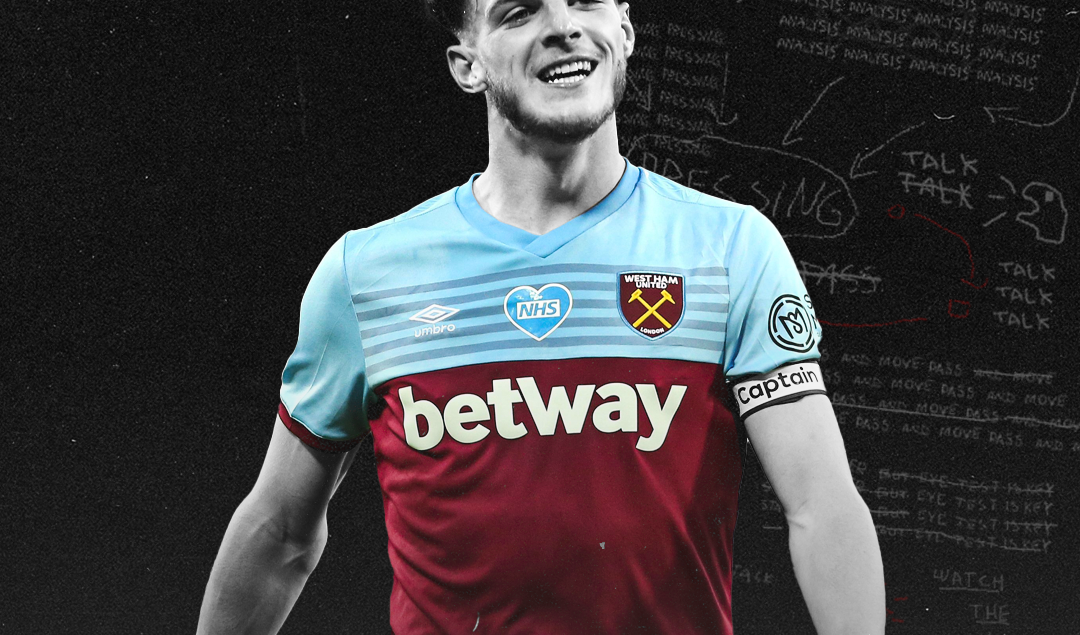 West Ham United’s English starlet, Declan Rice continues to be linked to Frank Lampard’s free-spending Chelsea for a fee north of £70 million although David Moyes is looking to keep hold of the ex-Ireland international if the Hammers are to stand any chance of staying in the Premier League and improving on their underwhelming 2019/20 campaign.

Many pundits and fans of the Premier League have raised their eyebrows at the apparent £80 million fee that the East London outfit value Rice at, but since his rise to the first team, the West Ham Academy graduate has been quietly spectacular in the centre of the park for almost 3 seasons and is still just 21 years old.

His career is now at a crossroads: does he go back to his boyhood club for a record fee despite the fact they released him as a 14-year old? Or does he take the captain’s armband and further his hero status at a struggling West Ham where he’ll be in danger of relegation?

The tough-tackling midfielder was born in Kingston upon Thames, London in January 1999 and was enrolled into Chelsea’s prosperous academy in 2006 at the age of 7. Here he met the likes of Reece James, Tammy Abraham, Mason Mount and Fikayo Tomori who have since broken into the Chelsea squad after graduating from the academy and completing several successful loan moves. 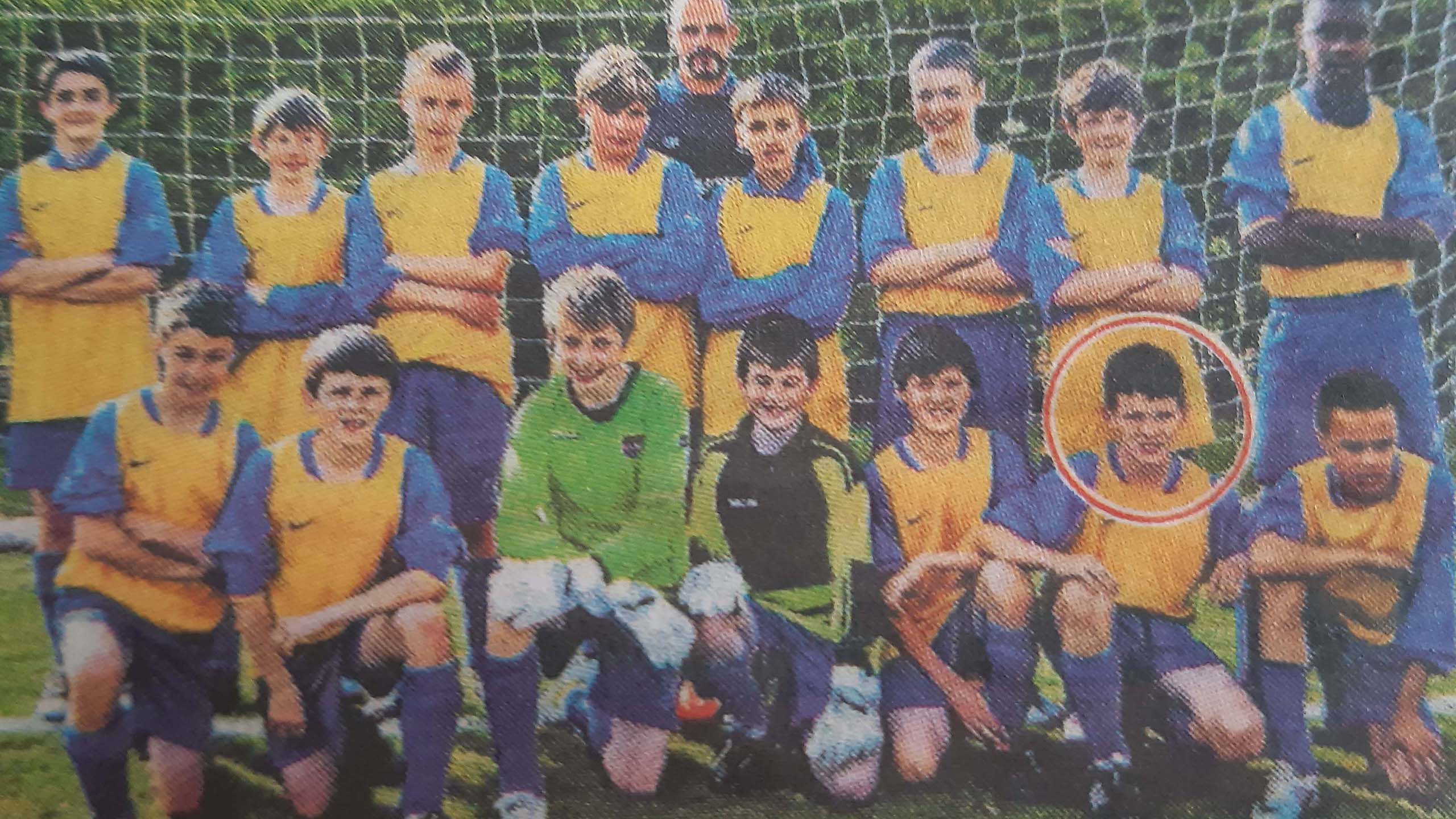 Rice’s path to the Premier League wasn’t as simple however, and he was released at the age of 14, with the club stating that he didn’t make the grade to compete for them at U-16 level. Just hours after his release however, Rice was offered trials at both Fulham and West Ham and after impressing the West Ham academy coach, Terry Westley at Chadwell Heath, Rice joined ‘The Academy of Football’.

Although Rice pleased his coaches and managers at youth level through his leadership capabilities and tough tackling, he seemed to be in the shadow of West Ham’s other prospects of the same age in Grady Diangana, Nathan Holland and Dan Kemp, and on one occasion Rice was given ‘one last chance to impress’ in an U18s game which may have signalled his release had he not proved to be the ‘best player on the pitch’ that day.

Rice was given his first professional contract in December 2015, after developing physically and improving his all-round game and enjoyed some impressive performances for the U-23s in the following two seasons.

Due to his Irish descent (his Dad’s parents are from Douglas in Cork) Declan Rice chose to represent the Republic of Ireland on the international stage and he made 10 appearances for the Ireland U-19 and U-21 sides before making his Premier League debut for West Ham against Burnley on the last day of the 2016/17 season. This was just five days after he captained the West Ham U-23s to promotion against Newcastle and he went on to make his full debut against Southampton at the start of the 2017/18 Premier League campaign.

At the age of 18 (although he turned 19 that January), Rice made 26 Premier League appearances in the 2017/18 season with most of them coming at centre back, especially in the second half of the season when David Moyes took over from Slaven Bilić and used Rice as part of a back three alongside Angelo Ogbonna and Aaron Cresswell. The teenager showed his versatility from the offset though by making 5 appearances next to Mark Noble in the centre of the park.

That season Rice completed 79% of his passes and 78% of his tackles while he showed the mentality and leadership capabilities of a 28-year old. This impressive breakthrough season culminated in him being named runner-up for ‘Hammer of the Year’ behind the eccentric Marko Arnautović who had sprung to life under Moyes.

That summer, David Moyes’s first spell in charge of West Ham was brought to a halt by David Gold and David Sullivan in favour of a more exciting, attack-minded coach in Manuel Pellegrini. 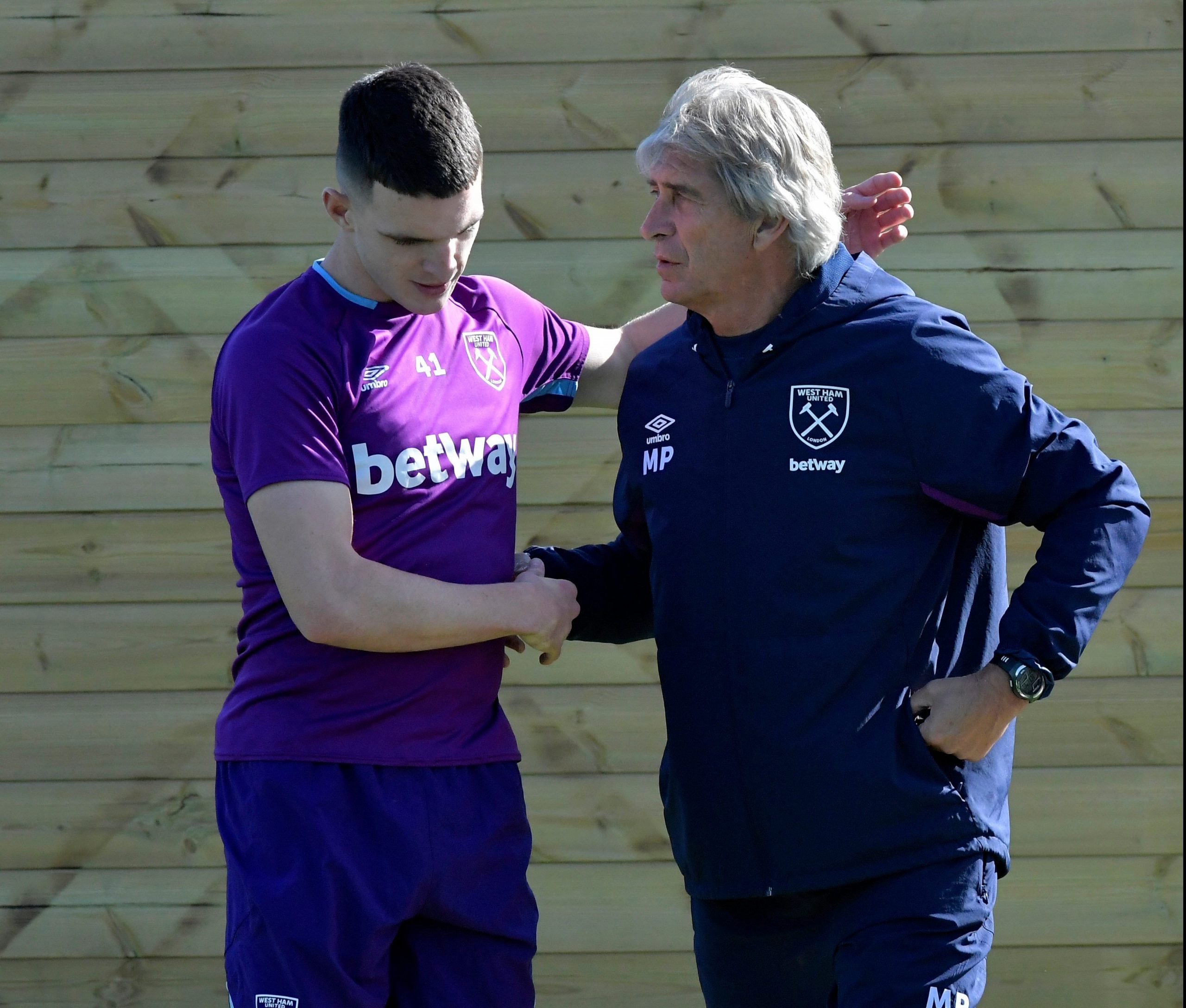 The Chilean entrusted Declan Rice from the start of his tenure and utilised him in the defensive midfield role against Everton at Goodison Park after it became clear that a Mark Noble-Jack Wilshere double pivot wasn’t defensively sound by any means (the Hammers suffered 4 defeats from their first 4 which coincided with Rice’s absences). Rice thrived in the defensive midfield role and went on to be a mainstay in the Hammers’ side for the remainder of the season.

While his distribution or dribbling wasn’t outstanding that season, he proved to be a defensive wall which operated in front of the East Londoners’s defence, mopping up loose balls and stopping some of the Premier League’s best players in their tracks.

Due to his on-field passion and obvious love for the club, Declan Rice immediately clicked with the West Ham fans who are no strangers to an exciting young prospect coming through their academy after witnessing Frank Lampard, Rio Ferdinand, Michael Carrick and Joe Cole all come through the ranks.

The roof of the London Stadium nearly came off when 60,000 West Ham fans saw ‘one of their own’ curl the ball past Bernd Leno in West Ham’s 1-0 win over Arsenal in January 2019 as Declan Rice scored his first goal for the Hammers.

This special moment, that clearly meant so much to the then 19 year old, coincided with his decision to switch allegiances from the Republic of Ireland to England despite the fact that he had now made three appearances in friendlies for the Boys in Green.

Six months prior to this decision, which caused a great amount of controversy from both Ireland and England fans, Rice had been omitted from the Ireland squad which was set to play Wales by the then manager Martin O’Neill over concerns that he was considering the switch. 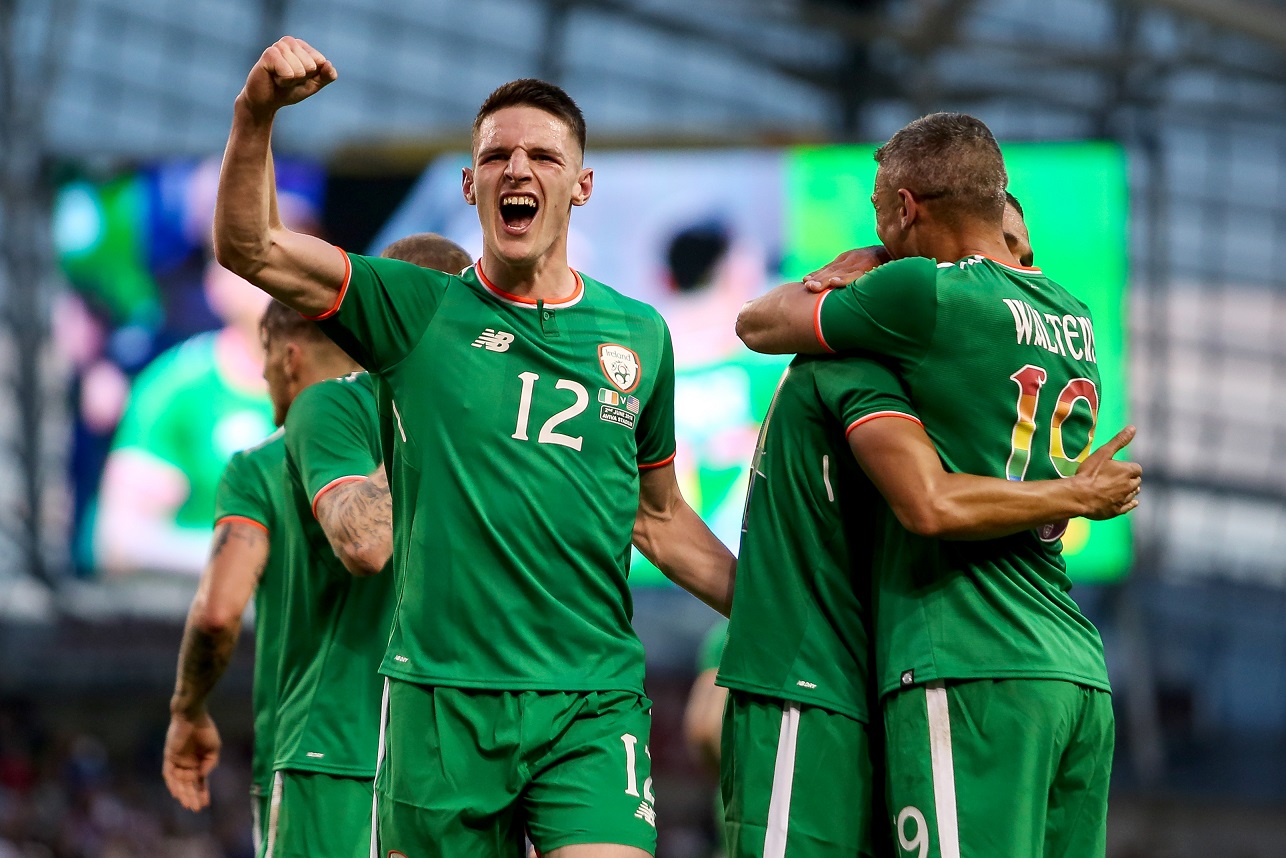 In December 2018, Rice spoke to the new Ireland manager, Mick McCarthy and his assistant Robbie Keane who saw him as a potential future captain of Ireland and promised the youngster that he would build the team around him. However, Rice saw himself as English and surveyed that as a result of his age, profile and level of performance, he’d stand a good chance of getting into the England side in the near future.

He didn’t have to wait long, and just a few months after he had announced his decision, Rice made his first appearance for England during a win over Czech Republic at Wembley which meant that he was the first player to play for both countries since Jack Reynolds in the 1890s.

In the space of a few months, the youngster had made his 50th appearance for West Ham, his England debut, and had signed a new 5 year deal with the East London outfit while he was later nominated for the PFA Young Player of the Year award and won West Ham’s Players’ Player and ‘Young Hammer of the Year’.

Rice entered the 2019/20 season in high spirits as one of the Premier League’s most talented young midfielders. Last season Rice proved to be the shining light for West Ham in a disappointing and underwhelming campaign which was riddled with injuries, VAR and goalkeeping woes and a managerial change as the Hammers reverted back to Moyes, who had been unemployed since being sacked by West Ham in the summer of 2018.

Nevertheless, Declan Rice once more enjoyed an outstanding season and was rewarded for it by winning ‘Hammer of the Year.’ The stern defensive aspect of his game was maintained throughout the campaign as he completed 5.1 tackles and interceptions per 90 while his dribbling and passing massively improved and in the flesh he seemed a lot more assured and confident on the ball.

This is reflected in the 86% passing accuracy which he boasted as well as the 3 assists (3 more than 2018/19) and 0.6 key passes per 90 which improved by 0.3 from the previous season. The Englishman went from 0.8 completed dribbles in the 2018/19 season to 1.3 showing that his game was adapting and improving.

The defensive midfielder rounded off his season with a miraculous long-range strike against Watford which helped to keep West Ham up and send the Hornets down, showing that he was dangerous in the attacking third as well as the defensive one. Furthermore, the stats proved that Rice was one of the best defensive midfielders in the Premier League as he completed the 2nd most recoveries, tackles and interceptions of any defensive midfielder in the league across the season. 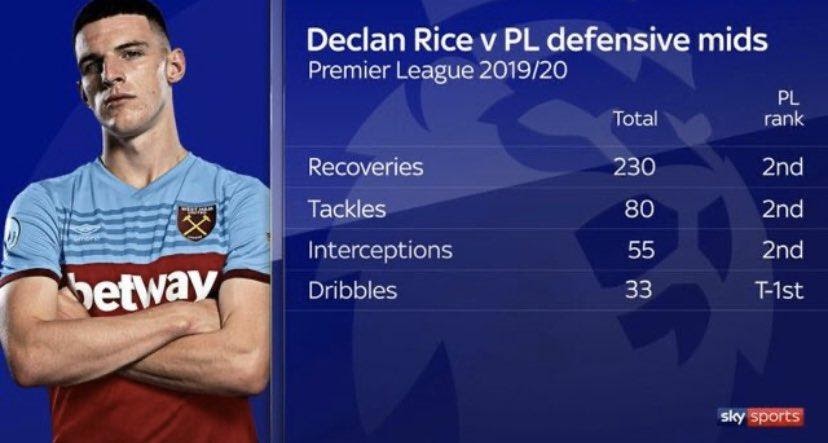 Ever since the conclusion of the 2019/20 Premier League season, Declan Rice has continuously been linked to his boyhood club, Chelsea, with reports claiming that the West Londoners are keen to spend up to around £80 million on the player due to Frank Lampard’s admiration despite signing Kai Havertz, Timo Werner, Hakim Ziyech and Ben Chilwell for hefty fees.

A plethora of media outlets have claimed that Lampard would look to use Rice as a centre back and although the youngster has proved to be an exceptional defensive midfielder, he is clearly more than capable of reverting back to centre back if asked to.

Furthermore, Rice may find it hard to break into Chelsea’s star-studded midfield due to N’Golo Kanté’s reputation, Mateo Kovačić’s excellent 2019/20 campaign and Mount and Havertz’s pedigree and incredibly high ceilings. Should Rice join the Blues, he would probably slot into the heart of defence next to Thiago Silva.

In West Ham’s 2-0 loss at the London Stadium to Wolves in June, Rice was used at centre back for the first time in over a year and a half and looked calm, assured and great on the ball, while he showed positional awareness and tracked the runs of Raul Jiménez impressively.

Rice would most certainly fit the bill as a ‘Chelsea level’ centre back and could be used in the middle of the park as well. At 21, he also fits the age profile of the ideal Frank Lampard signing and would fit into his exciting project nicely. Due to the fact that his family are all Chelsea fans and he is best friends with Mount, it is also likely that Rice would relish the chance to play in West London and it would be a fantastic signing for the Blues if they can scrape together the funds.

Declan Rice’s rise to becoming West Ham’s best player has been fantastic to watch and he portrays everything that the East London club and the fans portray. He may look to follow in the footsteps of one of his idols growing up in Frank Lampard by making the short journey from East London to West London and he would certainly add leadership, youth and solidity to the Blues’s backline/ defensive midfield.

On the flip side, he may be loyal to the club that gave him a chance by staying in Stratford with West Ham and David Moyes alluded to this a few months ago by stating,“My idea is to build West Ham around Declan Rice. He is a very big part of the club to me.” He’s certainly already proving himself again this year, as the likelihood of a shock drop to the Championship has lessened for the Hammers since the start of the season.

However, with a civil war between the fans and the board raging, and Mark Noble’s public disgust at the sale of Grady Diangana, it seems unlikely that the ever professional Rice will stick around to see the outcome of the well-documented protests against the Brady, Sullivan and Gold regime.