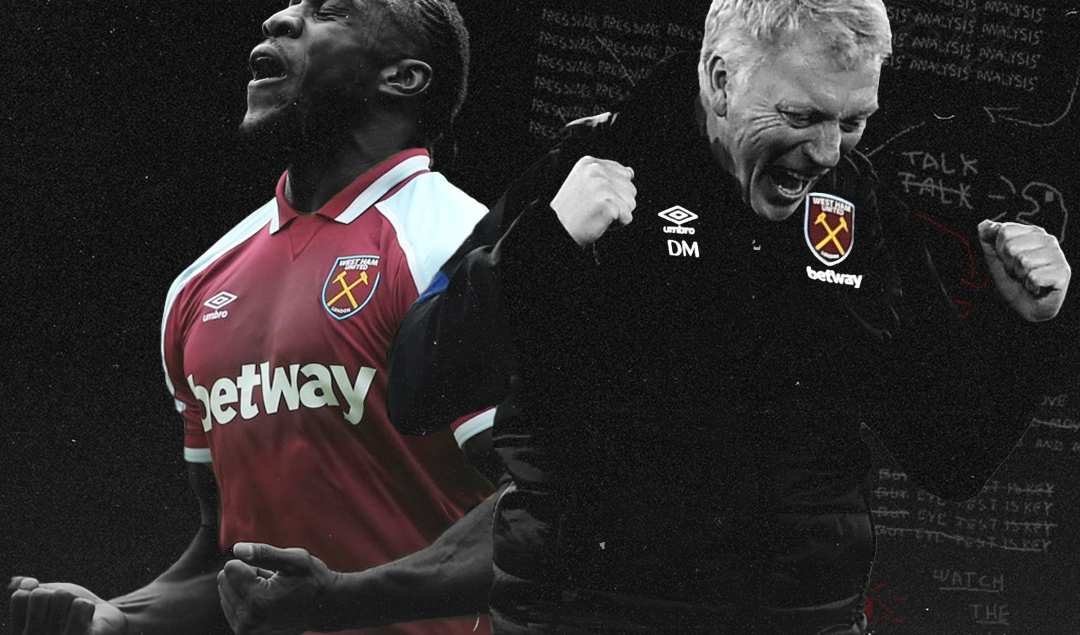 David Moyes took over West Ham for the second time in 2019, during a difficult period for the club. Languishing in 17th place in the table almost halfway through the season, the club was only one point above the drop zone. The Scotsman’s job was simple: Save the club from relegation. Nearly two years on, Moyes has done much more than just consolidate the Irons’ Premier League status.

A remarkable 6th place finish in the 2020/21 season, has been followed by a fine start to this campaign. Flying high in third place following their 3-2 demolition of Liverpool, the Hammers fans are dreaming of watching their side play against the top sides in Europe in the Champions League.

Moyes’ arrival at West Ham was greeted with an air of pessimism. While his first spell at the helm saw the club finish comfortably safe from relegation, Moyes’ reputation had already been damaged by his previous jobs.

A disastrous spell at Manchester United saw Moyes sacked in April of his very first season. After an uninspiring spell at Real Sociedad, Moyes returned to English football with Sunderland in 2016, but left the role after failing to keep The Black Cats in the top flight.

The only person on the planet who breathed a sigh of relief when the covid 19 pandemic postponed the Premier League season in March 2020 was David Moyes. His return to the club had not yielded instant results and with 29 games gone, only goal difference separated West Ham from the sides in the relegation zone. West Ham’s dismal form had the side in deep trouble.

When Project restart got underway in the summer of 2020, the Hammers got off to the worst possible start. Losing two-nil to both Spurs and Wolves had even the most optimistic Hammer fearing the worst.

July 1, 2020 can be seen as a watershed moment for David Moyes and his West Ham side. Heading into halftime one-nil down to Chelsea after a Willian penalty, the Hammers were doomed. 45 minutes later, Andriy Yarmalenko strode towards goal and slotted a 90th-minute winner to secure a 3-2 victory for the Irons.

West Ham tasted defeat only one more time that season, finishing comfortably above the relegation zone. But while the Chelsea game is an extremely important part of the Moyes story, the groundwork the Scot had laid in the preceding months played just as vital a role in West Ham’s survival and subsequent revival.

The signings of Tomas Soucek and Vladimir Coufal from Slavia Prague in January 2020 went completely under the radar. 18 months on, they look like two of the best Premier League signings in recent years. Coufal, a dogged and tenacious full-back added some much-needed steel to the side. Soucek on the other hand, with his combination of athleticism, strength and an eye for scoring goals, gave West Ham an entirely new attacking dimension.

These signings are particularly noteworthy given West Ham’s hit or miss transfer record over the past decade. High-profile signings like Sebastien Haller, who couldn’t oust Michail Antonio, and Dimitri Payet, who left the club high and dry after a little over a year, are prime examples of this shortcoming.

Since Moyes’ arrival, the transfer ‘Hit’ rate has been far higher than the ‘Miss’ rate. Said Benrahma, Craig Dawson and the aforementioned duo of Soucek and Coufal have all lit up the London stadium in their spells at the club. Not only has Moyes been shrewd in the transfer market, but he has also worked remarkably well with the players that he already had at his disposal.

The hallmark of any good manager is that they make players better, and at West Ham, Moyes has exponentially improved a number of players’ games. Pablo Fornals has evolved from being a flop of the Manuel Pellegrini era to being one of the first names on the team sheet. Michail Antonio has produced the best football of his career under Moyes, becoming West Ham’s all-time top Premier League goalscorer earlier this season.

Perhaps the player that has benefited the most from Moyes’ coaching is Declan Rice. Rice has always been a highly-touted prospect and his potential has been clear to see for a long time. When Moyes took charge, however, there was a feeling that Rice’s career had stalled to a certain extent.

In the two years that have followed, Rice has developed into one of the top defensive midfielders in Europe. His defensive qualities have always been evident. However, in an attacking sense, Rice is a much more complete player now than he was when he first broke into the first team.

While Rice has obviously worked tirelessly to improve this aspect of his game, the role Moyes’ coaching has played should not be marginalised. Rice’s excellent displays with England at Euro 2020, have seen him become perhaps the most sought-after defensive midfielder on the planet.

West Ham are perhaps the most well-trained side in the Premier League. Each and every single player knows exactly what their role is in the team. This collective clarity makes them one of the toughest sides to play in England. The evidence of the work Moyes and his staff put in on the training ground was clear to see at a game that this journalist attended earlier this season.

When the Hammers played Manchester United in September, every person in the London stadium that day could see the difference in structure and identity between the two sides. While Manchester United emerged victorious following a late Jesse Lingard winner, it was obvious that West Ham were the far better-drilled team.

Out of possession, West Ham plays a 4-5-1 formation, with Antonio often dropping back towards midfield to crowd this space. The duo of Soucek and Rice in midfield are experts in breaking up play, providing protection to the back four, and launching counterattacks.

When the Irons regain the ball, they break at pace and flood players into the box, operating in a 4-2-3-1 formation. On multiple occasions in the second half against Liverpool, the Hammers pounced on loose midfield passes from Thiago and Fabinho, and within a few seconds, were bearing down on Allison’s goal. If not for the brilliance of Virgil Van Dijk on a couple of occasions, West Ham may well have added to their tally.

Possibly the biggest weapon in West Ham’s locker is their ability from set-pieces. Players like Aaron Cresswell, Jarrod Bowen and Fornals are specialists from a dead ball situation. West Ham’s prolificacy from corner kicks is well documented, with five goals coming from such situations already this season (Whoscored.com). This threat was clear to see against Liverpool, with two of West Ham’s goals coming from corners.

Moyes Back Doing What He Does Best

It has been noted in recent weeks the similarities that exist between Moyes’ Everton team and his current West Ham side. At their peak, Moyes’ Everton were the most difficult side to play in the Premier League. Goodison Park was feared by every team, as was Everton’s physical attributes and ability on set pieces.

In both sides there was an extremely physical goal-scoring midfielder in Soucek and Marouane Fellaini. In both sides, Moyes’ most creative players also put in the work off the ball, like Benrahma/Fornals and Leon Osman/Steven Pienaar.

Perhaps the biggest similarities between Moyes’ two best sides is the level of support the manager has from the fans. Goodison Park was renowned for having a ferocious fanbase during the Moyes era, something which the club has struggled to replicate in the 8 years since his departure.

For three or four years, the London Stadium felt anything but homely to the West Ham faithful. Tepid results on the field and chaos in the boardroom left the fans pining for Upton Park. Situated miles away from the East end, a huge disconnect existed between the fans and the stadium.

Moyes has changed all of this. The atmosphere at the Liverpool game recently was electric. The stadium, which once had thousands of empty seats at each game, is now close to being sold out on a weekly basis.

Hammers fans are back on side. The sight of Declan Rice celebrating in front of fans amidst a plethora of bubbles following the Liverpool game, is a far cry from the ugly scenes in 2018, when fans stormed the field during a three-nil loss to Burnley, demanding the resignation of the board.

Speaking on Sky Sports, Jamie Carragher mentioned how he expects West Ham to fall away from the top four, have a decent season and compete for a Europa League spot. In any other season, West Ham fans would be ecstatic with this outcome.

This season, however, feels different. Last year, West Ham finished in 6th place in what was seen as a surprise by many. However, given their excellent start to this campaign, coupled with Leicester City and Manchester United’s poor starts to the season, who’s to say that the Irons can’t challenge for a top-four spot.

Manchester United, Manchester City, Liverpool and Spurs have all already been defeated by West Ham in either league or cup competitions, showing how the East Londoners are capable of defeating any side on their day.

With the Hammers in the last 8 of the league cup, the third spot in the league and cruising through Europa League qualifying, it’s all set to be a season to remember for the Irons. With fantasies of winning silverware and competing in Europe’s elite competition next season running wild, why shouldn’t fans dream? Perhaps for once, fortunes won’t be hiding for the irons.