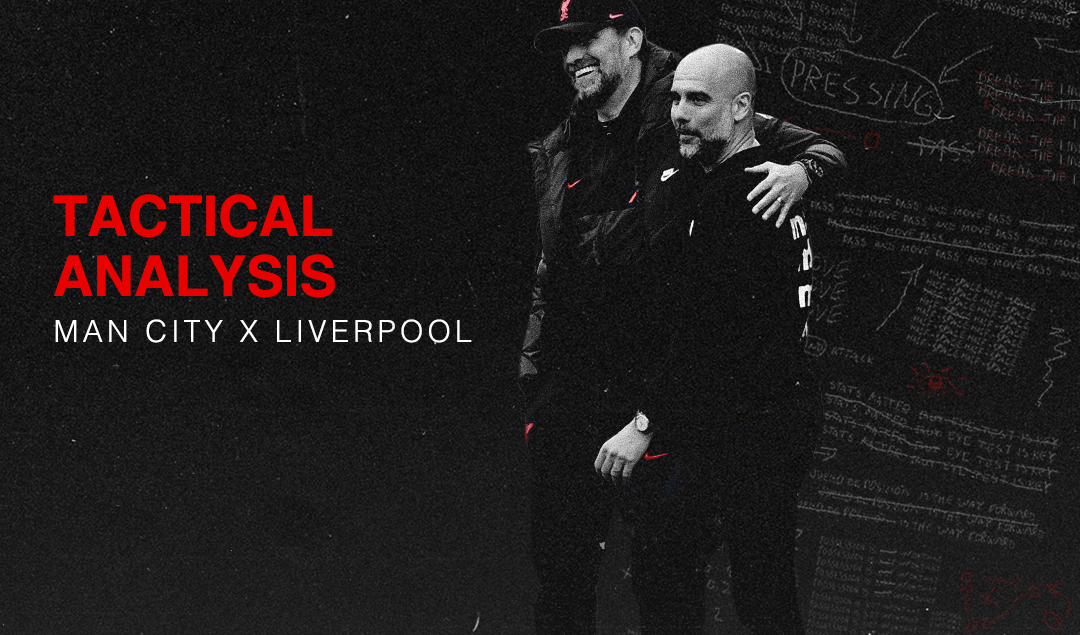 Liverpool visited the Etihad Stadium in hopes of securing all 3 points heading into the last 7 matches of the campaign, with only a point separating the two juggernauts ahead of this clash.

Pep Guardiola’s side, as we’ve come to expect had other plans, going ahead early through Kevin De Bruyne, only to be pegged back moments later courtesy of a well-worked team goal that was cooly finished by Diogo Jota.

The hosts would go on to reclaim the lead shortly before halftime thanks to a brilliant cross from Joao Cancelo towards Gabriel Jesus which caught the Liverpool backline unawares following a poorly cleared corner, the former duly obliged as he finished past a helpless Alisson in goal.

As if the game had not lived up to its billing already, Jurgen Klopp’s men found an immediate response after the half as the ever-present pair of Sadio Mane and Mohamed Salah combined, with the former applying the finishing touch to even things up once more.

The spoils would be shared in the end, leaving both sides content and unbeaten in this fixture having drawn 2-2 at Anfield six months back. A fair result.

In the initial stages of the game, Liverpool operated with Jota as the centre forward, Mane down the left channel and Salah on the opposite wing as expected. The wingers cut out the passing lanes towards the fullbacks while Jota kept Rodri under his covershadow.

The Spanish midfielder kept dropping deeper to open the passing lane for John Stones and Aymeric Laporte. Sometimes Rodri even dropped to form the 3 man backline when the fullbacks had pushed up field, inviting Mane to move out.

To combat this, Jordan Henderson kept a close eye on Bernardo and often followed him deep inside City’s territory. Nonetheless, that posed other problems.

Liverpool’s frontline were too high and this forced the back four to move forward as well leaving space in behind for Raheem Sterling to exploit with his darting runs whenever the opportunity presented itself. Phil Foden generally occupied the spaces left by Henderson while Cancelo pushed forward behind Trent Alexander-Arnold.

On other occasions, Foden was on the far left stretching the pitch and looking for runs behind Trent while Cancelo provided support in the deeper areas.

On the other side, however, Jesus kept tucking inside regularly to pull away Andrew Robertson, opening up the spaces for the run of Walker down the right wing. This happened on a number of occasions and created a few half-chances for Man City.

Eventually, Liverpool decided to settle in a midblock and Henderson stopped following Bernardo all the way into City’s territory. This however didn’t solve the problem as the fullbacks kept moving up the line and as Salah and Mane failed to track back all the way, it was a 2V1 overload down the wider areas.

There were a few occasions where Trent completely shut off and failed to cover his man. Jesus’s goal is the clearest example where he simply allowed him to take the run from behind and score.

Liverpool also had a tough time dealing with a few runs down the central channel, especially from De Bruyne. In order to maintain the structure, Liverpool’s midfield generally kept a close distance to their forwards, allowing some spaces between the lines which were generally covered by Fabinho.

De Bruyne in turn generally kept occupying the halfspaces on the far side and it was too much ground for Fabinho to cover alone.

His runs down the central channel wreaked havoc on a number of occasions and the goal (even though it was a deflection) stands as a clear example. Fabinho failed to deal with him and a shot was allowed which eventually turned out to be a goal.

City pressed in their usual 4-4-2 shape with Raheem Sterling and Kevin de Bruyne leading the line. Phil Foden and Jesus dropped back with the fullbacks while Rodri and Bernardo Silva covered Fabinho and the near-side midfielder.

Liverpool relied more on long balls from Virgil van Dijk and Trent Alexander-Arnold to break through City’s structure. Sadio Mane and Diogo Jota kept switching positions as they usually do with Andrew Robertson ready to move up the line whenever required.

However, the runs in this game from both fullbacks were quite limited due to the quality of opposition and evenness of the game. Liverpool kept switching to the far side with long balls from Thiago in midfield in order to stretch City’s organized structure.

The fullbacks also tried providing long balls to the forwards from deeper areas. A few opportunities opened up in the process but City were quick to close it down. Liverpool weren’t their best while moving forward but they were clinical when the opportunities arose.

The two goals were rare opportunities (once where the fullbacks linked brilliantly and the second was a rare Kyle Walker error as he misjudged Mane’s run through the middle) and Liverpool made perfect use of it. We must add that both moves started from long balls from Van Dijk and Thiago to the far right corner towards Trent.

Once again it’s City’s title to lose. The 7 games when compared on paper look easier for City while Liverpool still have to face the likes of Spurs and Manchester United.

The race to be crowned champions of England is still on but City clearly have the edge now with an extra point in their bag. The sides meet again next weekend in the FA Cup at Wembley. Another mouth-watering clash awaits.