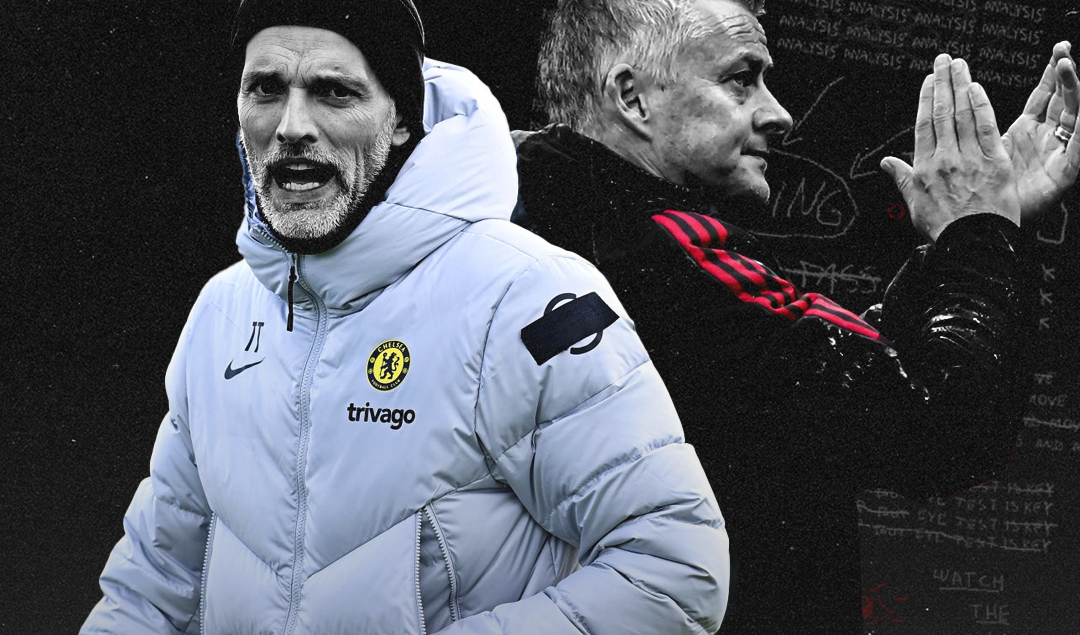 It has been a tough start to the season for Ole Gunnar Solskjaer and Manchester United. After the acquisition of veteran defender and World Cup winner Raphael Varane most of the side’s defensive woes seemed to be a thing of the past but it hasn’t gone according to plan with the Red Devils only keeping two clean sheets since August.

While Chelsea are marching on with 26 points out of 11 games, United lie 9 points behind with just 17. After the humiliation against Liverpool, Ole decided to bring back a 3 man defense with wing-backs. He once used it in every big game in seasons past and it worked out quite well in a few.

Let’s take a closer look at the structure and break down the difference between Chelsea and Manchester United’s back 5 structures. We will mostly discuss the Manchester derby to explain their system.

Off the ball, Thomas Tuchel’s Chelsea maintain a narrow pentagon as the first line with the last line staying high. The wingbacks have the freedom to move up and cover the opposition fullbacks and the centre backs are quite proactive to react against the wingers. The narrow central structure also ensures that fewer spaces are available between the lines and Chelsea have a numerical advantage on the near side.

The pressing system is extremely well worked. The shape transforms to a 5-3-2 with the striker pressing a centre back. The ball-side winger either cuts out a central lane and closes down the spaces or is tasked to engage the fullback. During this phase, the far side winger drops back to form a midfield trio alongside Jorginho and N’Golo Kante.

Ole has tried to implement a structure similar to Tuchel’s to ensure stability at the back. However, there are certain differences that are creating all the differences in the system. In last week’s Manchester derby United maintained a 5-1-3-1 structure with Scott McTominay as the defensive midfielder and Cristiano Ronaldo leading the line.

At first, they tried to keep it narrow to nullify City’s midfield prowess. However, it didn’t work out for long. Unlike Chelsea, the United fullbacks don’t have the luxury to step out easily against opposition fullbacks. City’s system ensured that Phil Foden and Gabriel Jesus generally hugged the touchline and made runs around the structure instead of cutting inside.

This made life difficult for the United fullbacks, especially Aaron Wan-Bissaka. He was often caught out in a 2V1 position against Joao Cancelo and Phil Foden. Bruno Fernandes didn’t commit himself all the way back and Eric Bailly was hesitant to leave the central zone. As a result, the wider areas always posed a threat to United.

As a result, they decided to make it a flat 5-4-1 system. That exposed different problems, however. Against a flat 4 line in midfield, City started opening the spaces between the lines. Ilkay Gündogan always maintained a higher starting position while Kevin De Bruyne and Bernado Silva kept interchanging roles.

With time, a free man emerged in the form of Rodri and City enjoyed a zonal numerical advantage. As a result, they maintained their position with ease (71% in the first half) and kept knocking on United’s door, eventually breaking them down through two dangerous crosses from Cancelo out on the left flank.

The problem also lies in the last line. The roles of the players are not yet clear and there remains confusion among the players it seems regarding the shape and pressing triggers. Space opened up quite easily in the last line and City could have easily increased their lead if David De Gea had not been at the top of his game for most of the time.

Chelsea’s system allows positional flexibility for the wingbacks and actively allows them to move inside the box. The wingbacks have a wonderful understanding with their respective wingers and can switch roles instantly. Generally, the wingbacks are expected to maintain width but that’s not a necessity.

The roles keep changing with Thomas Tuchel following Pep Guardiola’s footsteps in the form of inverted fullbacks hugging the opposition’s box.  During this phase, the wingers move wide to stretch the opposition and open the half-spaces. They are extremely comfortable in both roles and the random switches make it an even more difficult job for the opposition.

“If you play in a back three, it is not really a full-back position; more a midfield position,” Tuchel said before the midweek victory over Malmo when Cesar Azpilicueta and Marcos Alonso were given the nod. “I would not call them defenders. They have to defend in some moments, but they are freer to attack and have a shorter way to the opponent’s box than as full-backs. We bring them to the box at the end of our attacks to increase the goal threat.”

As we mentioned before, the roles of the players are not yet clear in this new system. Added to that, United fail to utilize the full width of the pitch. The right flank is barely used in the attacking system and Wan-Bissaka is often isolated in the right channel.

The selection of players in the final third makes it even more difficult for them to adapt to certain roles. Players like Mason Greenwood are at their best operating in half-spaces as inside forwards but not as wingers hugging the touchline. Similarly, deploying Bruno centrally is a necessity for Manchester United.

This creates an over-dependency on the left side making United’s attack more predictable. Added to that, Ole’s side are not the best at switching play quickly from one flank to the other. Unlike Luke Shaw, Wan-Bissaka is not a very attacking wingback.

Wan-Bissaka’s crosses have improved from the seasons before but it’s still not enough. Added to that, he does not pose an attacking threat by himself, and he barely makes the overlapping runs behind the fullbacks. As a result, the opposition often try and maintain a narrow line overcrowding United’s left side.

There also seems to be confusion regarding the roles down the left wing. While Ronaldo leads the line, Fred is often assigned to support Shaw down the left channel. With McTominay present centrally, Fred has the freedom to move up and exploit the half spaces. This can also create numerical overloads on the near side.

However, we barely find Fred making these runs forward. Instead, he drops and provides a passing lane for support in the central zone. The near post runs are taken alternately by Greenwood and Ronaldo while Bruno scans for spaces in between.

To create 2V2 situations, Bruno also moves wide whenever possible. The crosses towards Ronaldo are often quite effective but a narrow line with a central overload against Ronaldo is often too much to break down.

The back 5 structure can add much-needed stability if used properly. However, Manchester United need to implement it in a way it suits the profile of their players. While Thomas Tuchel’s side has just conceded 4 goals in 11 games in the league, United have conceded 4 in the last two games against City and Atalanta. The role of each player needs to be defined clearly and Ole Gunnar Solskjaer must ensure that this system does not become too predictable for the opposition.