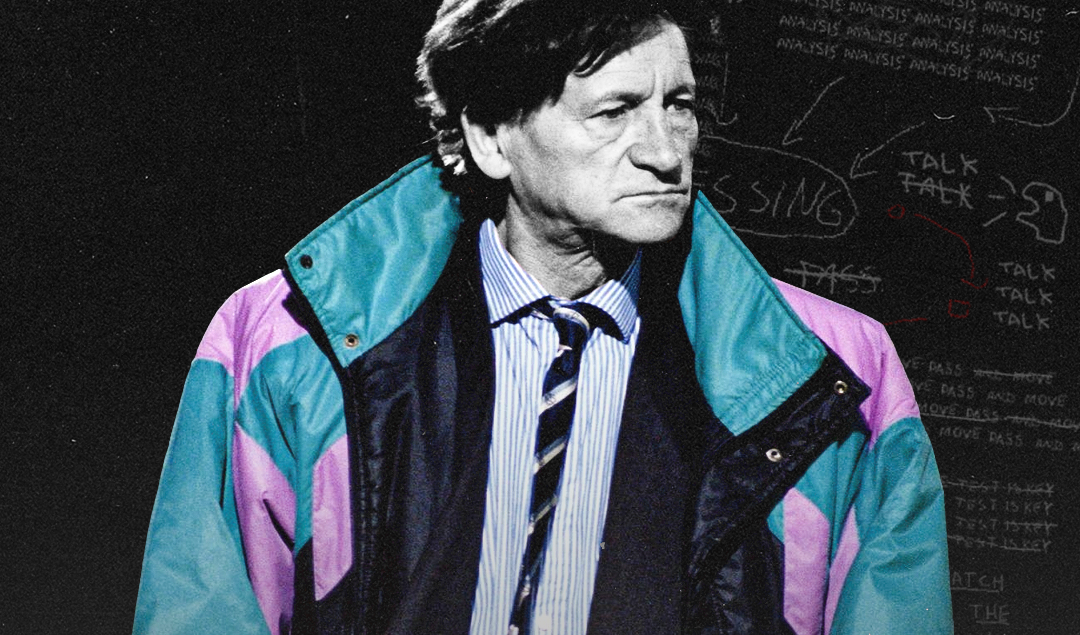 Whilst Basile Boli, Laurent Fournier, and Dragan Stojković all arrived as new signings during the summer of 1990, Bernard Tapie’s biggest coup came in the sporting goods department when he purchased an 80% stake in Adidas. Over the next three years, Tapie took Adidas from the verge of bankruptcy to a fully functioning and profitable company, hiring former Nike chief of design Bob Strasser, changing the logo from the lotus flower to the modern three stripes, and moving the bulk of manufacturing to Asia.

Marseille picked up where they left off with five wins and two draws in their first seven matches, and on September 8, Tapie hired Franz Beckenbauer to serve as the club’s Sporting Director. Fresh off leading West Germany to victory in the 1990 FIFA World Cup, Beckenbauer’s arrival may have seemed like a major coup from Tapie’s perspective, but for many within the club, it was a betrayal. Feeling that his authority was undermined, Gérard Gili resigned and accepted a job offer at rivals Bordeaux. The fans, meanwhile, had picked their side well before Der Kaiser managed his first match, favoring the Frenchman who had ended their long-awaited trophy drought over the legendary German defender.

After beating Monaco and Saint-Étienne, Beckenbauer’s side succumbed to a 1-0 defeat to a Cannes team led by an 18-year-old Zinedine Zidane. Subsequent losses to Sochaux and Nancy did little to reassure Tapie of his new manager’s competence, and after a humiliating 4-0 defeat to Auxerre on December 9, Beckenbauer was shuffled into a backroom role, with Raymond Goethals taking the reins. Having previously coached Anderlecht and the Belgian national team, Goethals’ fearsome Bordeaux side had been a constant thorn in the side of Marseille throughout the start of Tapie’s reign.

The Belgian manager opted for a radical 3-4-3 formation, with Abedi Pelé and Chris Waddle partnering Jean-Pierre Papin in attack and Manuel Amoros and Éric Di Meco operating as wingbacks. A 7-0 evisceration of Lyon set the tone for the rest of the season, as Marseille chased after a historic treble. They would go on to win their third consecutive league title, although they were downed in the Coupe de France Final by Monaco, with a late goal from Gérald Passi giving Arsène Wenger the first cup triumph of his coaching career. Nevertheless, their performance in Europe would serve as the barometer of success by Tapie’s increasingly lofty standards.

Following routine wins against Dinamo Tirana and Lech Poznań, Marseille faced off against Arrigo Sacchi’s Milan in the European Cup quarterfinals. The Rossoneri took the lead early on after Ruud Gullit capitalized on a costly error from Mozer, but Papin’s equalizer allowed Marseille to pick up a crucial away goal at the San Siro. The return match was a heated affair with five yellow cards doled out, but the hosts broke the deadlock in the 75th minute when Papin glanced a header towards the edge of the box and into the path of Waddle, whose sizzling volley skipped past Sebastiano Rossi in goal.

With just two minutes of stoppage time remaining, the floodlights went out at the Vélodrome, forcing referee Bo Karlsson to temporarily halt the match. When the light was restored, Milan director Adriano Galliani and his players refused to take the field, relishing the possibility of a replay. The match was abandoned, with UEFA awarding a 3-0 victory to Marseille. Milan, champions of the past two European Cups, were banned from European competition for the following year, whilst Galliani was suspended from official functions until July 1993. In the wake of the national embarrassment, Arrigo Sacchi left to take control of the Italy national team, with Fabio Capello replacing him at the helm of the Rossoneri.

After brushing past Spartak Moscow in the semifinals, Marseille booked their tickets for Bari, Italy, where they would face off against Red Star Belgrade in the Final. The match was a dull encounter, with Ljupko Petrović’s young and inexperienced team playing for penalties from the offset and grinding out a stalemate over 120 minutes. Robert Prosinečki converted the opening spot-kick for the Yugoslavian side, but Amoros’ resulting attempt was comfortably saved by Stevan Stojanović. Red Star Belgrade prevailed as champions, whilst Marseille were once again cruelly denied at the final hurdle.

Goethals was sacked and replaced by Tomislav Ivić, who lasted just a few months before being given the boot; in doing so, the Croat became the second manager in Ligue 1 history to be sacked with his team leading the league table. Tapie turned to his trusty Belgian tactician once again, who steered Marseille to yey another league title in emphatic fashion: 23 wins, 12 draws, 3 losses. Nevertheless, euphoria and triumph took a backseat to the tragedy, embarrassment, and gloom that would encompass the 1991/92 campaign.

After defeating Valenciennes and Caen, the Marseille squad traveled to the island of Corsica to face Bastia in the Coupe de France semifinals. Looking to take advantage of the additional revenue that France’s most prestigious and popular club would bring, Bastia’s board decided to construct a large-capacity stand to increase the number of available seats by more than 50%. Local authorities approved the project without any further restrictions, and within two weeks, the 54-year-old North Stand had been demolished, whilst a new stand that could hold up to 18,000 people was swiftly constructed.

Within an hour of the match, the visiting fans had already begun to voice their concerns about the makeshift stadium’s foundations, comparing it to that of a rocking boat. Engineers worked against the clock to tighten bolts, stabilize the base, and repair any last-minute defects that were ignored by the local safety commission, whilst the stadium announcer beseeched the fans to not move around so as to not put pressure on the shaky bedrock.

With 10 minutes remaining before kick-off, the upper part of the stand came crashing down to Earth, killing 18 people and leaving 2,300 injured. The desperate fans crowded around the Stade Armand Cesari in search of rescue helicopters and medical treatment, the local airport resembling a field hospital. For the first time since its creation in 1917, the Coupe de France trophy was not awarded to any team that season.

A subsequent trial revealed that Bastia officials had breached standard safety procedures and had planned to pocket the extra revenue from the increased ticket prices, which went unreported to the French Football Federation. Eight people were convicted with prison sentences ranging up to two years; meanwhile, Bastia president Jean-François Filippi was shot dead outside his home two days before the trial.

In Europe, Marseille had reached their lowest ebb in the Tapie reign. After eliminating Union Luxembourg in the first round, Marseille got off to a 3-0 lead in the first leg of their fixture against Sparta Prague via an early goal from Waddle and a second-half brace from Papin. However, after conceding two penalties in the final half-hour, Marseille headed to Czechoslovakia with a slim one-goal margin.

36 minutes into the return leg, Martin Frýdek put the hosts ahead on away goals with a thumping volley into the bottom left corner. Sparta Prague doubled their lead when Horst Siegl fired a thunderbolt of a shot past Pascal Olmeta, and a late consolation goal from Pelé did little to soothe the fans’ dismay. Humiliated by an opponent with a fraction of their budget, Tapie realized that he needed to win the competition by whatever means necessary.

The summer of 1992 brought plenty of turnover and turmoil to the Mediterranean coastal city. After a three-year stint in France, Waddle was offloaded to Sheffield Wednesday, whilst Papin joined Milan for a world record fee of £10 million. Fabian Barthez and Marcel Desailly joined from Toulouse and Nantes to provide fresh, young blood, whilst Rudi Völler arrived from Roma to replace the departing Papin.

Meanwhile, six weeks after accepting a Cabinet position from President François Mitterrand, Tapie was forced to resign due to embezzlement charges. Tapie had owned 50% of Nippon Audio Video System, the sole importer of Toshiba products in France, whilst his business partner Georges Tranchant owned the other half. After the two had arranged to sell the importation rights to Toshiba for $330,00 apiece, Tapie secretly negotiated a favorable fee with Toshiba and pocketed $2.4 million from the deal.

As Tapie’s fledgling political career hung in the balance, Marseille found themselves at risk of relinquishing the league title to a resurgent Paris Saint-Germain side. Les Parisiens were on the verge of bankruptcy in 1991, but after being purchased by French TV channel Canal +, they had managed to assemble a star-studded cast featuring the likes of George Weah, David Ginola, and Paul Le Guen. Tapie has claimed that he convinced the network to purchase PSG in order to foster competition, a claim that has been denied by former Canal+ director Charles Biétry.

Jean Fernandez had taken over the reins as manager in the summer, but after successive draws to Sochaux and Montpellier left Marseille trailing PSG in the title race, he was given his marching orders. For the third time in as many seasons, Tapie turned to his trusted Belgian technician, who had earned the moniker ‘Raymond la Science’ for his ability to adapt his tactics to counteract the deadliest of opposition. With Goethals at the helm, Marseille returned to their brutal, dazzling best, winning 11 of 14 league matches and narrowing the gap on PSG. A 2-0 victory at Saint-Étienne put Marseille firmly in the driver’s seat of the title race with just eight matchdays remaining in the 1992/93 season.