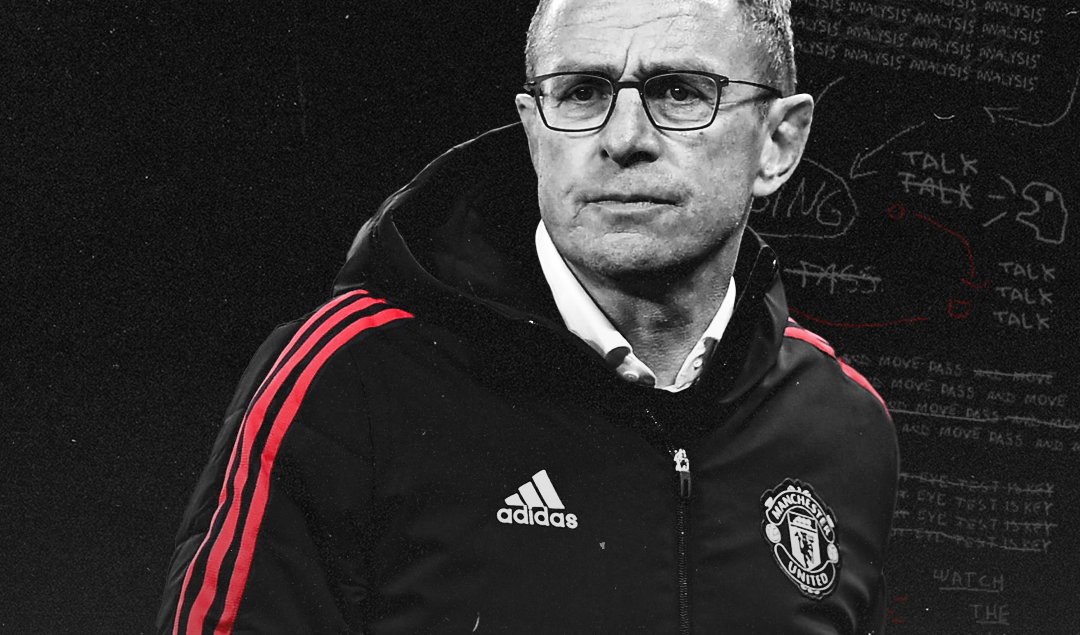 The Ralf Rangnick revolution has begun at Old Trafford. Sunday’s 1-0 victory over Crystal Palace provided the German with the perfect start to life with the Red Devils. Having only had 45 minutes of on-the-pitch training time with the team, it was impressive to see just how structured United were.

Deploying a 4-2-2-2 system for the majority of the game, United looked like a much more cohesive side, capable of winning the ball back high up the pitch, while remaining defensively solid.

There is a reason why Rangnick is known as ‘The Father of Gegenpress”. His philosophy of high-intensity, heavy-metal football has inspired the likes of Thomas Tuchel, Jurgen Klopp and Julian Nagelsmann. This style of play has been adopted by the game’s elite and is used by nearly all of Europe’s top sides.

Who Is Ralf Rangnick and What Does He Bring to Milan?

Looking at this Manchester United squad, it is clear that there is something of a divide. Some players appear to fit perfectly into Rangnick’s system, while with others, it is difficult to see how they will adapt. How Rangnick deals with the following players will ultimately determine the level of success he achieves in Manchester.

Let’s begin with the elephant in the room. Rangnick wants his striker to lead the press, harass the opposition backline and set the tone for the entire team. Of all the things that Cristiano Ronaldo is renowned for, defensive work rate isn’t one of them.

There has been a suggestion amongst pundits and journalists that Ronaldo is the main reason for United’s abysmal start to the season. His apparent lack of work rate results in United carrying him, defending with just ten players as opposed to eleven.

It is interesting to note here, that United have had two relatively successful seasons in 19/20 and 20/21, with Anthony Martial, a player who does as little if not less defensive work than Ronaldo, leading the line on most occasions.

On the flip side of this argument, Ronaldo has scored 12 goals in 16 games, has been responsible for all of the points Manchester United have accrued in the Champions League and has gotten United out of jail a number of times already this season. It is a genuine question to ask what kind of shape United would be in this season, if not for Ronaldo’s goals.

The argument that a team cannot be successful while carrying one player defensively is a convincing argument, yet, it is not an absolute rule. Chelsea look set for a major title charge this season, and while they do indeed press high up the pitch, Romelu Lukaku isn’t exactly what you would call the most natural defensive-minded forward.

West Ham have picked up from where they left off last season while deploying a more passive, counter-attacking style akin to what was commonplace in the league a decade ago. A throwback in many respects, The Hammers have beaten United, Manchester City, Chelsea, Liverpool and Spurs already this season.

Ronaldo is still one of the most intelligent players in the game. Deadly in the box, the man is guaranteed to score lots of goals this season. He is also a more complete player than most give him credit for. His touch is still excellent, he still has an eye for a pass and his aerial ability is unparalleled. Ronaldo may not be the player he once was, but he surely still has enough ability to play a key role in this United team.

Since Ole Gunnar Solskjaer’s dismissal, Jadon Sancho has experienced a remarkable uptick in form. Scoring his first two goals for the club, Sancho looks much more like the player that linked up to devastating effect with Erling Haaland at Borussia Dortmund last season.

After a near two-year saga, Sancho finally joined United in the summer of 2021. Under Solskjaer, Sancho often found himself either playing on the left side of midfield or sitting next to Solskjaer on the bench. In the few games in which Sancho has played in his favoured right winger position since Solskjaer left, his performance level has improved massively.

Ralf Rangnick at Schalke: The History and the Future

Sancho seems set to benefit hugely from Rangnick’s coaching. A common misconception that many United fans had of Sancho was that he was a speedy, tricky, individualistic player almost in the mould of a right-footed Ryan Giggs or Leroy Sané.

However, at Dortmund, Sancho played in a team that had a highly regimented style of football imposed upon them. Sancho benefitted from being part of a system in which each and every single player knew what was expected of himself and his teammates.

While starting the game against Palace on the left side of a 4-2-2-2, his future most likely lies on the right side of midfield. Once Rangnick starts to impose his philosophy on the team and continues to add some much-needed structure to the side, the Englishman should evolve into one of United’s most important players.

The Brazilian midfielder is a player that splits opinions. Since arriving during José Mourinho’s final season at the club, Fred has gone from being a bit-part player to starting almost every game for United.

Oftentimes, Fred can be frustrating. His looseness in possession and the lack of care he puts into his passes can often result in attacks needlessly breaking down. His temperament has also been called into question. The midfielder always plays the game on the edge and is no stranger to accruing yellow cards. His meltdown against PSG in the Champions League last year shows that he has a red card in his locker as well.

There is no denying, however, that Fred does some things very well. On top form, Fred is as tenacious as they come in the middle of the park. His recent man-of-the-match performances against Villareal, Chelsea and Arsenal, along with his game-winning strike against Palace, proves that Fred has a lot to offer to this team.

When questions were being asked of United’s work rate in the latter days of Solskjaer’s reign, one man whose effort could not be called into question was the Brazilian. Fred seems tailor-made for a position in a high-pressing team.

Fred’s energy and dogged determination will surely see him play a major role in Rangnick’s plans. The Brazilian’s attacking play has also improved significantly. With two goals and one assist in the Premier League this season, Fred has doubled his total Premier League goal-scoring tally in the past twelve games.

While these numbers still are not great, they do represent a massive improvement. And as shown by his wonderful strike against Palace on Sunday, Fred is likely to continue to improve in this department.

Since starring for England on their journey to the final of Euro 2020, the United skipper has suffered from a massive loss of form. Maguire’s performances against Liverpool, City and Leicester point to a player completely devoid of confidence. At his best, Maguire can be a commanding player, similar to an old-fashioned centre half.

When he’s playing well, Maguire is well capable of stepping into midfield and spraying 40-yard passes. At his worst, he looks slow, unbalanced, and for some reason, he inexplicably ends up tackling Luke Shaw.

While much of the blame for United’s inability out of possession has fallen at the feet of Ronaldo, Maguire and United’s defenders must take their fair share of responsibility.

When Liverpool or Chelsea lose possession, their forwards pressurize their opponents, while defenders such as Antonio Rudiger and Virgil Van Dijk move towards the ball, squeeze the space and trap their opponents. Harry Maguire does the opposite.

When United’s forwards try to press, Maguire drops deep to protect himself from speedy strikers and quite often ends up playing opposition attackers onside. Additionally, this leaves an ocean of space for United’s midfielders to cover, which is why Fred and Scott McTominay quite often appear completely over-run.

Rangnick wants his central defenders to behave like Rudiger and Van Dijk do. Unless Maguire buys into Rangnick’s style, it is hard to see a place for the skipper in the side.

The right-back has suffered massively in his third season at the club. During his first two seasons, Wan-Bissaka earned plaudits as one of the best one-on-one defenders in the league. His memorable battles with Raheem Sterling in multiple Manchester Derbies suggested United’s right-back issues that had plagued the side for years since Gary Neville’s retirement were finally at an end.

Similarly to Maguire, Wan-Bissaka’s drop-off in form has been sharp and alarming. His season started poorly with a red card away to Young Boys on matchday one in the Champions League, with his form never recovering to the heights reached in the previous two seasons.

The former Crystal Palace defender’s attacking ability has always been called into question. The full-back doesn’t possess the technical ability of a Reece James or a Trent Alexander-Arnold. As a result, teams facing United often allow Wan-Bissaka to be an ‘out’ ball, with many moves breaking down on United’s right-hand side.

Wan-Bissaka watched Rangnick’s first game in charge from the bench at Old Trafford on Sunday, with Diogo Dalot starting in his place. The Portuguese full-back seems set to be given a run of games to prove his worth to Rangnick.

If Dalot, who has always had lots of ability going forward, continues to improve on the defensive side of his game, Wan-Bissaka may find it difficult to force his way back into the side.

Having stopped the rot by winning three and drawing one in their last four, a relatively simple fixture list gives Rangnick a chance to hit the ground running and get some wins on the board. Qualification to the next round of the Champions League coupled with the upturn in league form has at least ensured that United’s season isn’t a total write-off before the festive season even begins.

While Sunday’s victory over Palace should give United fans some reasons to be optimistic for the future, much more work still needs to be done to get United on course to compete with the likes of Chelsea, Manchester City and Liverpool.

With sterner tests to come in the weeks and months ahead, it remains to be seen whether ‘The Professor’ can bestow some wisdom upon his new pupils.