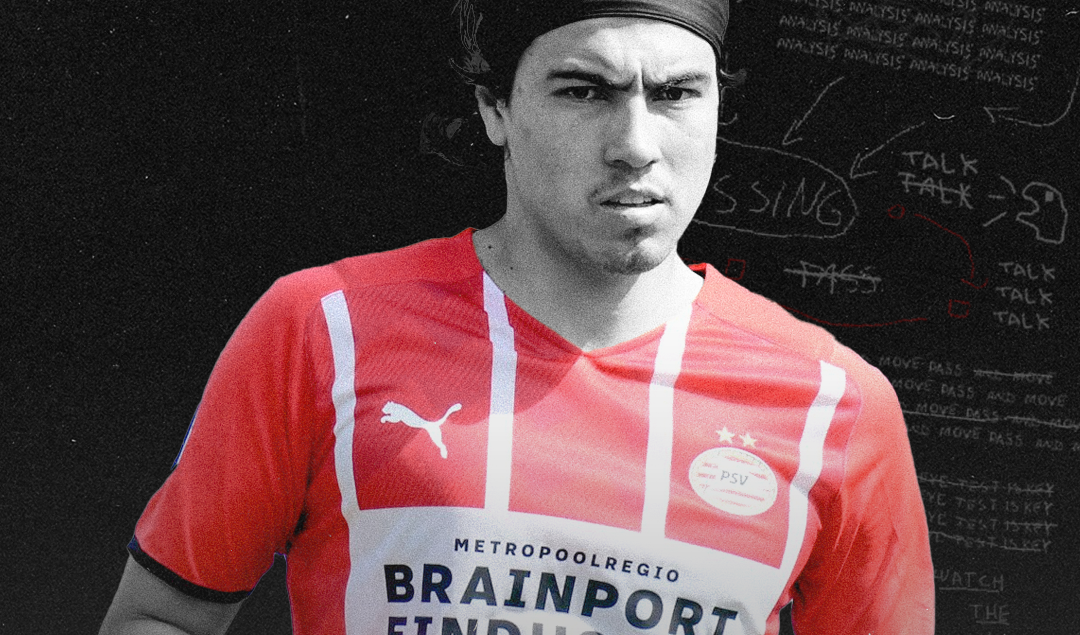 If PSV fans could have written off players before the start of the 2021/22 season, then Erick Gutierrez would have been almost undoubtedly on the top of that list. Somehow, ‘Guti’ has fought himself back into the starting eleven of PSV and was one of the most surprising and most reliable players throughout the latest season. And it seems like Roger Schmidt, who is officially leaving PSV for Benfica this summer, is eager to bring the Mexican with him.

Gutierrez was signed in 2018 for €6 million euros from Mexican side Pachuca. At PSV, Gutierrez was most likely signed just to keep Hirving Lozano at the club, but the great performances from the rightwinger helped Lozano secure a deal to Napoli in the summer of 2019.

But the previous 2018/19 season started off great, for both Guti and ‘Chucky’ Lozano. A 0-7 win against ADO Den Haag away from home, with Gutierrez playing 20 minutes and opening his goal counter at PSV as well as giving an assist to his Mexican teammate surprised many people positively.

Who is Lozano’s best friend (which was clear to see in one of the goal celebration) and can he be another successful Mexican player at PSV after Carlos Salcido, Hector Moreno and Andres Guardado?

Lozano moved for a huge fee to the Serie A in the summer of 2019, leaving Gutierrez as the only Mexican player left in the squad. But that didn’t seem to do Gutierrez much, as he was still a guarantee in the starting eleven for the first half of the 2019/20 season.

But just 3 wins in the last 12 Eredivisie matches saw the sacking of Mark van Bommel quite early into the second half of the season. Key players such as Donyell Malen and Steven Bergwijn got injured for longer periods of time, and Mohamed Ihattaren couldn’t fulfil his potential and fill up the spaces just yet.

The second half of the season didn’t see much of Gutierrez, in which the Eredivisie was stopped early due to the Coronavirus outbreak. Gutierrez ended with having played 26 matches in this season, scoring just 1 goal and giving 1 assist.

A new manager in Roger Schmidt was signed to get the club back to the top of the Eredivisie. Unfortunately for Gutierrez, he got an injury which left him out for the entirety of the first half of the 2020/21 season.

Feyenoord: A Club Saved by Its Youth Academy

He then played 10 games, most as a substitute, not getting on the goals or assists sheets. His season ended early in April, as Gutierrez got another injury which ruled him out for the rest of the season.

With just 1 game played in the first 9 Eredivisie matches didn’t give Guti much hope for the rest of the season, and many fans didn’t expect much of him anymore.

Guti was one of the players who was a part of the squad that finished in a hugely disappointing 5th place in the 2019/20 and he didn’t have many rememberable moments since his arrival anyways, apart from his debut where he scored a goal and gave an assist to Lozano. The stigma around him wasn’t overwhelmingly positive.

From November onwards, Guti became a guarantee in the starting eleven of Schmidt, who was still looking for the perfect tactic and squad that combines the two. The first loss since Gutierrez was a starter for PSV in the latest season didn’t came until the end of January, where they lost to Ajax 2-1.

Since the 22nd Eredivisie match round, PSV haven’t lost another match in the league and actually only lost twice since Gutierrez’s revival this season. Some might see Guti as a shadow, or an understudy, to Ibrahim Sangaré, who was one of the best players for PSV in this season, but Gutierrez has proven that he’s a very capable player in itself.

Playing alongside Sangaré makes up for a great mix, with the Ivorian defensive midfielder having the height and strength as his main attributes, with Gutierrez having better positioning and better defensive attributes.

A KNVB-Beker final against Ajax really showed the Netherlands that both players are capable of stopping a midfield of Edson Alvarez, Ryan Gravenberch and Davy Klaassen. Sangaré got voted as the man of the match, but for me personally, I thought Gutierrez deserved it more.

Aggression, hard but fair tackles and a real drive in power was definitely something that PSV was lacking for a longer period of time. And he also scored the very important equalizer in the cup final as well. The now 26-year-old has genuinely turned from an almost forgotten player at PSV, to one of the fan favourites.

Almost everyone was convinced at the start of the season that he would leave the club sometime soon for a very low fee, but many fans hope Gutierrez is extending his contract (his contract ends in 2023) and that he can be a reliable player under Ruud van Nistelrooij, who is the new manager of PSV in the 2022/23 season.

However, there are ther fans also say that we should sell him as we could actually still get a decent fee for him. Especially after the good season Gutierrez has had, there is definitely interest in the central midfielder.

Roger Schmidt seems keen on bringing Gutierrez with him to Benfica. I’m not going to compare the two teams, or either league’s quality, but another level higher might be a bit dangerous for Gutierrez, who is now 26 years old too of course.

There might have been a small rumour of a German, English or Spanish adventure on the horizon for Guti, but it seems like Benfica is his next destination and both PSV and Benfica could agree on a deal very soon. PSV is of course looking to start off fresh under Van Nistelrooy, with Guti being just one of many players who are rumoured to leave the club this summer.

Benfica want to help Roger Schmidt to get his squad sorted out for the upcoming season, with Gutierrez and possibly even Sangaré (will be too expensive however), Götze and even Mauro Junior going down the same route.

All in all, Gutierrez started off well at PSV, together with fellow Mexican compatriot Lozano. However, a run of bad form, a manager chance, a few injuries, somehow still getting a chance and taking that one last grasp of having the possibility to make his period at PSV somewhat successful, makes Gutierrez one of the revivals of the season, not just at PSV, or in the Eredivisie, but in the entirety of Europe.

He might not be the star player of a team, but he is a solid, reliable, tirelessly-working midfielder, who can be a great partner to a bigger and stronger defensive-minded player alongside him.