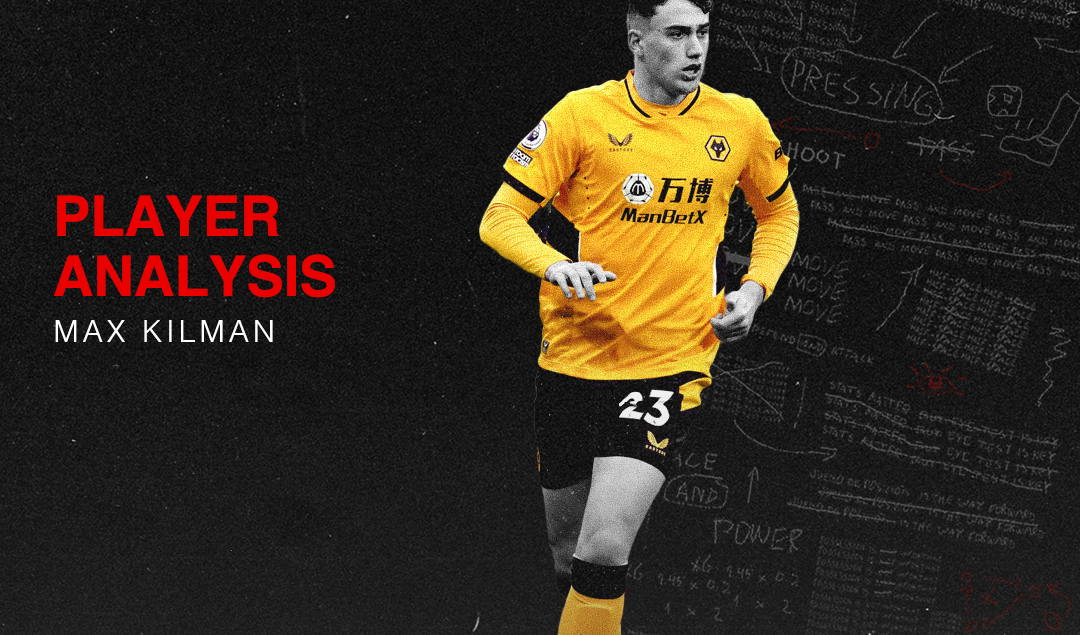 England has always produced centre-backs who look like Max Kilman. He’s 6-foot-4, capable in the air, and is more than happy to engage in physical contests.

From a distance, he bears similarities to someone like Craig Dawson, the archetypal ‘head it, punt it, tackle it’ defender who defined the nation’s approach for a generation.

That isn’t, however, an honest or realistic assessment of Kilman’s style, talent, or history. In fact, he represents the antithesis of the caricature that English football became in the 1990s and 2000s.

The 24-year-old, in the middle of a breakout season with Wolves, is a left-footed centre-back who relishes playing on the right of a back three, blocks shots like it’s going out of fashion, and can drive play from the defensive third.

Also of note, Kilman is more of a thinker than a doer. He reads the game impeccably and has excelled under Bruno Lage’s direction at Molineux.

The tactical demands placed on his shoulders haven’t fazed him – including tasks that still challenge the Chelsea-born defender.

“I’m really enjoying working under him,” Kilman said of Lage. “I think it shows with everyone else in the team. Everyone has been enjoying the influence the coaching staff have and you can see this season, we’ve been playing well and dominating possession in certain games and defending really well.

“We are using the centre-backs more to carry out the ball and break lines. We’re being a bit more aggressive defensively, for example playing a higher line. There have been a few changes from last season, but we’re all learning and all getting better.”

One of the assignments Kilman sometimes struggles with is picking the right moments to advance possession, though he still ranks in the top quarter of big five league centre-backs for progressive carries per 90.

Although Kilman has the technical ability to make plays, he isn’t always willing to take the risks in possession that Wolves’ system requires. As a result, Lage has been proactive in encouraging the former Maidenhead United centre-back to trust his instincts when the ball is under his control.

“He has done that since the first game against Leicester,” Lage told The Athletic earlier this season.

“Without pressure, he runs to the opponents’ box. When we have the ball, he knows what we need to do, but after that, it’s your decision. He wants to take risks and I’m happy with that. I want players with the personality to take some risks, especially the guys at the back.

“It’s a process. He knows he didn’t perform well against Brentford, he made two or three decisions that weren’t so good, but when you look back, he’s there.

“When I see he’s there offensively and defensively, top players do this. In attack and defence. Not about the names, it’s about performances.”

And Kilman has performed this term, exceptionally so.

Since breaking into Wolves’ starting line-up at the start of the campaign, he’s made 26 appearances in the Premier League – all of them full 90s. In that time, he’s scored once, picked up three yellow cards, and has started to play a more significant role in his team’s attacking play.

The 24-year-old’s growing confidence shows up in the numbers and matches the eye test. Kilman is an active part of Wolves’ approach in and out of possession, with his final third touches per 90 rising from 2.6 to 3.7 over the last season.

As Lage notes, Kilman is willing to charge upfield when the opportunity arises, combining his technical and physical attributes to make an impact on the transition.

This season alone, he’s completed 23 carries into the final third, just shy of one per game, twice the rate of last season.

Although Kilman spent much of his junior career in professional academies, first with Fulham; then Gillingham, his technical prowess was forged in futsal – where the ball is heavier, the pitch smaller, and the play faster.

Thanks to this experience, Kilman is sharp in possession and often uses his delicate first touch to separate himself from onrushing pressers.

Moreover, his passing is almost always deliberate – very rarely does the Wolves defender launch the ball aimlessly, allowing Wolves to tighten their grip on the balance of play.

He’s also become a more accurate distributor since making his Premier League bow in 2019-20. His career average pass completion rate is 87%, with the bulk of his improvement relating to long passes (30+ yards).

In other words, Kilman is nothing like the archetypal English centre-back when in possession. He’s confident with the ball at his feet, comfortable playing on the wrong side, and is technically impressive. But what about when he’s asked to defend?

Well, he’s more than held his own – defending with the kind of assuredness befitting of an older, more experienced player.

He reads the game well, deploying his tactical understanding to track and forecast his opponents’ movement.

Moreover, Kilman’s defensive judgement is sound. Although he lacks acceleration, the 24-year-old has made numerous key recovery runs for the Wolves this season – often because he is first to identify and respond to dangerous attacks.

In one-v-one situations, Kilman’s size can make life difficult for opposition forwards. However, when he’s unable to control the gap between himself and the attacker, his slowness of the mark can cause problems.

In Wolves’ 1-0 defeat to West Ham at the end of February, Kilman struggled to contain Michail Antonio – a player of a similar stature – in individual battles.

Ultimately, Antonio’s explosiveness off the mark was the difference-maker, allowing the West Ham forward to separate himself from Kilman’s defensive efforts.

In other words, Kilman is vulnerable in one-v-one situations when his opponent can accelerate rapidly enough to nullify the advantages that come with being a 6-foot-4 centre-back in a physically demanding league.

The same, however, could be said of most big five league defenders – and Kilman can partially paper over the cracks by using his tactical and spatial awareness to nip dangerous attacks in the bud.

To conclude, there’s also a broader point to be made about Wolves’ success under Lage and their standing in the Premier League.

As February ticks over into March, Wolves are in the chase for European football despite playing incredibly low-event football while relying on a hot goalkeeper.

Furthermore, Jose Sa – in his debut Premier League season – has performed at an astonishing level. The Portuguese shot-stopper has thwarted 9.4 goals above expected, plus Wolves lead the league in save percentage on the season (83.7%).

To put it bluntly, there’s a significant chance Wolves will regress to the mean during the second half of the season. Their current level of performance is unsustainable; they will only outrun maths for so long.

With that in mind, it’s important to acknowledge the big picture when evaluating Kilman’s individual quality. The 24-year-old is a remarkable centre-back, one who forecasts as a promising Premier League talent, but he isn’t as infallible as his team’s current record suggests.