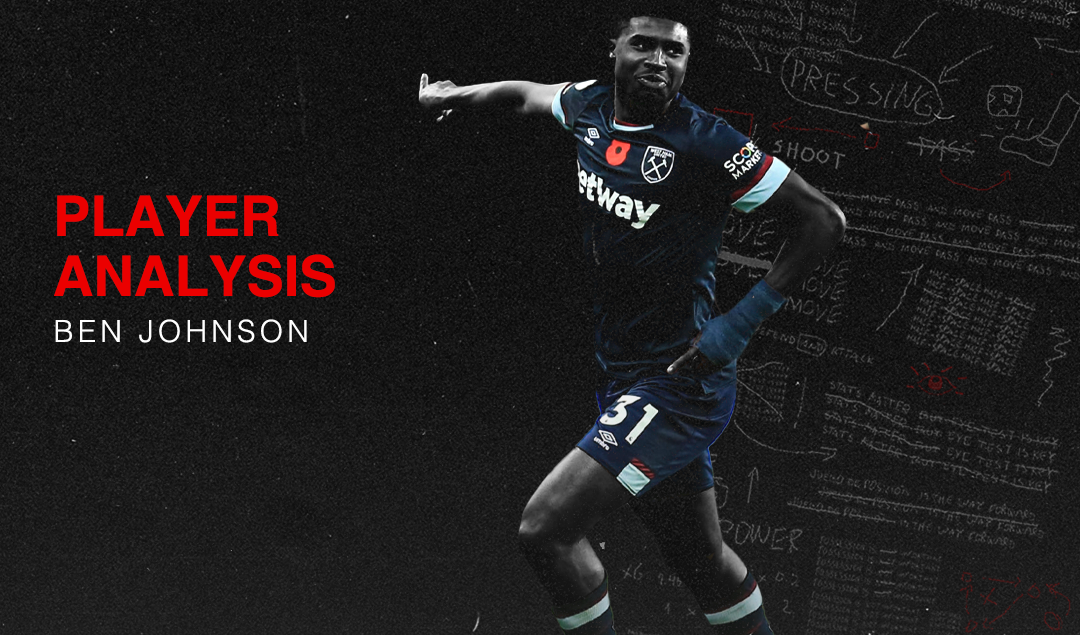 When talking about West Ham’s latest “wonderkid”, pundits tend to fall into the same predictable patterns. They’ll point to the Hammers as the ‘academy of football’, draw a cheeky comparison to Frank Lampard, and finish up by suggesting that East London is somehow football’s true spiritual home.

I promise not to do any of those things when analysing the emergence of Ben Johnson, a 21-year-old who is in danger of outgrowing his hot prospect tag under the tutelage of David Moyes.

Johnson’s Story: Utility to Ever Presence

Johnson’s rise to Premier League semi-stardom has been rapid. When he signed his first professional deal with the Hammers, then academy director Terry Westley said the defender would be “somebody who surprises a lot of people.” He wasn’t wrong; since making his Premier League debut aged 19, Johnson has developed immensely – in both talent and potential.

Johnson’s first senior appearance came in a 1-0 away defeat against Manchester City under Manuel Pellegrini. On that day, he didn’t have the look of an academy graduate. He was yet to fill out his frame and played with extraordinary caution in possession. Regardless, he won his individual battle against Riyad Mahrez, who – in the words of the BBC – “was frequently disappointing” versus his teenage counterpart.

The Essex-born full-back has made 22 league appearances since then, including four starts this season, in which he has played on both sides of the defence. And in some respects, Johnson’s versatility – although a much-lauded trait – may have held him back.

Vladimír Coufal: The Bargain of the Summer?

Seen as an understudy to Aaron Cresswell on the left and third in command behind Vladimir Coufal and Ryan Fredericks on his natural right-hand side, Johnson – until recently – struggled to pin down a place in Moyes’ plans. However, since coming into the West Ham line-up following an injury to Coufal, that no longer seems to be an issue for the 21-year-old.

Johnson has started each of West Ham’s last four Premier League fixtures, a run of back-to-back-to-back-to-back wins over Everton, Tottenham, Aston Villa, and Liverpool. Like many of his admirers, the Englishman attributes his recent form to Moyes’ faith and guidance.

“You could say that,” Johnson said following victory at Villa Park. “To be fair, it’s testament to the manager to be honest. When I’ve been out of the team, he’s always prepared me as if I am playing. Of course, I’m playing under Vlad and Ryan on the right and obviously Cress on the left, working with them and seeing what they do well is something that’s helped me a lot.”

There is also an element of good timing to Johnson’s tale. His opportunity to step into the line-up arrived just as he made significant improvements to his game, as evidenced by his weak-footed strike against Aston Villa.

“It’s all about confidence,” Johnson said of his second Premier League goal. “There are times when I get the ball out wide and my opponent is there and although I want to cross it with my right, sometimes I don’t think it and I’ve got a left foot I can use and I can cut in and add a different dimension. The space opened up and I just wanted to place it and thankfully it was pacey enough and it beat the ‘keeper.”

Before we assess Johnson’s individual characteristics, it’s worth placing him in context. The 21-year-old is a right-footed full-back who can play on either side of the pitch, though right-back is his natural position.

Under Moyes’ system (a counterattack-minded, low line of engagement-styled 4-2-3-1), Johnson is expected to complete two main assignments: win his 1-v-1 battle against the opposite winger and not turn the ball over in transition.

Johnson is not a major player in West Ham’s attack for two structural reasons:

With Johnson’s diminished offensive responsibility in mind, let’s assess the gaps in his game.

As expected, Johnson’s contributions in the final third have been limited thus far. He’s yet to provide an assist in the Premier League and has just two goals to his name. Obviously, though, there is more to football than scoring/assisting goals, especially for full-backs.

In addition to his relative inactivity in the final third, Johnson’s pass success rate is concerningly low. With a completion rate of 71.2%, the 21-year-old falls in the 12th percentile for players of his position. By contrast, Cresswell ranks in the 37th percentile while Coufal sits in the 10th.

To date, Johnson has not excelled offensively and offers relatively little in the final third as a result. However, that isn’t to say that he won’t offer more in the future. He is technically impressive, is confident using his weaker foot, and is shown to be a clean striker of the ball. Take his goal against Aston Villa as an example:

What a start for West Ham! ⚒

Ben Johnson puts the visitors ahead with a lovely left-foot finish! 🎯#AVLWHU pic.twitter.com/5aB3Nor8xM

Johnson – albeit slightly clunkily – brings a lofted pass under control, drives into the penalty area, cuts inside, and hits a curling shot (with his weak foot) past Emiliano Martinez. It was a goal befitting of an elite forward, not a defence-first full-back. Bare that mind.

Now, let’s look at Johnson’s strengths. He is a fantastic defender, especially for a player of his age and level of experience (remember, he hasn’t been sent out on loan).

Although he ranks in the top half of big five league full-backs for tackles, blocks, and clearances, Johnson’s biggest asset is his ability to read the game. He is in the 95th percentile for players of his position for interceptions, averaging 2.29 per 90. In other words, he knows when to pinch in to cut the passing lanes and does so effectively.

And it tallies with the eye test. Johnson has looked comfortable in West Ham’s backline because he is well-suited to Moyes’ system, a system that relies on the dynamism of a defensive-minded right-back to clean up dangerous situations on the transition.

In summary, Johnson is a very good defensive prospect who has the technical capacity to make significant improvements to the offensive side of his game.