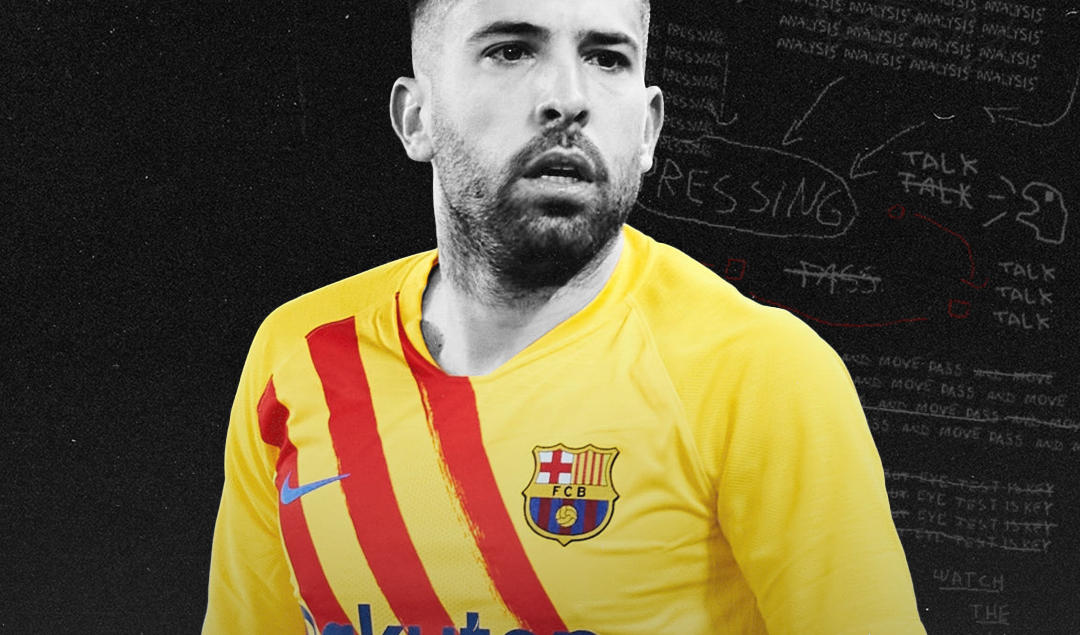 Barcelona’s season has started poorly, and the Catalan club has yet to overcome the absence of Lionel Messi in every aspect of their performance. After Ronald Koeman was fired in the middle of the season and Xavi was named as the new manager, the situation didn’t change much.

The Blaugrana has already been eliminated from the UEFA Champions League, has been eliminated in the Copa del Rey Round of 16 to Athletic Bilbao, although they have finally been able to break into the top four after beating Atlético Madrid on Sunday. In the UEFA Europa League play-off, Barcelona will face Luciano Spalletti’s Napoli.

After the departure of Messi, the biggest impact has been on the offensive play of Barcelona. Barcelona’s struggle in scoring this season is clear, and whilst the team’s scoring problems have improved since Xavi’s arrival, the team’s linkup play in the final third is still inadequate.

Many players’ performances have fallen dramatically since Messi’s departure from Barcelona. However, if there is a particular one, it would be Jordi Alba.

Alba looks completely useless on the field without Messi, a below-average player, and such statements are being used more frequently these days. But is Messi’s absence the only reason Alba’s form has dropped?

Today, we will try to explain the reasons behind the decline of Alba in the offensive phase and find out how the problem can be solved tactically. Alba’s bad form is more related to Barcelona’s current tactical setup rather than Messi’s absence.

There is no footballer who is both strong with the ball and left-footed at the same time; all midfielders and wingers are right-footed. Spreading the ball through the left side is difficult for a right-footed footballer.

Turning him around will take some time, and during that time, the opponent’s defenders will have many opportunities to read the direction of the ball. 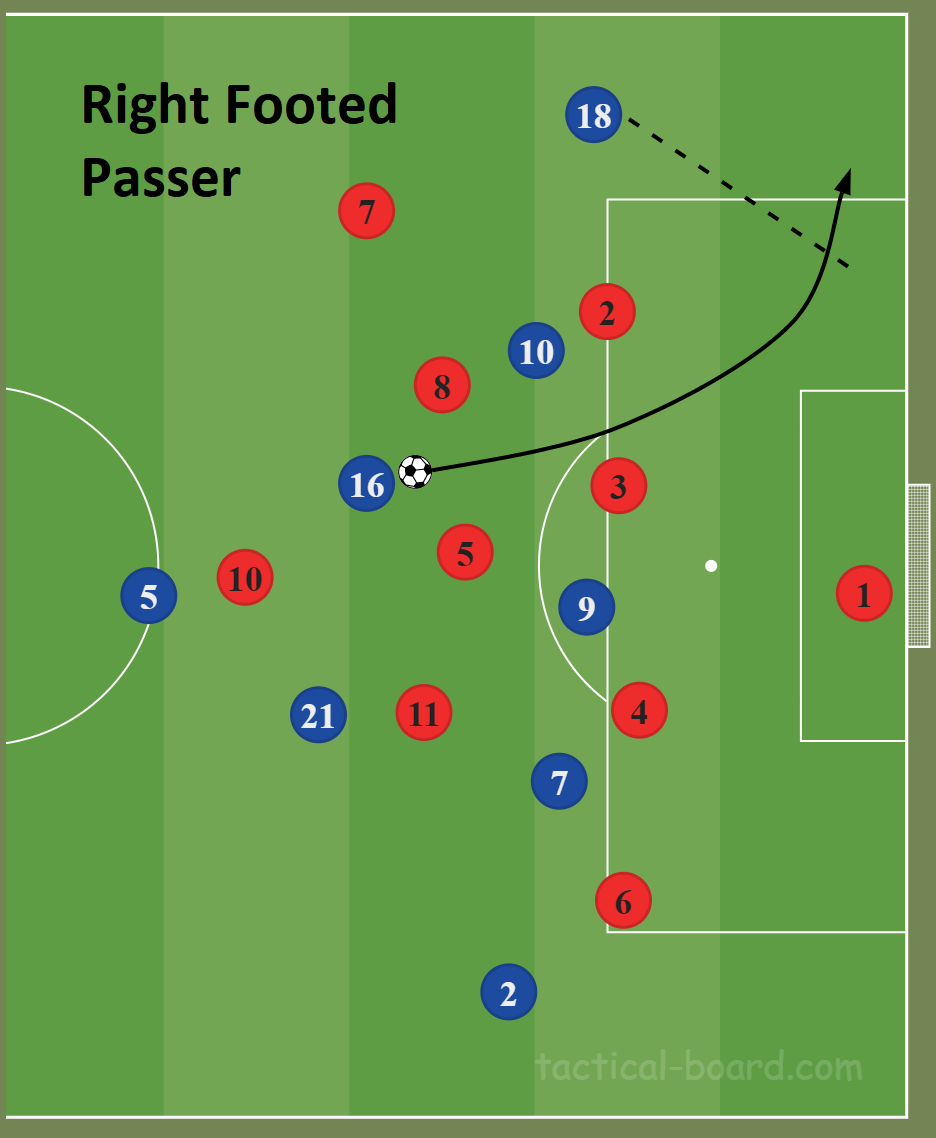 A bigger issue is that if a right-footed player makes a through pass from the central area to the left wing, the ball will go in a concave trajectory. Even if the player who receives the ball makes a run, his through run will be ineffective because the ball is traveling in a backward direction. 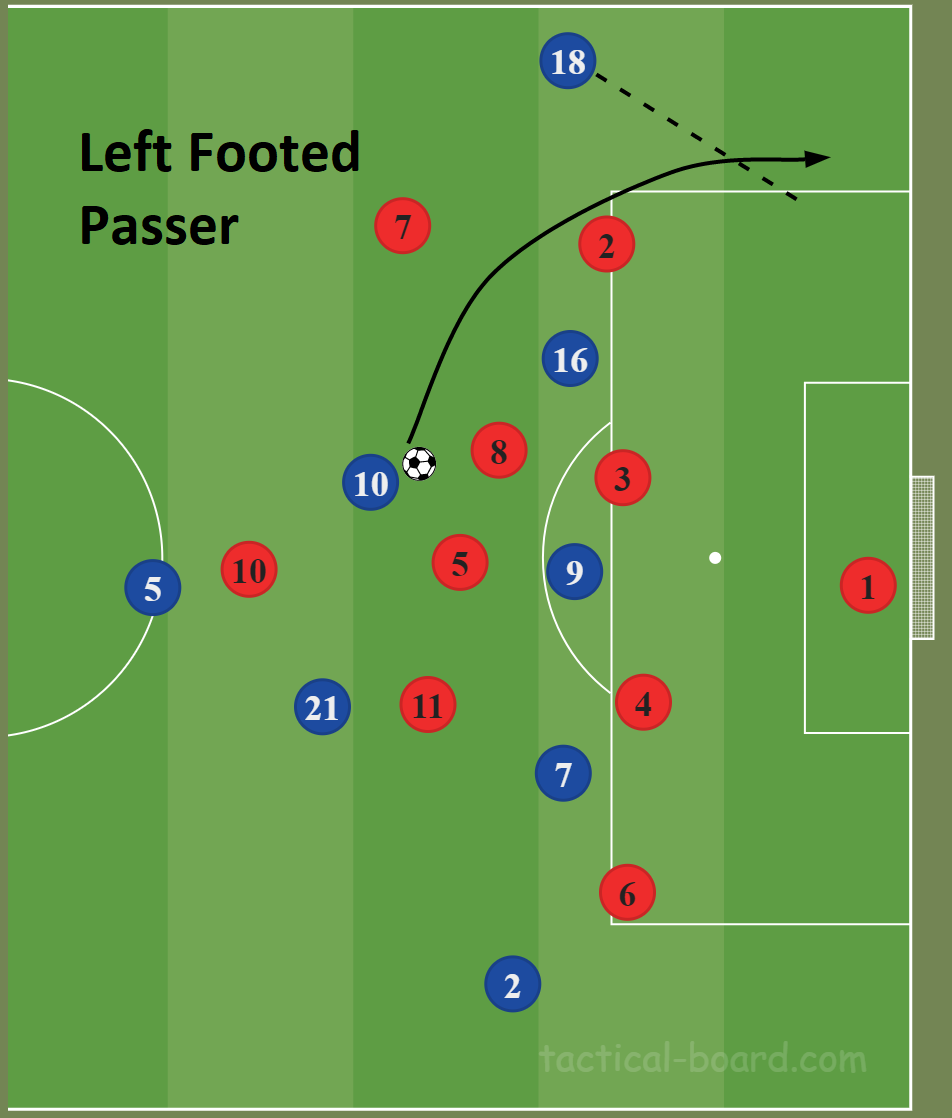 Furthermore, if a left-footed footballer passes from a similar position, his natural turn will not take any extra time. The ball’s trajectory will be convex this time. As the ball arrives a few feet ahead of the through run, there is a chance for the receiver to pass by receiving the ball while running. 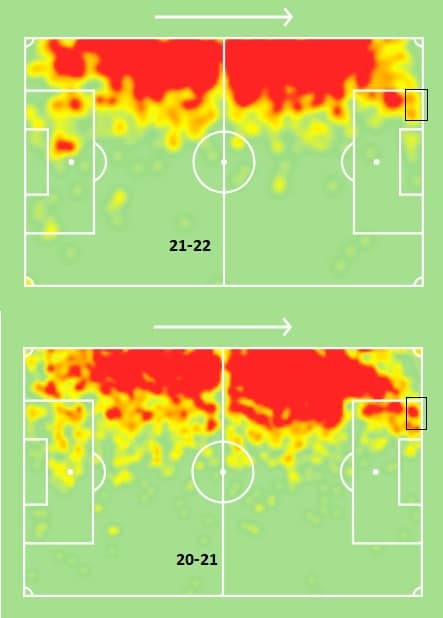 Looking at the area marked by the black rectangle, it can be seen that last season Alba intended to cut through this position a lot inside the box and attempted a low cross from there, with Messi as the leading supplier of the ball (Antoine Griezmann was the only left-footed forward in the forward line aside Messi, although was far from a creative playmaker).

This season, Alba’s presence in this position is almost non-existent. Due to the lack of a left-footed passer, the chances of getting the ball by cutting in this position have significantly decreased. Alba is more likely to move out of the box into the half-space area this season rather than take an overlapping run in the final third.

If we look at the diagram above, the rate of Alba’s passing or crossing from the touchline area in the left wing into the box is very low this season. Even though he overlaps through the left wing and makes a cutback run through the center, he doesn’t get enough ball supply.

This is why he has struggled the most to create a threat from this position, where Alba was the most feared. But what is the reason for reducing Alba’s effectiveness operating at the half-space?

The term “Inverted fullback” is very common in today’s football. In this case, the fullbacks come to the halfspace and operate as a false #8, instead of overlapping through the wing area like natural fullbacks. Xavi has been using Alba a lot in the false #8 role since he became Barcelona coach.

Alba’s inventiveness is mostly confined to his crossing. The inswinging cross from the half-space is more effective, but Alba can’t do it from the left half-space as he’s left-footed.

The directional change of the cross also reduces the efficiency of his outswinging crosses. That’s why Alba has crossed a lot this season, but his cross’s efficiency has decreased a lot.

Comparing this season with the previous one, it can be seen that Alba’s tendency to cross has increased due to Barcelona’s cross-dependent football this season, but the chances of a successful outcome from his crosses have greatly decreased.

We can specially mention two fullbacks who are operating in the half-spaces as an inverted fullbacks, João Cancelo of Manchester City and Trent Alexander-Arnold of Liverpool.

Although Cancelo plays in the left-back position under Pep Guardiola, he moves to the left half-spaces during the build-up and tries to create chances with a line breaking passes as the #8.

Jordi Alba doesn’t have that kind of ability like Cancelo to move to the central area of the pitch and operate as a playmaker.

Whilst Alexander-Arnold is right-footed, he often moves to the half-space and makes inswinging crossing attempts with his left foot, which is why the effectiveness of his cross is not diminished by operating in the right half-space.

Alba, on the other hand, isn’t very active on his weak right foot, which is why he hasn’t been seen attempting inswinging crosses using his right foot this season despite operating in the half-space. 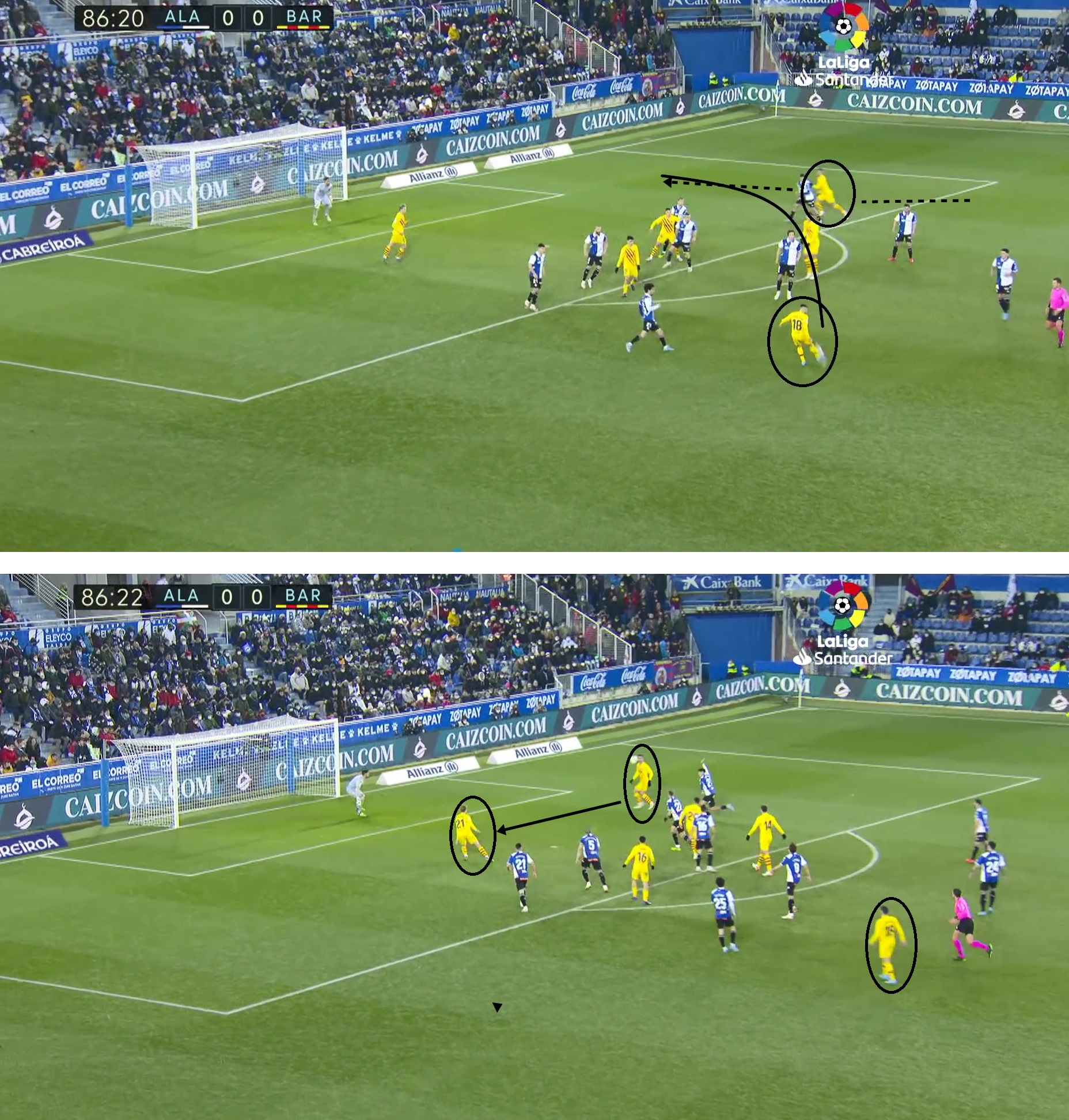 However, let’s take a look at the example above to understand how effective Alba’s right-footed inswinging cross from the left half-space can be.

Despite playing until the very last moment against Deportivo Alaves, Barcelona were unable to strengthen their goal difference enough to grab three points.

At that point, Nico González’s horizontal pass on the center pitch was received by Alba with his left foot, and Alba then attempted a quick inswinging cross with his right foot, which was aimed at Ferran Torres.

Alba’s cross sailed over the crowded Alaves defensive line, prompting Ferran to make a darting run into the box. Barcelona scored the game-winning goal when Ferran made a volleyed pass to Frenkie De Jong, who scored the goal.

Barcelona’s style has some major tactical faults. The lack of a left-footed player in the final third is one of the team’s main flaws.

Nothing unpredictable can be done to break the opponent’s line and create goal-scoring opportunities because no one from the midfield has recycled the ball to the left flank in front of the opponent’s tight defensive organization.

Barcelona’s forwards have struggled to find the net as everyone’s movement has become predictable for the opposition. In order to solve this issue, a left-footed player must be incorporated into the attack.

Otherwise, if Barcelona chooses to bring in another left back instead of Alba, he will be expected to suffer offensively in the final third.

Barcelona is almost likely to sign a new left back in the summer. In that instance, someone who can execute with both his left and right foot should be brought in.