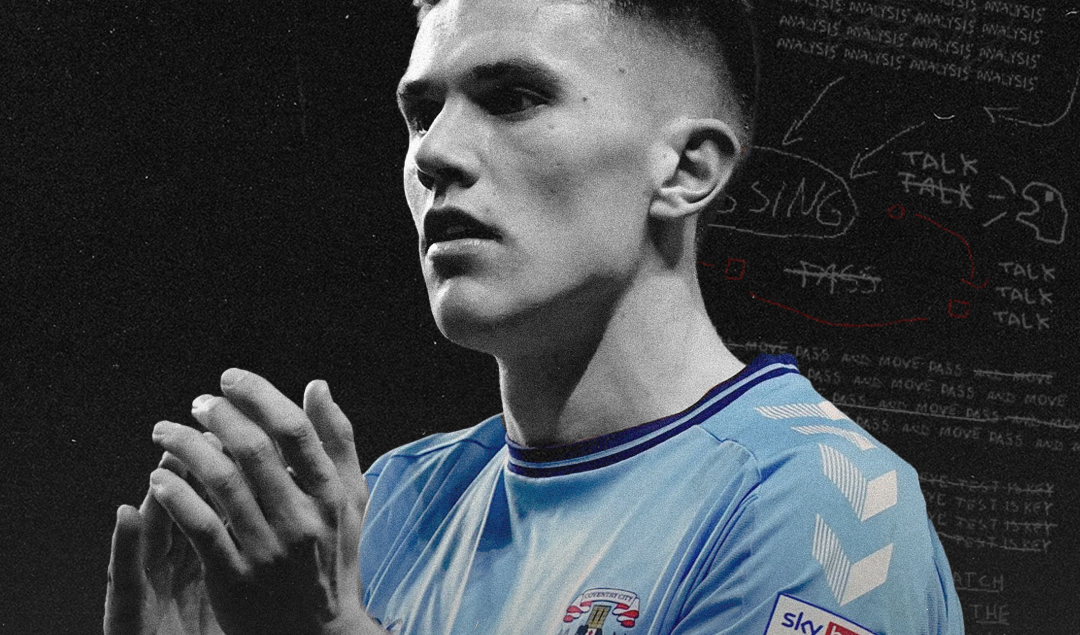 Coventry have been another surprise package in the Championship this season, a league renowned for favouring the underdog.

In and around the promotion spots for large spells of the season, the Sky Blues have unfortunately tailed off in recent weeks – it’s hard to constantly keep up those levels over an entire season, Mark Robins’ men comfortably mid-table at the time of writing.

A club that has fought back from the brink – issues with the Coventry Building Society Arena in recent years relocating Coventry to Birmingham and even Northampton at one stage alongside ownership issues – it’s been an exciting place this season for on the pitch matters.

The likes of Gustavo Hamer and Callum O’Hare have excelled through the middle this season, but in Viktor Gyokeres, the Swedish striker has been a revelation this Championship campaign.

Before poor form put an end to his blistering goal-heavy start, Coventry’s star striker scored nine goals in his first 11 games of the season – an unbelievable return for a striker who has found scoring hard to come by, goal-shy in the English game until this season.

In Coventry’s recent shock win at Fulham – Mark Robins’ men rocking up to Craven Cottage and leaving as 3-1 victors – Gyokeres reminded the masses of his true class with a strike in that surprise win.

Helped by poor goalkeeping in the end, the combination play before the strike between O’Hare and Gyokeres was worthy of the fortunate goal trickling in.

Coventry haven’t conceded a goal at the hands of Aleksandar Mitrovic in either game against The Cottagers, a rare feat in itself.

The Sky Blues will hope next season can be a more sustained push at the playoffs, praying that Viktor Gyokeres isn’t tempted by a move away and he can further solidify his importance up top for Robins’ men.

His breakthrough season – the season that initially caught the eye of Brighton – would come in 2017 with Gyokeres’ 13 goals helping his side lift the Superettan title and reach the top flight of Swedish football.

The Swede’s humble beginnings showcased a talented striker, a strong presence up top who could easily burst away from the defender trying to keep tabs on him.

A confident finish would often cap off a move, Brighton clearly impressed by the raw talent the Scandinavian attacker possessed.

His time at Brighton, however, wouldn’t go to plan – an odd few chances in the line-up came in less than important clashes in secondary Cup competitions, consistently loaned out as opposed to being an option within the first team set-up.

Only 23 years of age now, the youngster had to acclimatise to a number of new surroundings in such a short space of time. Next up, the opportunity to impress in Germany with St Pauli on loan.

The Swedish striker would manage seven goals in 28 appearances when making the switch to the 2 Bundesliga, a healthy return after little to no action with the Seagulls was afforded to him.

Another loan spell in the season after would see Gyokeres tested in English football in the Championship, joining Swansea City on a season-long loan.

However, after building up some confidence in Germany, a goal-shy loan spell with Swansea temporarily derailed any progress made since leaving his native Sweden behind.

A solitary strike in Swansea’s 2-0 win in the FA Cup over Stevenage would be his only goal for the Swans, a header finding the net on a fog-heavy day, before he was recalled back to his parent club Brighton.

He would then be loaned out again, a constant cycle of loans disheartening for Gyokeres. Yet, this loan would prove to be the final one – putting pen to paper on a permanent move to Coventry after netting three strikes towards the end of the 2020-21 season.

Putting the failure of his move to Brighton behind him, with a few underwhelming loan spells in-between, this season has seen Viktor Gyokeres at his very best.

Often up front on his own, with attacking playmaker Callum O’Hare behind him, he has been the main focal point up top this season for Mark Robins’ overachievers.

Mainly competing in League One in recent memory, this campaign has seen the Sky Blues flirt with the idea of the Championship playoffs – an unlikely return to the Premier League fading away unfortunately, Coventry not in the top flight since the beginning of the new millennium in 2000.

Viktor Gyokeres has been a man reborn this season, a confident and assured figure even after regularly firing blanks at Swansea prior to his Sky Blues transfer.

He opened his account for the season on the opening day, Callum O’Hare’s tricky run leading to a pinball in the box before Gyokeres rifled home past Brice Samba against Nottingham Forest.

The Swedish striker was crucial in Coventry’s surprise start to the campaign, scoring four goals in the first seven games of the season with Mark Robins’ men accumulating five wins along the way.

His strike in a 2-0 win over Middlesbrough showcased Coventry at their blistering best on the counter-attack, combining with his strike partner up top before rounding Joe Lumley in the Boro net to score.

Any concerns over Gyokeres’ previous goal-shy ways had been eradicated, another trademark counterattack goal against Cardiff winning the match courtesy of Coventry’s Swedish revelation.

He was the shock star of the Championship in the first few months, Mark Robins’ men even considering promotion as a possibility when Gyokeres and co dispatched Fulham 4-1 in early October.

However, the season has tailed off for Coventry. Unfortunately, Gyokeres’ ruthless opening few months to the campaign couldn’t quite be matched over a full Championship season.

A barren spell in front of goal for Coventry’s number 17 negatively impacted the form of the team as a whole, the former Brommapojkarna man failing to score for three months with The Sky Blues picking up fewer wins as a direct consequence.

An outside-of-the-box strike against Stoke City would see Gyokeres break his duck, the Sky Blues man ultimately relieved and overjoyed as that goal was enough to win a hard-fought contest versus Stoke.

It’s safe to say his form in the latter stages of the season hasn’t quite been as electric as his early-season contributions, but 15 goals is an excellent return for a striker who hadn’t found his feet in English football until this very campaign started and Coventry gambled on permanently purchasing him.

With a whole host of Coventry players impressing this season, it will be intriguing to see whether a Premier League club lower down the table might chance their luck at buying Coventry’s new main man up top.

Regardless of whether he moves on or stays put at The CBS Arena, Mark Robins’ side have reaped the rewards for remaining patient and persevering with Gyokeres when other clubs wrote him off.

Purchased for around 1 million when Gyokeres left the South Coast behind for the West Midlands, there’s no doubt Coventry will make a handsome profit if they decide to ever sell Gyokeres. If not, he’s a gamble that proved to be worthwhile for Coventry.