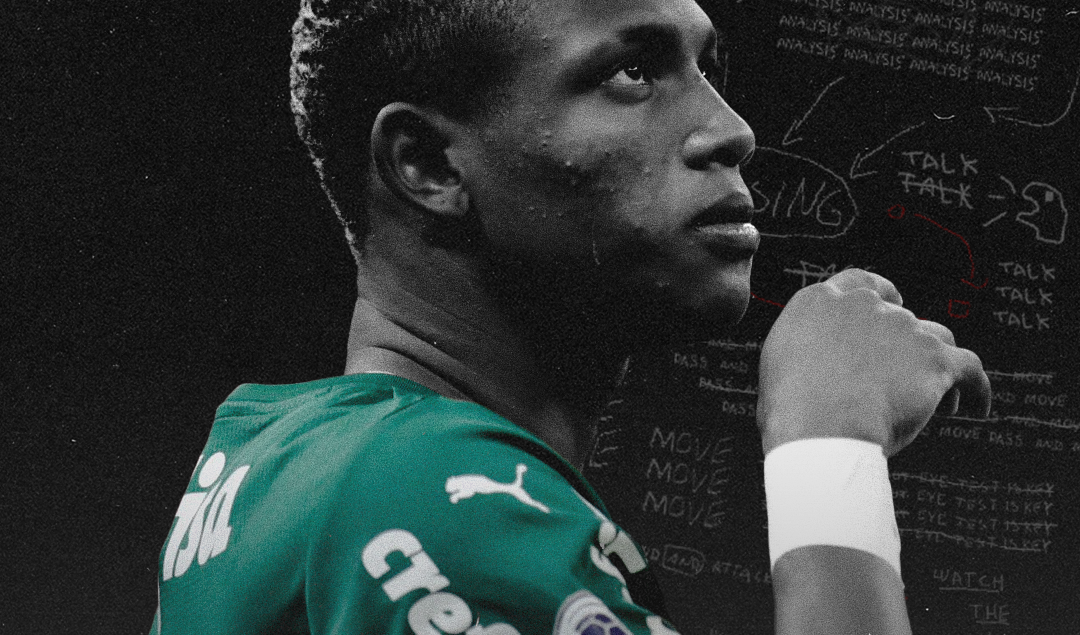 Danilo has been making headlines recently for all the good reasons in Palmeiras. He’s been a regular in midfield for over a year now but what exactly makes him so good that at 20 he’s trusted so much to be the heart of midfield? He’s the youngest player in the starting XI of the side so how exactly did he make it? This article will dive right into that.

Born on 19th of April, 2001 in Salvador in the region of Bahia, Danilo dos Santos de Oliveira always had football in his heart. He started off young in the Bahia youth team but despite trying his best he was let go of at the age of 16.

Having nowhere else to turn to, he opted to join the much smaller youth setup of Jacuipense but left that too and enrolled in PFC Cajazeiras. It’s worth noting that Cajazeiras had only recently been created [2015] with the aim to become the 3rd best team in Bahian football.

Their first ever competition was the 2016 Copa Governador do Estado do Bahia, a regional championship which are quite common in Brazil, with this one in particular involving 8 smaller teams in the Bahian region.

It was no surprise that because of this Danilo was handed his first senior appearance at the age of 17 in the Campeonato Baiano v Conquista. He came on as a sub in that game and his journey changed forever. He was soon spotted by Palmeiras and snapped up initially on loan.

People may be surprised but it’s often in Brazil that regardless of how big a certain club is they are always scouting young talent from all around the country and regardless of the level of competition.

They are willing to give said youngsters a try in their academy because more often than not a certain player may be very good and have all the makings of a star but not have the financial capability to afford himself or via his family a tryout at a certain club because of travel fees, food costs, etc. Such was the case with Danilo who’s proved to be a “diamond in the rough” but it was no easy task.

He initially started off in the U17 squad and it seems as if he impressed as in 2019 he was promoted to the U20s.

It’s worth noting that that same Palmeiras U20 side had the likes of Gabriel Menino [who only recently was getting linked to Chelsea], Patrick de Paula and 4 players who went on to win the U17 WC – Henri, Gabriel Veron, Gustavo Garcia and Renan.

While the last 4 were mostly in and out of the U17 and U20’s because of their young age and ability it’s still impressive that Danilo managed to grab 30 appearances and 2 goals in that side. Still, at the time nobody was looking that much at the young midfielder.

As usual, the start of 2020 is marked by the Copinha – a cup competition for Brazilian U20 teams with most of them being from the Sao Paulo state but others feature as well[Brazil’s biggest clubs’ U20 formations such as Flamengo, Gremio, Internacional, Vasco, Cruzeiro, Atletico-MG and etc. all take part].

It’s considered the most traditional and important youth based competition in Brazil and pretty much everybody watches it. As said, Danilo wasn’t garnishing as much attention and the side overall wasn’t given much of a chance to win the competition.

Patrick de Lucca [who now plays for Bahia] and Gabriel Silva were the two names that grabbed most of the headlines for a side that got eliminated in the quarter-finals. Danilo only started three out of the five games that the side played.

However, it was at that moment that not just Danilo but a lot of other young players in Palmeiras got extremely lucky. On December 15th, 2019 the side announced that Vanderlei Luxemburgo will become the manager for the upcoming season.

Known for his trust in youth, the side introduced a host of youngsters in the side’s pre-season and in the Campeonato Paulista. Gabriel Veron, Wesley, Patrick de Paula, Gabriel Menino and others all got their chances to gradually impress. At the time, Danilo wasn’t one of those chosen.

Patrick de Paula and  Menino quickly stole the show, gradually becoming regulars for the side with the latter quickly being linked to some top clubs around Europe, most notably Chelsea.

Both enrolled into the Serie A season as solidified starters and even when results deteriorated Menino moved to play the RWB role while de Paula kept his spot in the heart of midfield as the side switched to a 3-4-3.

As evident, it was no easy task displacing the other two players who were rated higher at youth level and were already starting but Luxemburgo and most importantly Danilo changed that.

Due to injuries and need of options, the young midfielder was called upon and made the Senior squad for the first time on the 3rd of September, 2020 and he hasn’t looked back since. Thanks to a congested fixture list he gradually impressed, getting more and more minutes to eventually become a starter when De Paula got injured.

The youngster displayed a high level of energy covering space as the pure sitting midfielder although that wasn’t exactly his forte. At youth level Danilo was more of a box-to-box/deep lying playmaker type.

He showcased an ability to beat his man when needed, high intensity, movement and good passing. He wasn’t troubled by tight spaces or pressure as he was a good enough passer to play out of possession.

However, he also proved that he can have an effect in the defensive phase of the game as he showcased a good level of anticipation and ability to tackle/intercept the ball. As he knew this was his chance he focused on the latter and that proved a wise decision.

The season was extended due to COVID and fixtures were piling up yet the young Brazilian had already usurped the spot from Patrick de Paula. Luxemburgo was also sacked but new manager Abel Ferreira loved him just as much.

He valued his ability to carry the ball forward from just in front of the box and spray passes with ease to his attacking options. While Menino kept stealing the spotlight for affecting both phases of the game, at this point Danilo and Gabriel were on par in terms of importance for the side.

Danilo finished the season with 34 appearances, a goal and an assist. As a comparison Gabriel managed 57 with 4 goals and 8 assists. Couple that with Menino’s versatility as he featured for the side at RB, RWB and even RW and you can tell why he was touted as the next midfielder to come out of Brazil.

But still, relatively quietly, Danilo rolled into the 2021 season in a good position and with the guidance of Ferreira things swiftly changed. With time the side adopted a different tactical approach. A 4-1-4-1 was adopted and injuries and NT duty saw Menino less and less involved.

That didn’t worry Palmeiras as they had, you guessed it, Danilo. The player accepted his role as a pure sitter or the classic number six. With the arrival of Dudu the side had to fit 4 very good players into their plan and that saw Danilo sit in behind Ze Rafael and Raphael Veiga [on top of their winger options, obviously].

It was a little odd, as compared to someone like Gabriel, Danilo wasn’t as good a ball-winner but his ability to quickly progress the ball when he wins it and to set-up rapid counter-attacks due to his better passing ability saw him become the aforementioned “anchor-man” in front of the defense.

It’s worth noting that the player was just 20 and as mentioned he was the youngest player in a side filled with veterans but he didn’t look like it.

He averaged 1.1 dribbles per game, a figure topped by only two others in the Palmeiras squad. He didn’t register an error that led to a shot, an error leading to a goal or a penalty whilst also boasting 1.4 tackles won per game and 1.3 interceptions per game.

Danilo’s ability to progress the ball has been lauded above but statistically, it speaks for itself. Of his 30.1 accurate passes per game half were in the opposition half and he even managed to have an average of two big chances created per game.

As he calmly provided what was needed of him Danilo managed to grab 50 appearances coupled with 4 goals and 3 assists.

Just to once again make the comparison, Gabriel Menino managed 36 appearances[2 goals and 2 assists] with 15 of those being as either at right-back, right wing-back or a right winger whilst De Paula had effectively become a backup.

Palmeiras ended the season as third in the Serie A as Atletico Mineiro ran away with the whole lot but they managed to win the most prestigious trophy in South America – Copa Libertadores and against rivals Flamengo to boot.

Danilo started the final and played well as the side adapted a more counter-attacking approach against a team as stacked as Mengao.

Whilst he only lasted 70 minutes on the pitch due to an injury the side ran out victors and the youngster had managed an incredible achievement at just 20 years of age. He had gone from one of the least rated players in a poor Copinha squad to a starter and winner in the Libertadores final.

Despite all of his hardships, at his tender age, the player’s racked up 83 appearances and has become a key member of the side due to his ability and work-rate proving that pretty much nothing is impossible when you want to achieve it.

To top it off he’s also managed 2.6 dribbles per game of which 70% are successful and his tackles sit at an impressive 5.8 of which 52% are successful. All of these numbers are much higher than his numbers at the start of 2021 which goes to show the player’s desire to improve.

He was most recently linked to Arsenal amongst others but Palmeiras wanted to keep the player at least until the summer and although he didn’t end up moving to the Gunners there’s a reason why he’s attracting interest from across Europe.

Although maybe a little raw and with his future maybe a bit further up midfield, Danilo’s potential and ability make him a desirable target and his future seems to be bright it’s just down to him to prove all these clubs right…and judging by the way he’s been “fighting” in his football journey so far, there’s reason to be optimistic he’ll do just that.