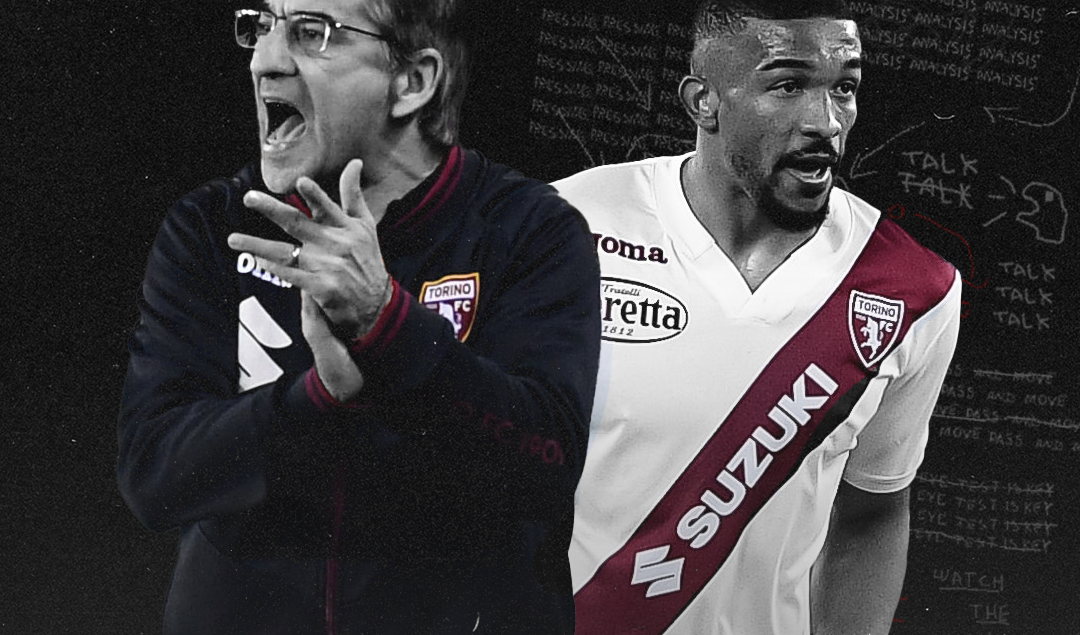 Of course, teams like Inter Milan and Napoli have helped boost that total, but even the lower-performing clubs are helping create excitement this season. Torino may not be challenging for Champions League football, but they are another brilliant team to watch.

On the surface, they look like a simple Italian team focused on defending. Only Juventus and Napoli are conceding less in expected-goals p90, while they’re also 9th in expected goals for p90.

They currently sit 9th in Serie A, four points off 6th. Yet with the boldly dynamic Josip Brekalo, the adventurous play of Wilfried Singo, and growth in form from Antonio Sanabria and Marko Pjaca, Torino are capable of providing fireworks.

These players have combined with Hellas Verona hero and heavy metal nut, Ivan Juric. The 46-year-old Croatian manager led Verona to 9th and 10th place finishes after they were promoted to Serie A in 2019. In his first season in Turin, Juric has installed a dynamic style of play in a 3-4-2-1 system that’s got everyone in Italy talking.

Torino sit 6th in Serie A for possession-adjusted pressures in the final third, ahead of even the likes of Atalanta, Napoli, and Inter Milan. It highlights the approach taken by Juric, in that Torino defend by not letting teams get anywhere near their box.

There’s an element of Bielsa’s Leeds in Torino, in how they take a man-marking approach to try and limit options for the opposition.

It’s similar to the tactics that got Hellas Verona promoted from Serie B under Juric, except this season Torino are bolder at pressing higher up the pitch. It has borne fruit too, with Torino forcing a mistake from Empoli earlier in the season, leading to Tommaso Pobega’s opener.

Spearheading the press from the back three is the Brazilian, Gleison Bremer. The 24-year-old catches the eye on the stats site FBREF, where he’s listed in the top 5% of Serie A centre backs for shots-on-target, pressures, successful pressures, interceptions, ball recoveries and aerials won (all per-90).

Bremer joined Torino in 2018 from Atletico Mineiro, and has been linked to a litany of top European clubs over the past 12 months. At 6ft 2, Bremer possesses the power to score headers from crosses, as well as the subtlety to make smart runs, dummying defenders before challenging for the ball.

He has been shown up defensively at times. While his aggressive style of defending sees him top interception charts, he’s not always quick enough to get back into position. He had a particularly tough time against Beto, when Udinese travelled west in November.

In leading the press though, Bremer has to be commended. Only Fiorentina, Atalanta and Napoli have had fewer opposition touches in their defensive third of the pitch than Torino, and that’s down to the high defensive line led by Bremer sweeping up danger before it reaches them.

Something that stands out watching Torino is the die-hard willingness to make gut-busting vertical runs on counter attacks.

Their central midfield pivot, usually made up of the Serbian Sasa Lukic [25] and Italian Tommaso Pobega [22], in a way has no balance.

Both players are box-to-box runners, each happy to charge into goalscoring territory as Torino fly up the pitch. It’s reflected in the contribution to their side, as both players have 10 goals and assists between them this season.

Though it can leave Torino vulnerable against the big hitters in Serie A, the midfield duo’s runs have been a solid weapon at breaking down smaller teams. Torino have only failed to score against Juventus, Napoli, AC Milan, Spezia, Roma and Inter, five of the seven sisters in Italian football.

At Hellas Verona, Juric’s side preferred to progress the ball through wide areas, flowing play through wing backs Marco Faraoni and Darko Lazovic. Even though Juric has constructed more central avenues of ball progression in Turin, in Ola Aina and Wilfried Singo, Torino have continued the trend set in Verona.

Singo has been one of the standout full backs/wing backs in Italy this season. The 21-year-old has five goals and assists from right-wing-back, and is in the top 40 Serie A players for dribbles completed per 90. Born in the south of the Ivory Coast, Singo left his country for the first time when he joined Torino in 2019.

At 6ft 3, he’s an imposing defender, and builds momentum like a bullet train. A standout moment was his goal against Sampdoria. Singo looked to have punctured a lung in a good 70-yard sprint that saw him ride the wave of a Torino counter-attack before belting a shot through the hands of Emil Audero.

Ola Aina meanwhile has been one of Torino’s best carriers of the ball, with only Josip Brekalo completing more carries-into-the-final-third-p90. Talented on both feet but predominantly right-footed, Aina provides the dangerous threat of an inswinging cross from his position of left-wing-back. Singo often lurks around the back post, hunting for the scraps from the attackers.

The only thing Torino lack in attack is direct passing. They’re 7th in Serie A for carries-into-the-box-p90, but 13th for passes-into-the-box p90. In both midfield and in the rotating cast upfront, Torino could do with a little more patience in building moves.

Marko Pjaca [26] Josip Brekalo [23] Dennis Praet [27] and Antonio Sanabria [25]. Those are four names who you have most likely heard of, and nearly forgotten about. Each one was given the wonderkid-treatment in their late teens, only to stagnate and fade away as they hit their early twenties. Now though, at Torino, they’ve all gone some way to revitalise their careers.

The Paraguayan Sanabria has been helped by the unfortunate injuries to club captain Andrea Belotti, who has played just five games all season. That’s left Sanabria to fill the void up front, and the La Masia graduate is showing signs of the player originally hyped up upon joining AS Roma in 2014.

He may only have four goals this season, but ‘Tonny’ Sanabria has finished cutely against Genoa and Bologna, and hopefully he can better his record season in Serie A of six league goals from 2019/20.

Sasa Lukic sets up Antonio Sanabria to give Torino the lead vs. Bologna 💥

Pjaca similarly spent his younger years at a big club and failed to make any impact. After shining brightly at Dinamo Zagreb alongside Josip Brekalo and Dani Olmo (both 17 at the time), Juventus snapped up the Croatian shortly after he turned 21 back in 2017. He arrived for €23 million, but has only appeared 14 times for the Bianconeri.

After loan spells at Schalke, Fiorentina, Anderlecht and Genoa saw Pjaca contribute to just nine league goals across four seasons, Torino took their turn at loaning in the 26-year-old.

He’s finally found some form, not only scoring three goals but also being devastating in the one-vs-one. No one in the squad is averaging more carries-into-the-box-p90. Pjaca has a great way of carrying the ball at speed before making quick feints or passes.

In Torino’s front three, he has drifted across the pitch but been more dangerous off the left. Empoli found that out the hard way.

You can't let Marko Pjaca cut inside onto his right foot! 🎯

The Juventus loanee puts Torino into a commanding lead over Empoli 🙌 pic.twitter.com/0dA3GPqBOg

The most devastating forward for Torino so far has been none other than Josip Brekalo. Linking up with his former Zagreb teammate Pjaca, the Croatian is Torino’s top goalscorer on five. In Wolfsburg, Brekalo hit 39 goals and assists in 122 games, netting 10 in his final season.

He left under a slight cloud of smoke though, having caused controversy in 2018 for confirming his absence of support for the LGBTQ+ movement, due to his strict Christian upbringing and worldview.

That story caught up with Brekalo shortly after joining Torino on loan, as Italy’s LGBTQ+ rights association called for a meeting with the player after he refused to wear a rainbow armband (as he did so in Germany).

It’s unclear if a meeting was ever arranged, but since September 2021 Brekalo has got on with his football. A clever, technically gifted and confident footballer, what stands out most is his balance. He may lack muscle at 5ft 9, but Brekalo is impossible to shove off the ball and it feels glued to his feet.

With this group of technically gifted footballers up top, it’s a wonder why Torino haven’t scored more. In terms of non-penalty expected goals, Torino are creating as much as Napoli [1.26 npxg p90]. If Torino start overperforming instead of underperforming, they could push further up the table.

Where Will They Finish This Season?

Torino in the 21st century have sadly been far off their historic pedigree. They’re still chasing the glory that saw them win four titles on the bounce in the 1940s before the Superga air disaster decimated their team. Since 2000, Torino have bounced in and out of Serie A and Serie B, and only finished as high as 7th in Serie A.

It’s tempting then, to hope Juric can guide Torino into an unlikely European spot. They only sit four points off 6th placed Fiorentina after all. However, after finishing 17th in 20/21 and 16th in 19/20, Torino fans will just be grateful for this campaign to end as entertainingly and as it has started.