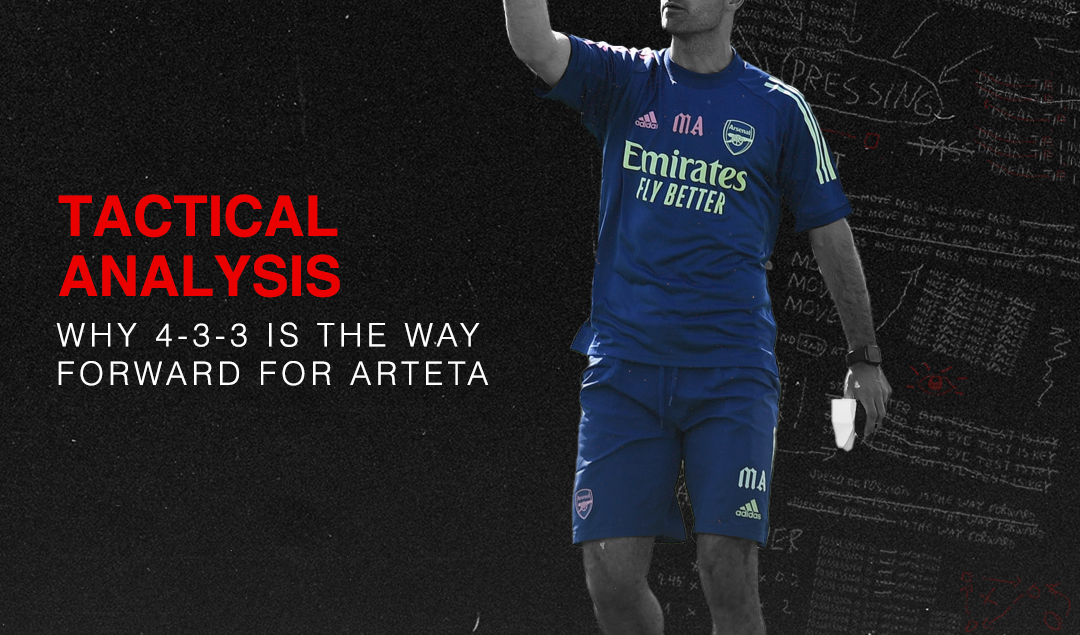 Arsenal enjoyed a mixed first eight months under Mikel Arteta’s leadership. The Spaniard initially employed a 4-2-3-1 formation. His reign started with a lot of promise, but was followed by an embarrassing exit from the Europa League and inconsistent league form. The season was cut short in March due to COVID-19, but after its resumption in June, Arteta primarily used a 3-4-3.

The new formation helped the Gunners end the season with a strong run of results and a noticeable improvement in the big games. The FA Cup and Community Shield wins bear clear evidence of that. The question ahead of the 2020/21 season is whether Arteta should stick to the 3-4-3, or go back to a four at the back formation.

Before we dive into the analysis, we have to note that formation is really only relevant in the defensive shape of a team, as it is directly affected by the number of central defenders in the lineup, hence we focus on the 4 (2 central defenders) or 3 at the back concept. For most head coaches, and especially Arteta, shape on the ball will remain similar regardless of defensive scheme. This will be expanded later on in the article.

First off, we will have a look at the numbers that stem from the formations used. 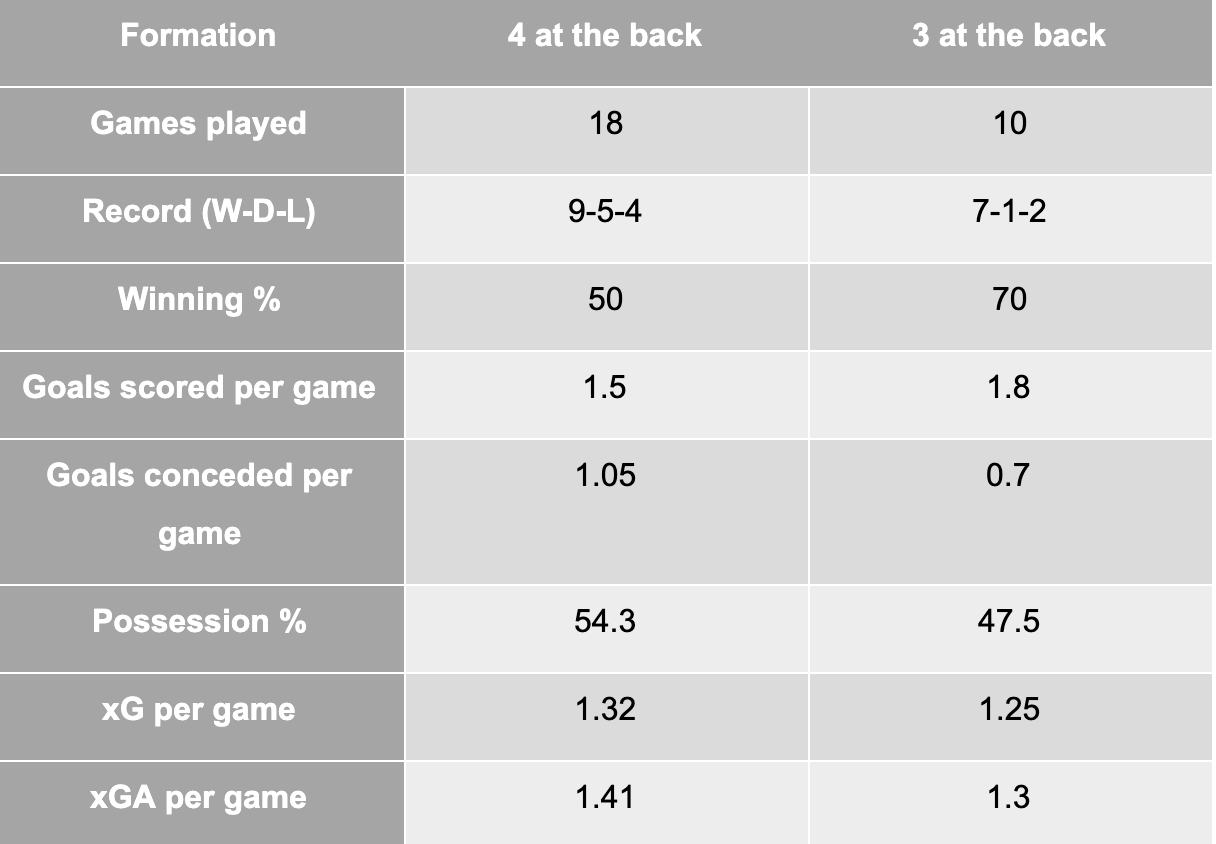 Despite the sample size being smaller, the improvement in results when Arsenal played with 3 at the back is significant, especially if you consider the strength of opposition when using that approach. This could also explain the big drop in possession stats. Attacking output is similar, however there is a clear advantage in the defensive numbers, with 4 at the back having a higher goals-conceded and xGA per game.

It was clear initially that Arteta prioritized getting his most talented attacking players in their preferred positions on the pitch. 4-2-3-1 was a choice primarily made to fit his team’s best creator, Mesut Özil, in the number 10 position.

The formation was used in all of Arsenal’s games from the time the Spaniard took over, up until the Premier League’s suspension in March. Coming back from the break, however, Arteta implemented the 3-4-3, as it became clear that this formation suited Arsenal’s squad a lot better, while Özil appeared to no longer be in the manager’s plans.

The issues mostly lied in the personnel in the defensive and midfield departments. These are areas where the Gunners suffer from a real lack of athleticism, as well as individual quality. They went from defending in a 4-4-1-1 shape, to a much more compact 5-4-1/5-3-2, adding an extra center back. 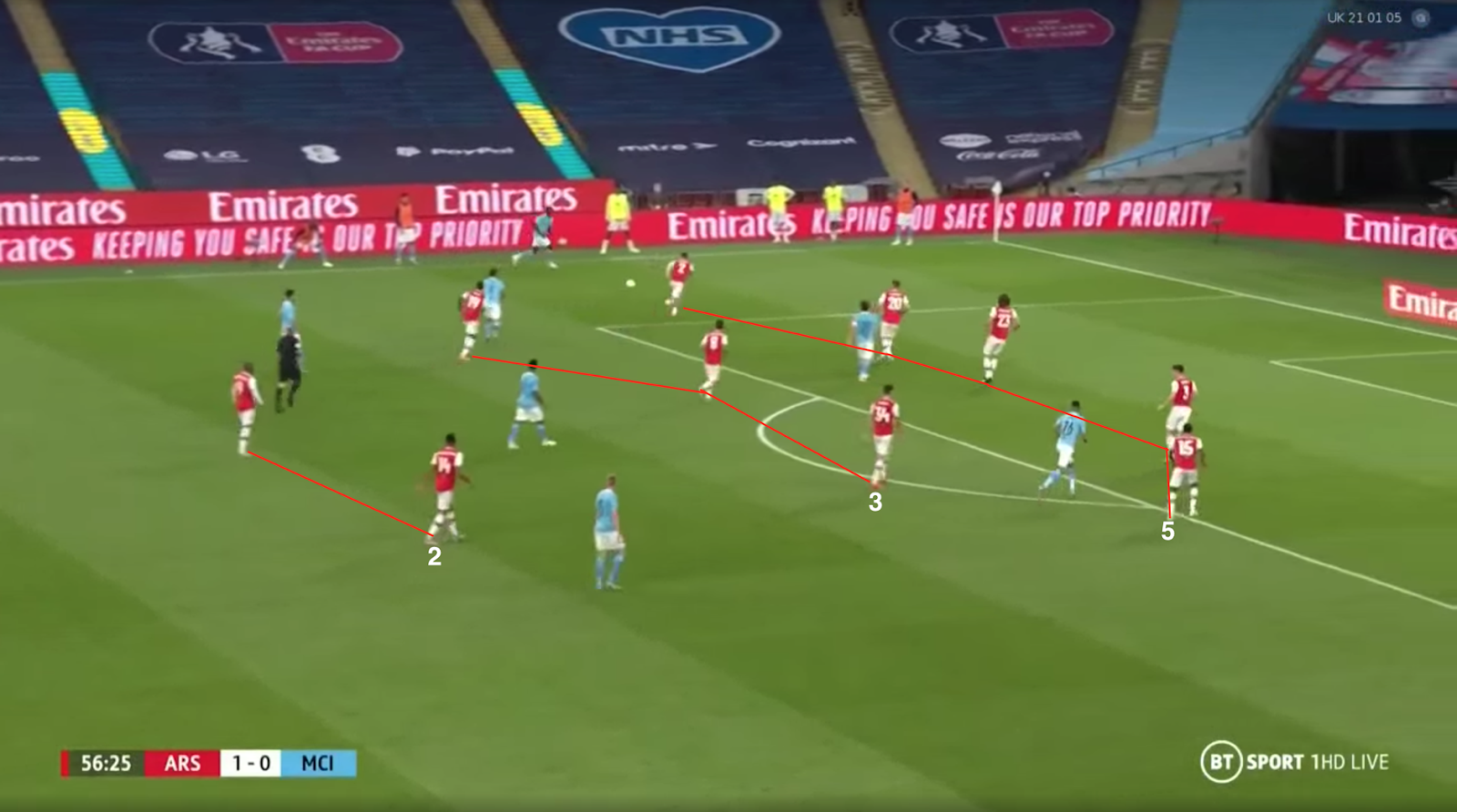 The extra center back, usually Kieran Tierney or Sead Kolašinac, who are left backs by trade, added much needed athleticism next to the slower natural center backs, such as David Luiz. The Brazilian has excelled throughout his career when deployed in the middle of a back three, where he is protected from defending in wide spaces, a major weakness of his.

The use of the 3-4-3 also allowed Arsenal’s attacking wingbacks, Héctor Bellerín and Ainsley Maitland-Niles to get more heavily involved in the attacking phase, without being overexposed when possession of the ball is lost.

Furthermore, the wingbacks were able to step out of the defensive block to defend 1v1 against some of the league’s most dangerous touchline wingers, due to the existence of 4 additional defenders rather than the usual 3.

Despite the clear improvements in the defensive phases of the game, Arsenal had a noticeable deterioration in creativity, especially against teams that defended in a low block. In the games against Tottenham and Aston Villa, the Gunners enjoyed an average of 65% possession, but managed only a combined four shots on target and one goal.

The main issue was an over-reliance on the wide areas for chance creation, due to their one-dimensional midfield duo, that failed to affect the game in the final third, as well as the lack of creative and dynamic players between the lines.

To address that issue, technical director Edu Gaspar has dived deep into the transfer market in order to bring the above profile. The Brazilian secured his compatriot Willian on a free from Chelsea, one of the Premier League’s best creators. Operating primarily from the wings, he created the 3rd most shooting chances of any player in the last league campaign.

The signing of the Brazilian winger opens up a number of interesting possibilities, such as him playing in a more central role in the 4-3-3, as the formation trades a defender for an extra midfielder. Willian not only provides creative capabilities, but his engine and work rate allow him to operate in that position.

In the 2-1 loss against Brighton in the 20th of June, Arteta used Bukayo Saka, a winger naturally, in the left side of midfield in 4-3-3. As Arsenal attacked, Saka drifted wide, while the left winger on the day, Pierre-Emerick Aubameyang, tucked in centrally. This dynamic gave Brighton plenty of trouble in the first half of the game. 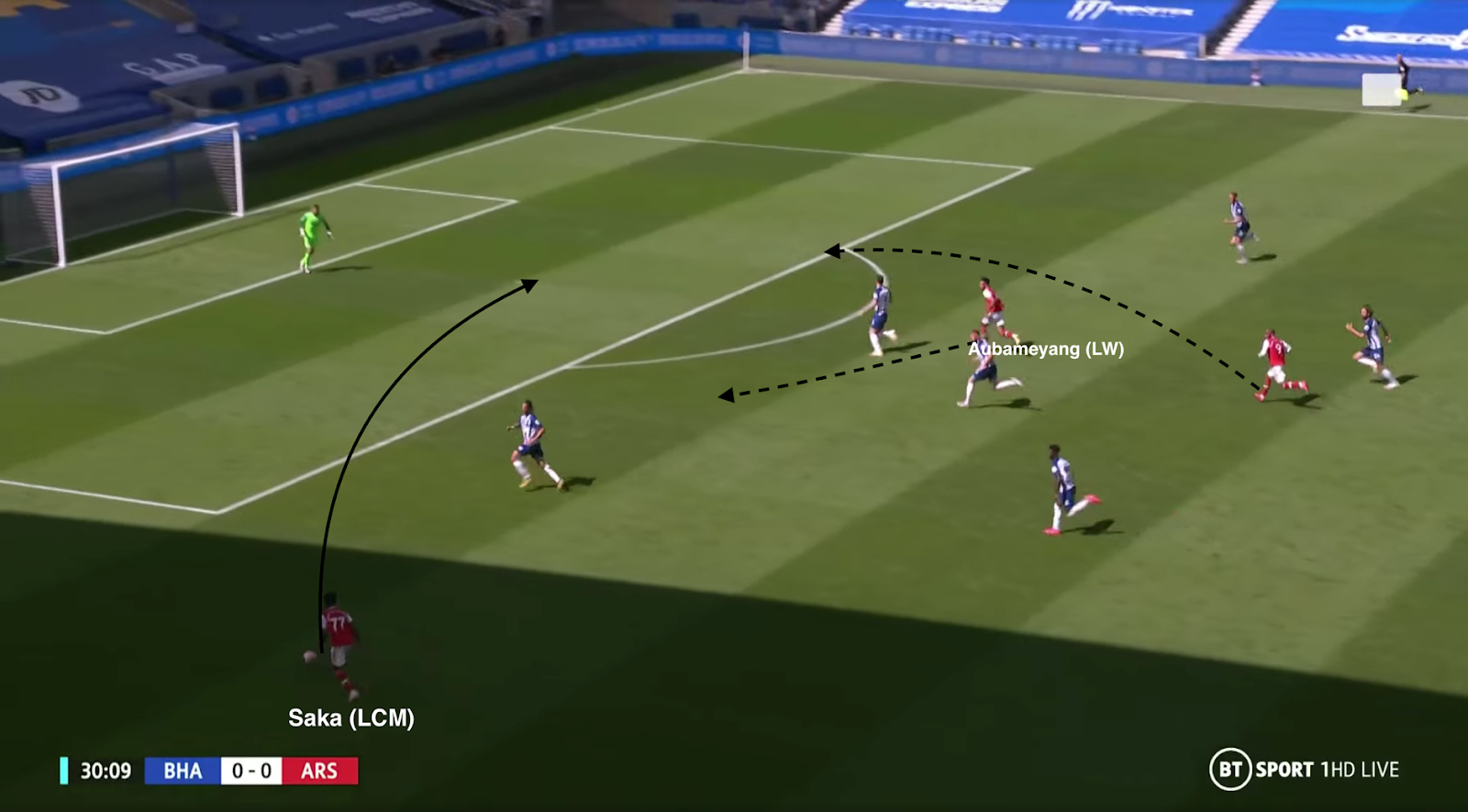 Willian could definitely operate in a similar role as the above photo, as well as on the right side of the midfield three, allowing right winger Nicolas Pépé to come inside.

The transfer window is still open, and Edu is looking to provide another two dynamic midfielders in the mix, with Lyon’s Houssem Aouar and Atlético Madrid’s Thomas Partey reportedly being the two main targets. The two names mentioned, are both versatile players, who can progress the ball forward, create goal scoring chances, but are also adept at blocking space defensively, due to their experience playing in a double pivot.

If the above were to come in before the transfer deadline in the 5th of October, Arteta would have the perfect personnel to implement the 4-3-3. 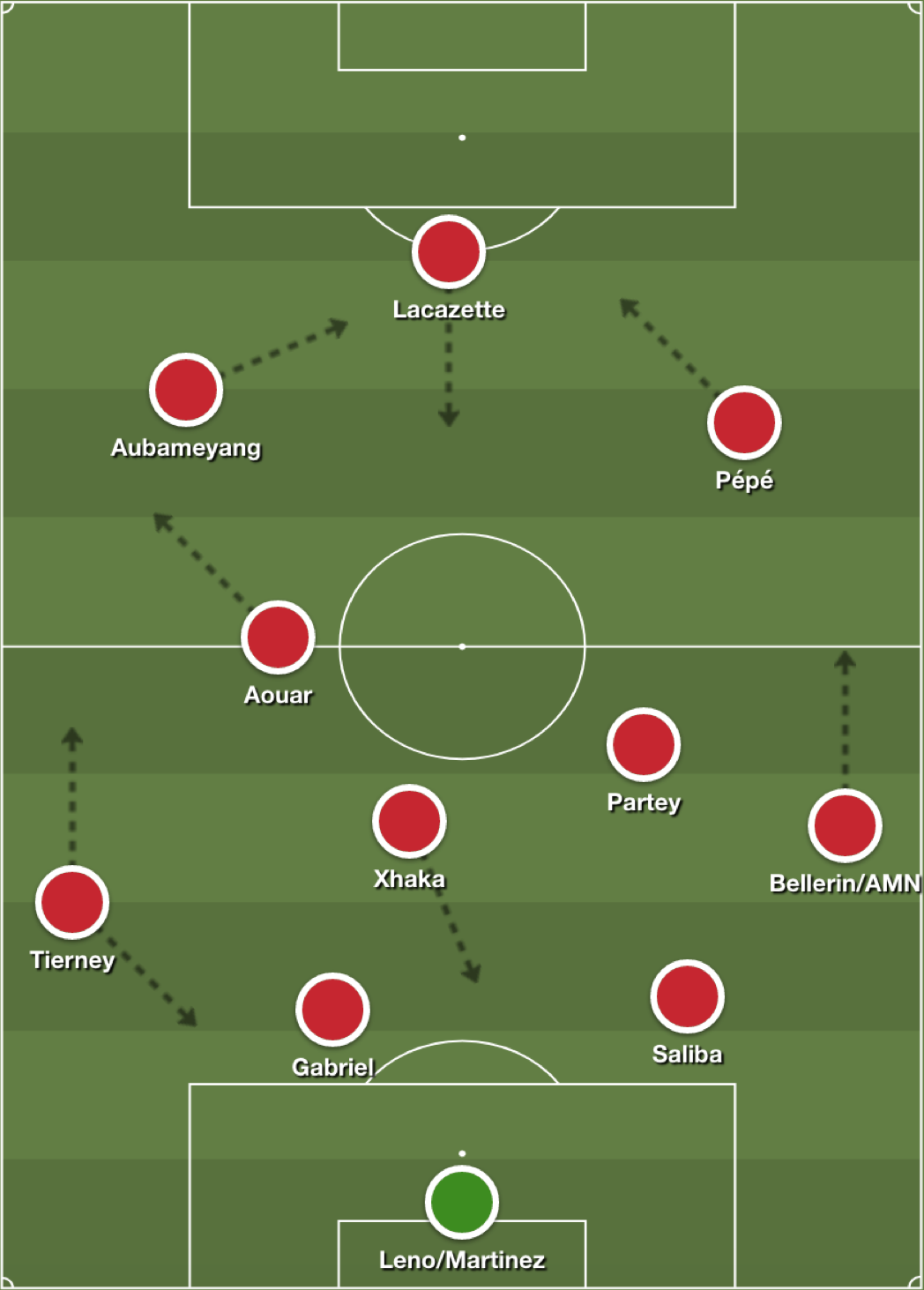 –   Tierney or Granit Xhaka drop to create a back 3

–   Right back pushes up to provide width, Pépé has freedom to come inside

The most successful tactical aspect Arteta has implemented so far at Arsenal is their build-up shape when playing out of the back. It was especially noticeable in their FA Cup semi-final win against Manchester City. 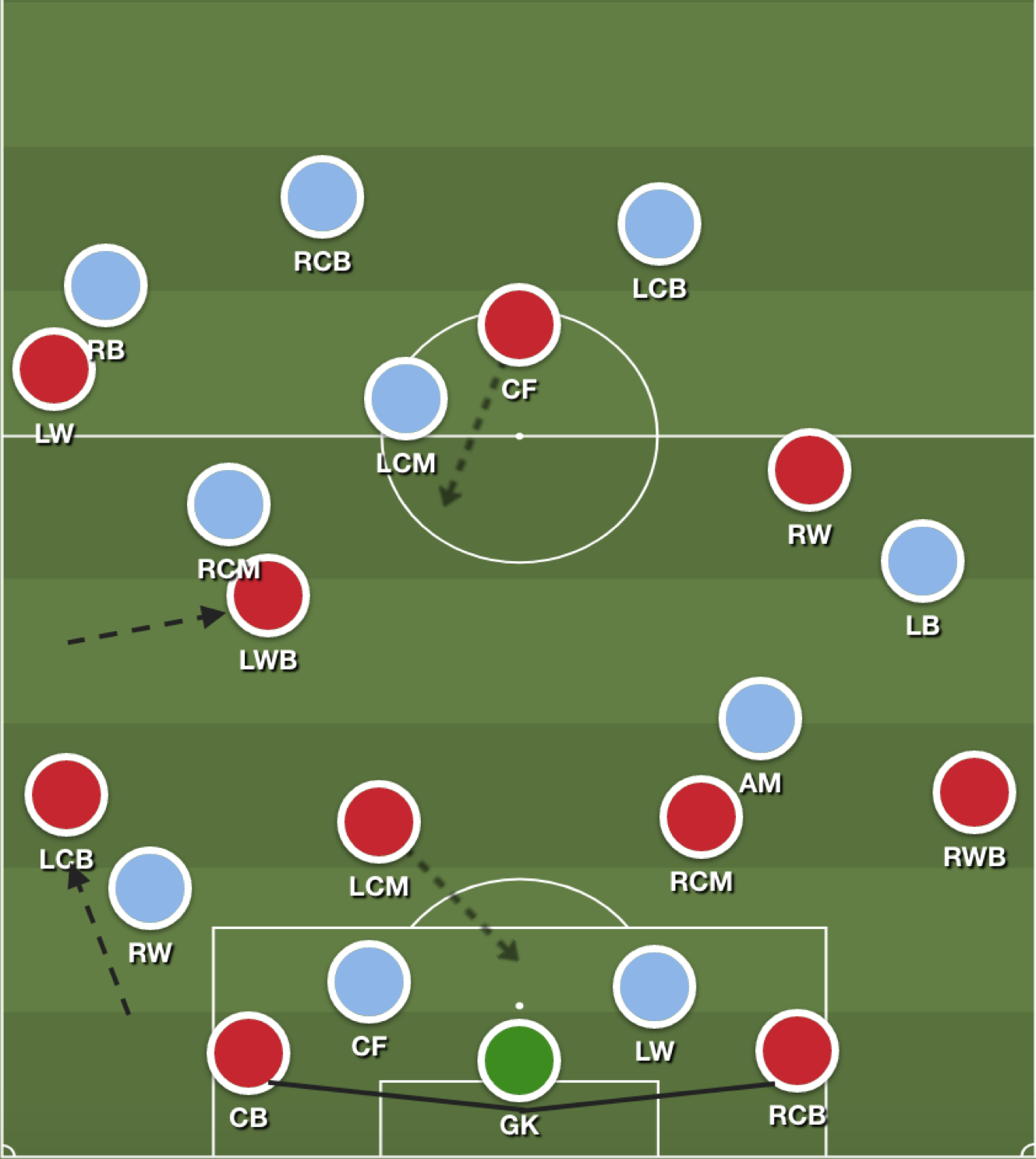 –   One of the central midfielders drops deep to provide passing option

–   Center forward drops deep to link up play, while right winger operates in the right half-space

With this shape, not only were Arteta’s men able to play out of the back successfully, they also created numerical overloads in the left side of the pitch, with Lacazette dropping towards that side. 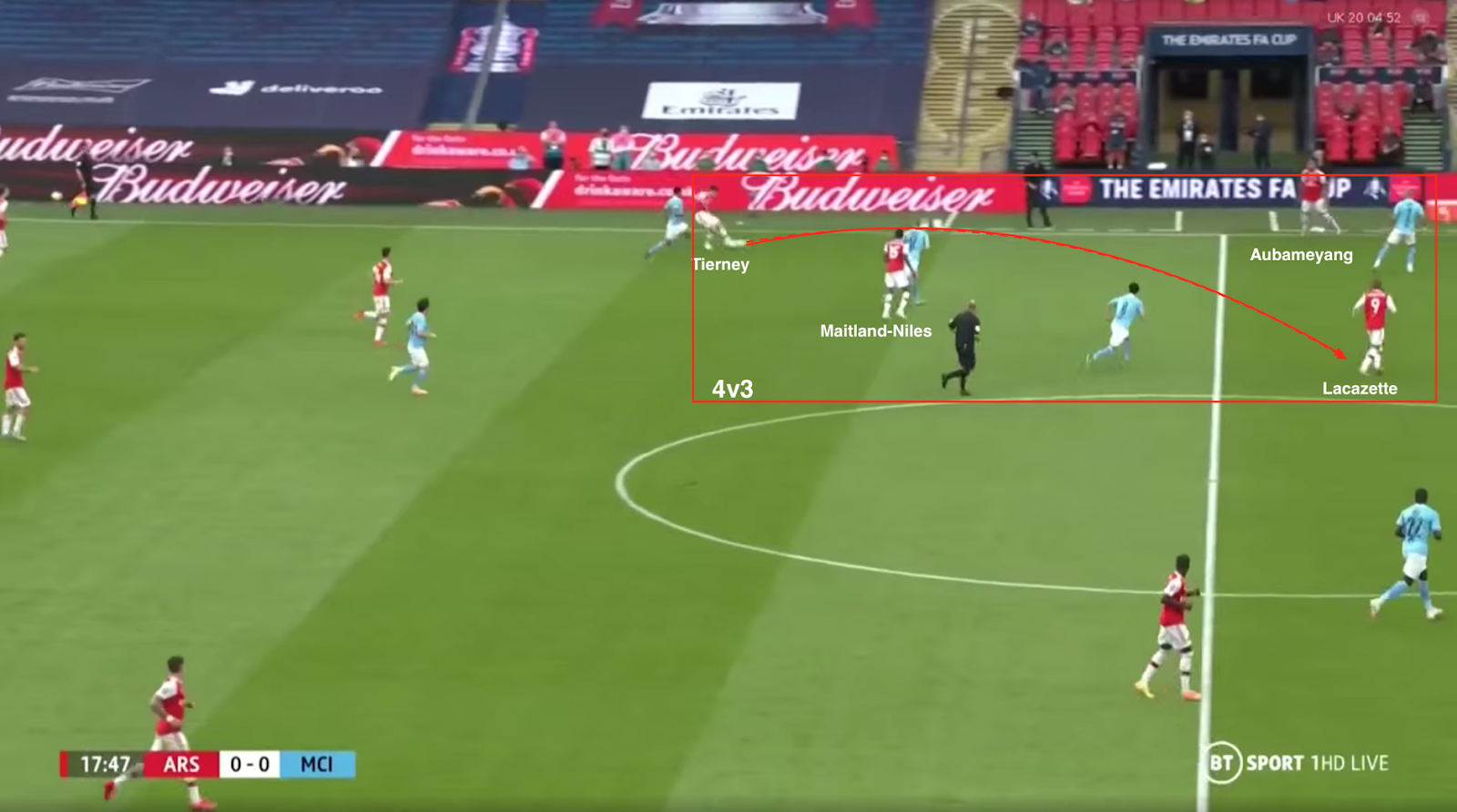 Through the diagram above, it is noticeable that the shape turns into a 4-3-3 variation, so Arteta can still use this successful tactic when sacrificing a defender for an additional midfielder. Quite simply, the left back will take over the duties of the left center back, while the third midfielder is an even better fit for the left half-space, where the left wingback is currently operating.

We have already mentioned how Arsenal improved their defensive block when using three center backs instead of two. However, both Edu and Arteta have already taken steps to solve that problem by adding two athletic and commanding center backs to take over from the likes of David Luiz, Shkodran Mustafi and Rob Holding.

While the new additions, 22-year-old Gabriel Magalhães from Lille, and 19-year-old William Saliba from Saint-Ètienne have not experienced Premier League football yet, they will provide a really good central defence partnership in the long-term.

In Arsenal’s 3-0 loss against Manchester City on the 17th of June, we saw a glimpse of how Arteta would set up a defensive block when using a 4-3-3. 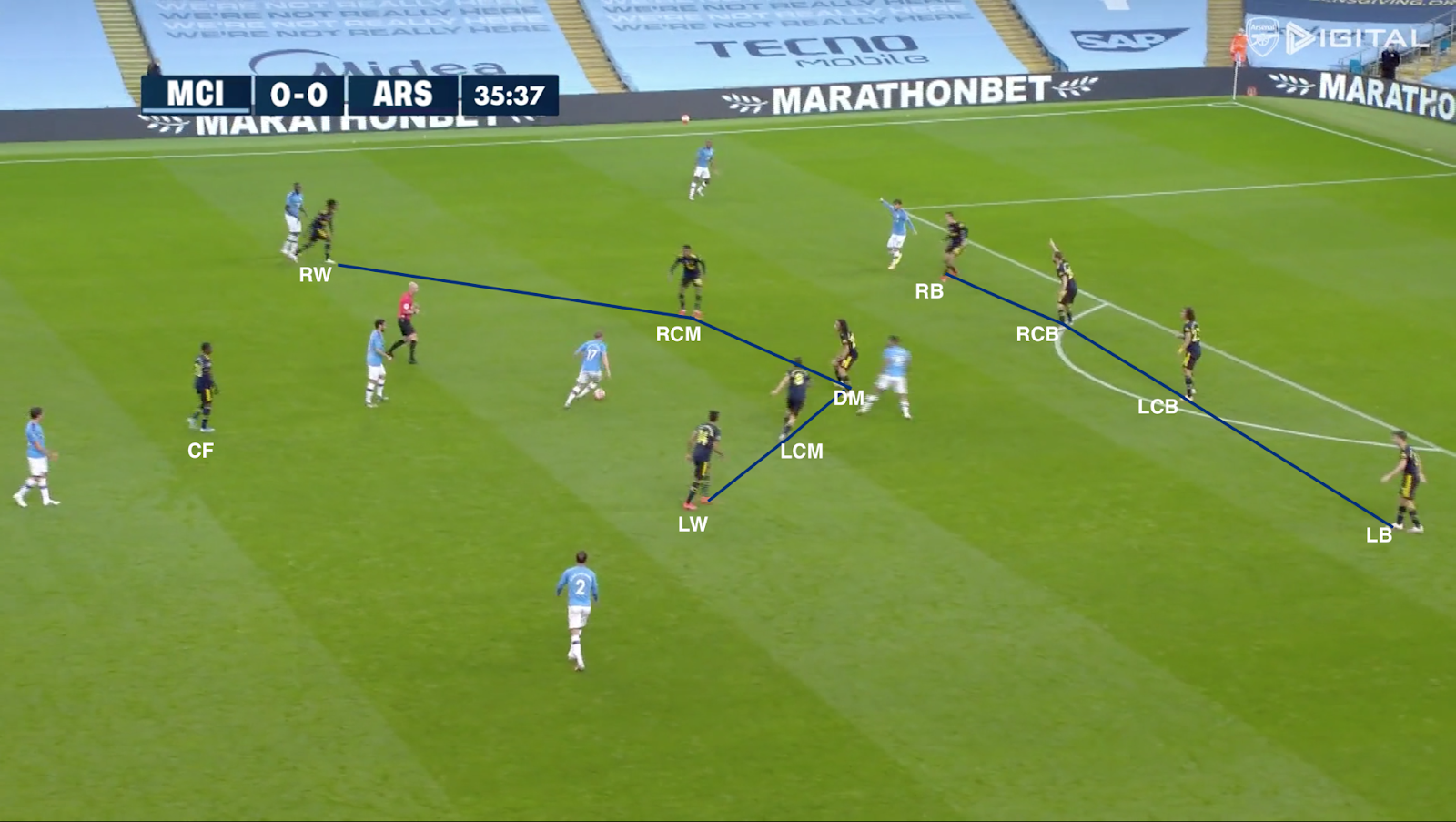 While on the day the approach did not prove to be particularly effective due to an early red card in the second half, results could improve with the more athletic personnel that Arsenal are adding in the transfer window.

Arsenal’s pressing from the front has been another strong point when using a 3-4-3. While the scheme would have to change, it could become even better when using a four man defence. To do that, Arteta would have to take a page out of the book of his former colleague and mentor Pep Guardiola.

In the 4-1-3-2 press, one of the two central midfielders pushes up to support the center forward in the pressing of the center backs. The wingers block the passing lanes to the more advanced players, and are also ready to jump towards the full backs if needed, whilst the other CM presses the opposition’s deepest midfielder.

This pressing scheme is particularly adept at forcing the ball towards the touchline, from where it is much tougher to progress the play forward.

In order for Arsenal to contend for major trophies and the Champions League places, a switch to a 4-3-3 is essential for the team’s progression, in my view. However, if Arteta wants to implement it successfully, he requires the right personnel for it, a need that has to be addressed in the current transfer window.