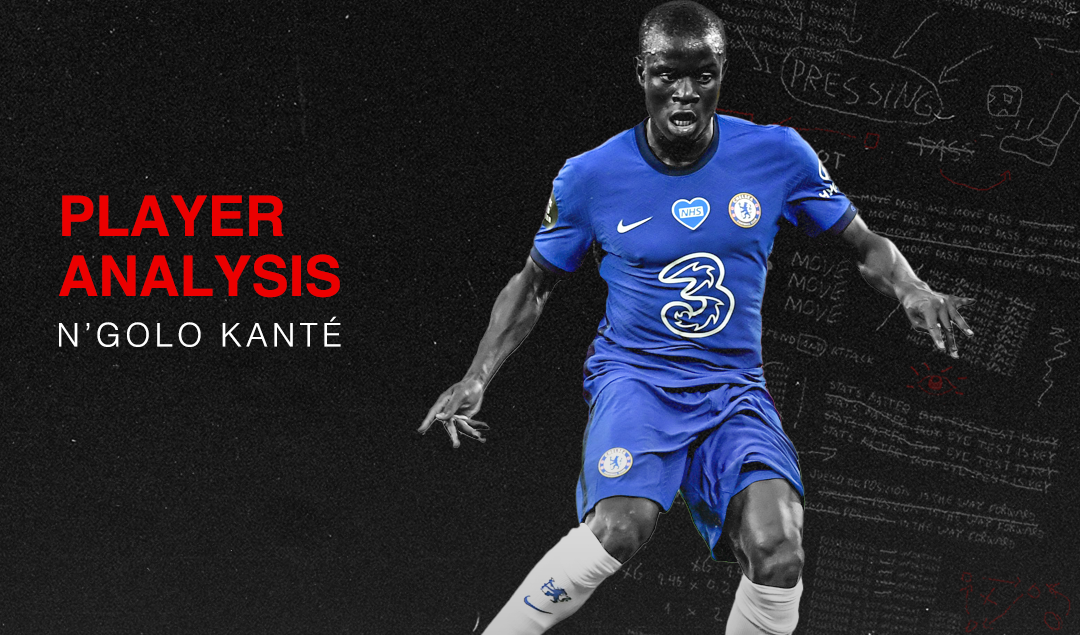 There are no two ways about it: Chelsea Football Club has had an all-time great transfer window. Club director Marina Granovskaia has managed to sign Timo Werner and Kai Havertz—Germany’s two hottest commodities—in addition to Thiago Silva, Ben Chilwell, Hakim Ziyech, and Malang Sarr. All told, Roman Abramovich has shelled out roughly £200 million in transfer fees, and there’s no indication he can’t afford to spend more.

The signings leave Chelsea better off both now and years down the road. But they’ve also tilted a team that conceded 54 league goals last season even further toward the attack. Sure, Silva and Chilwell are defenders, but Frank Lampard is a front-foot manager, and he’ll want to squeeze every bit of attacking talent onto the pitch. That means midfielders running into the box, fullbacks providing width, and some whacky lineups.

A Team in Transition

Lampard has so far built a side that thrives in chaos. The Blues were some of the Premier League’s most aggressive pressers last season, seeking to win the ball high up the field and spark swift attacks. 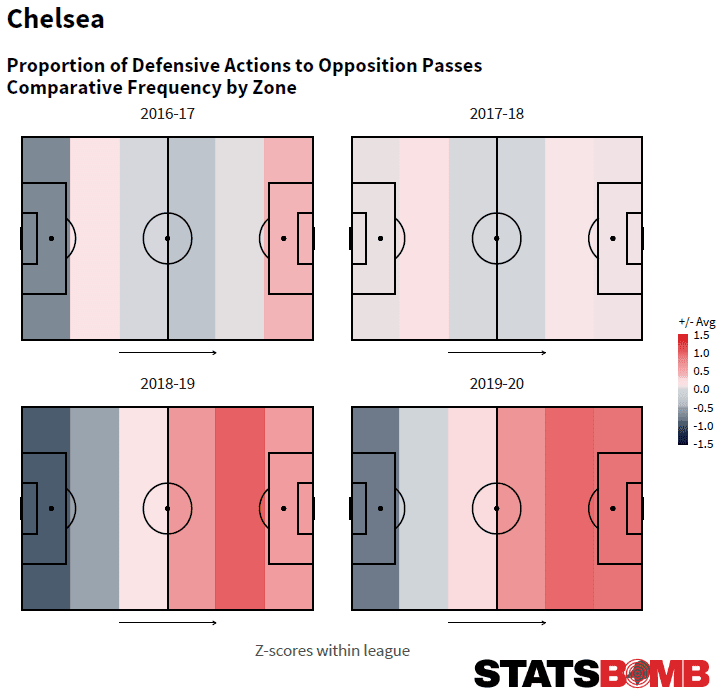 As the pressure data shows, Lampard’s vision came to life, but it wasn’t without drawbacks. The best pressing teams move as compact, coordinated units, retaining their shape even as they chase down opponents after a pressing trigger. Chelsea, though, too often moved as separate lines, evacuating the middle of the field and leaving plenty of space to counter in front of a physically overmatched Jorginho and some shaky center-backs.

The speed with which Chelsea attacked only exacerbated this issue. After completing 600 passes per game at an 86.1% clip under Maurizio Sarri the year prior, the Blues completed about 544 per game under Lampard, with their accuracy dropping to 84.2%.

This slightly more direct style worked, with the team’s xG tally rising from 58.5 to 66.7—just shy of Liverpool—despite the departure of Eden Hazard. But it also meant players bursting beyond the ball in turnover-prone areas, leading to counterattacks the other way.

The team will likely press even higher and transition even faster this season. Werner is a speed demon whose constant running in the channels is most effective when the opposition defense is unsettled. The attacking midfielders, meanwhile, are all high-risk, high-reward gunners who turn the ball over in different ways.

With his ultra-direct dribbling, Christian Pulisic was dispossessed 3.5 times per 90 minutes last year, per FBRef, ranking in the 3rd percentile among attacking midfielders in the Big 5 leagues. Mason Mount shoots the ball a lot, often from far away and into traffic. If Havertz’s arrival pushes the England international deeper, those shots will come from even further away and into heavier traffic.

Ziyech, meanwhile, is one of the most aggressive passers in the world, having completed an abysmal 71.6% of his passes in Champions League matches. His left foot is a wand and he’s going to attempt magic with it every time he gets the ball.

Kanté is the only midfielder on Chelsea’s payroll capable of mopping up that kind of chaos. At his best, the diminutive Frenchman brings an unrivaled combination of anticipation, speed, strength, tackling technique, and endurance. Sarri (and Lampard, so far) have both used that nonstop running vertically, placing Kanté to the right of Jorginho as a mezzala and asking him to lead the press while out of possession and burst beyond the forward line when in possession.

Under Sarri in 2018/19, the former PFA Player of the Year covered the length of the pitch: 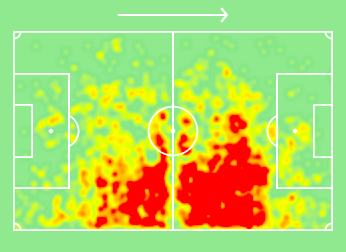 At his peak during Chelsea’s 2016/17 title-winning campaign, he covered the width of the pitch: 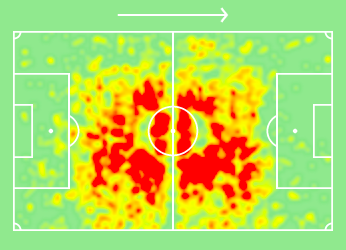 That second heatmap is what Chelsea will need this season. Jorginho is simply neither strong nor rangy enough as a defensive screen to patrol the space Havertz, Pulisic, Ziyech, Mount, and co. will leave in midfield and recover the balls they will inevitably lose while trying to make plays in the final third.

Whether Kanté can still do that job is an open question, too. Now 29, it’s not inconceivable that the staggering amount of mileage he’s put on his body has finally caught up with him. The Frenchman played just over half of Chelsea’s Premier League minutes last season, missing out on large swathes of the season due to nagging muscle ailments—the kind of injuries that can derail a career because of how long they linger.

And for all his acclaim as a two-time Premier League winner and World Cup champion, Kanté has never faced the herculean task of sitting alone behind a high-octane attack. Unlike his contemporaries Fernandinho, Casemiro, or even Wilfred Ndidi, the Chelsea man has mostly played in a duo, acting as the more dynamic partner to stationary players such as Danny Drinkwater or Nemanja Matić. Maybe Mateo Kovačić will play that role this season, but even he likes to drift wide left while in possession and is much more valuable as a presser than a sitter.

You’d be hard-pressed to bet against Kanté, though. If he can stay off the trainer’s table, he is one of the few players in the world with the defensive acumen to cover for his new colleagues and the technical ability to fit in alongside them. For all his struggles nailing down a defined role and shrugging off injuries in Lampard’s first season, the dude’s numbers—especially out of possession—were excellent: 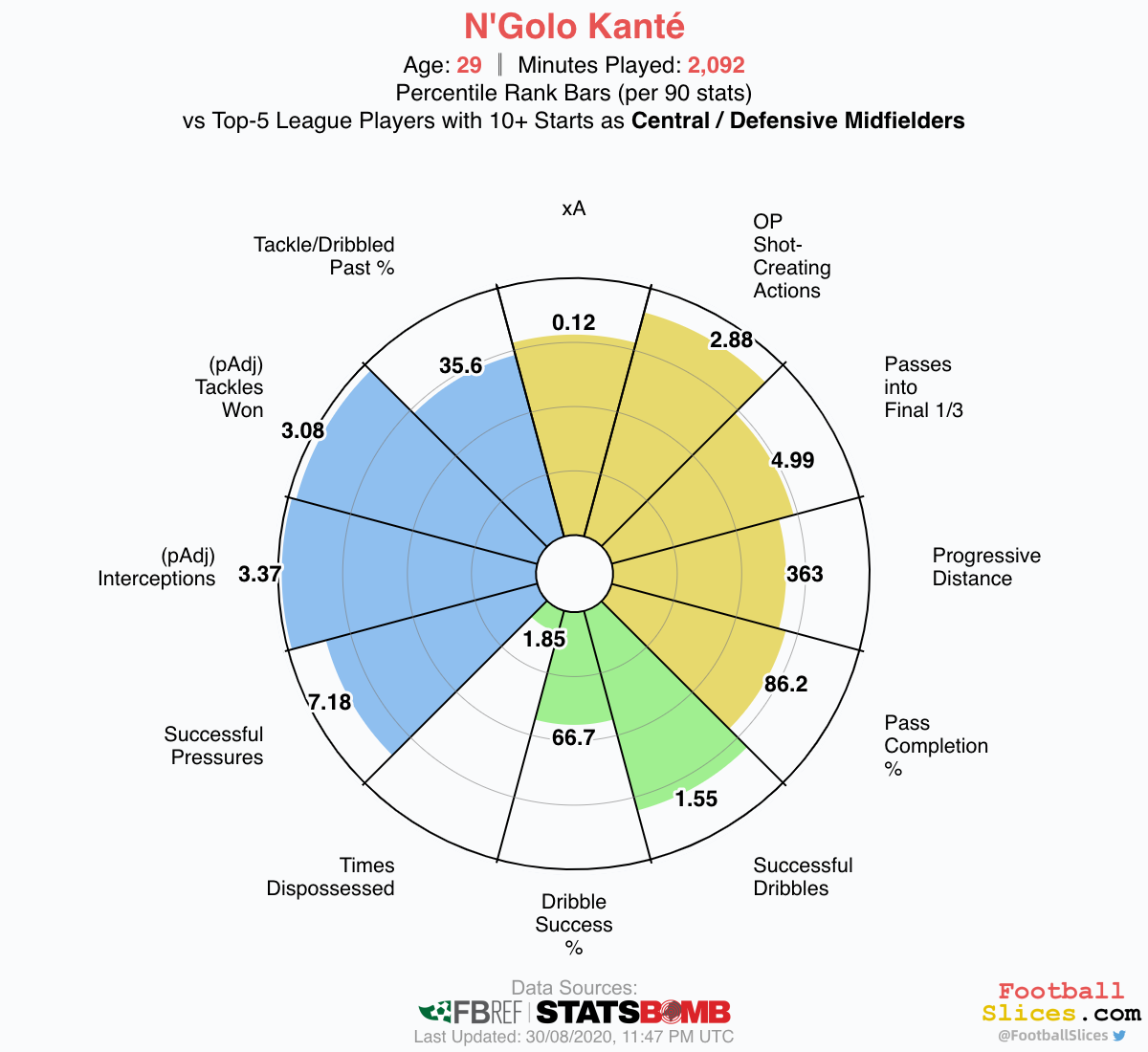 If he can’t shake those muscle problems, Chelsea’s alternatives are Jorginho and the 19-year-old Billy Gilmour, both of whom will need protection from the players ahead of them.

That’s, in part, the secret about Kanté: While primarily a defensive superstar, he’s also the “2-midfielders-in-1” counterweight that allows his team to play a swashbuckling, goalscoring style. The Blues may well give up counterattacks with or without the veteran ball-winner. But only with him can they fully harness their exciting, new attacking talent.

Kanté has played under pragmatists and purists. He’s won English trophies, European trophies, and the biggest of them all. But even after a lost season personally and a host of new faces around him, his name remains the most important on Frank Lampard’s team sheet, and this season represents his biggest challenge yet.